Share All sharing options for: Flyers vs. Penguins: Sean Couturier's favorite player, a playoff anthem, and other assorted off-day thoughts

Evgeni. Malkin. Couturier has been tasked with shutting down Malkin all series long, and not only has he done that from a defensive perspective, he was able to score three goals in Game 2 as he completely took over the head-to-head matchup. (h/t BSH reader PursuitofLappyness for this)

A few more random thoughts regarding Game 2 and the series, including some of the best photos from last night's win, if you'll indulge us after the jump.

Given the unbelievable comeback ability of these 2011-12 Philadelphia Flyers, I propose that this rendition of "The Fire" by The Roots become the official anthem of the 2012 playoff run. Just about all the lyrics fit perfectly with this team and their journey so far this season. A sample:

I never show signs of fatigue or turn tired
cause I'm the definition of tragedy turned triumph
It's David and Goliath, I made it to the eye of
the storm, feeling torn like they fed me to the lions
Before my time start to wind down like the Mayans
I show 'em how I got the grind down like a science

There is something extremely close-knit about this Flyers team. As a fan looking on from a distance, there's something different about this hockey club. I can't quite put my finger on it, but this quote from Zac Rinaldo in his playoff blog over at Philly.com stood out to me:

It was a tough night for me. (Rinaldo played just 4:18 in Game 2) Coach pulled me aside in the hallway after the game. He told me to keep going, that no matter what happens or how much you play, you're a part of the team.

It felt good to hear that. A couple guys talked to me, Claude Giroux talked to me, told me to keep my head up. My London team in the OHL (2009-10) was as tight as can be, and this is really similar to that team.

Maybe there's nothing different about this. Maybe it's just part of being a coach and a teammate. But, well, this picture might explain it better than any words can: 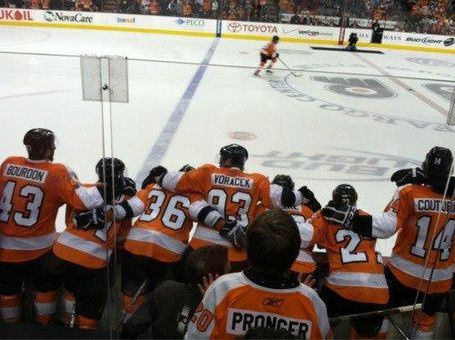 Picture via Twitter (unsure of who posted it originally, let us know if it's yours), taken during the shootout vs. Ottawa on March 31. Not a knock on any other recent Flyers teams, because I'm pretty sure that 2010 team was damn close, but the way this team is defying the odds with so many rookies in the mix and all of the comeback wins, it's hard to imagine there's not some sort of special bond in that locker room.

Can we talk about how much of a bad ass Wayne Simmonds is? Check this video from last night's game, where he mocks Kris Letang's diving antics:

You think that doesn't get under Letang's skin?

Question: Dan, just give us a sense of the emotion after losing a couple of games at home here?

Finally, a collection of the best photos from Game 2: 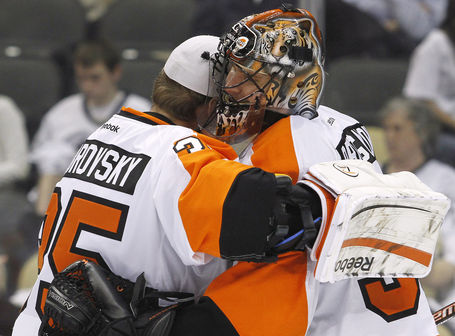 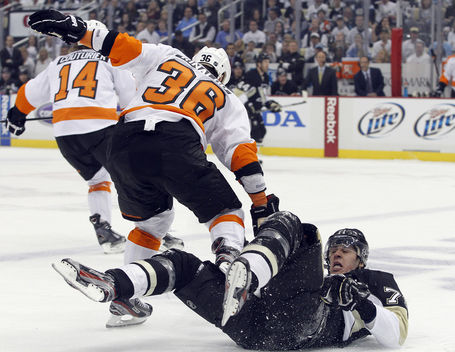 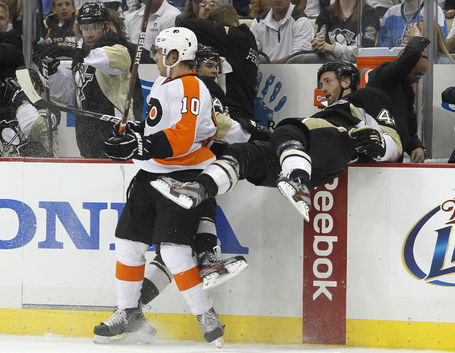 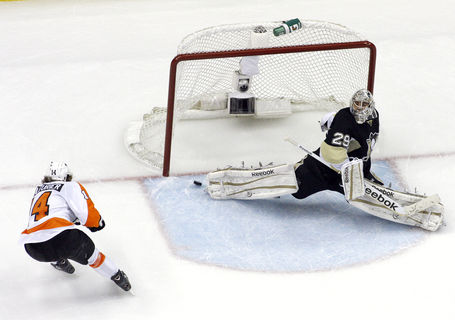