The Flyers are going to play the Penguins in the first round of the playoffs. We all know it at this point, no matter how much you're hoping we tank for the sixth seed. And there are some mixed opinions about this, with some saying that the Pens are still really scary and some saying that we own them right now and we can think that will carry over to a seven-gamer in a couple weeks. I hadn't really seen any articles about what kind of predictive value there is come playoff time in looking at the regular season head-to-head series between two teams that end up facing off in the postseason, so I decided to take a look.

I looked at all 84 playoff series since the lockout (with the exception of the six Stanley Cup Finals series, since you usually only have one regular-season game to reference there) and examined the head-to-head regular season records of each one. It's not a massive sample size, but pulling the data was super annoying and laborious so I stopped at that point. I found the higher seed's winning percentage in games in the regular season, counting all regulation/overtime wins as 2 points, all regulation/overtime losses as 0 points, and all shootouts--win or loss--as 1 point (basically done so in every head-to-head series, the winning % of both teams adds up to 1, because that's how it would work in a playoff series.) Then I took that same higher seed and looked at their winning percentage in said playoff series.

So, for instance, if the higher-seeded team went 3-2-1 with a shootout win and an OT non-shootout loss against a lower-seeded team during the regular season, I counted them as getting five points (two wins, one shootout) for a .417 winning percentage. Then, if they beat that same team in the playoffs in six games, I count them for having a winning percentage of .667 in the playoffs for that series. Not that complicated, right? Let's see what happened.

First, here's a quick graph showing the higher-seeded team's winning percentage in the regular season and the playoffs in all 84 of those series. 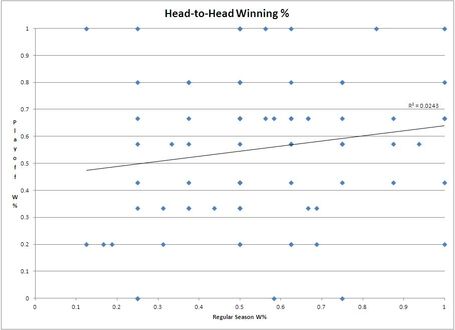 With so much fluctuation across all of the different situations, it probably isn't that surprising that as a whole these numbers are all over the place and there's a super-low predictive value in trying to aggregate all of the results and basically expecting each regular-season series to duplicate itself perfectly in the playoffs.

But if we break it down a bit further, and if we look not at winning percentage within a series but simply whether or not a team won a series, we get some more definitive information. Let's look at those 84 series and divide them into three groups: ones in which the higher seed had a better head-to-head regular-season winning percentage than the lower seed, ones in which the higher seed had a worse regular-season percentage, and ones in which both sides were .500 on the regular season head-to-head matchups.

Very interesting. Let's divide them up even further and see what happens:

So it looks like there's a pretty clear trend there showing that the teams who performed better against their opponent during the regular season have a better chance at moving on, and the teams that didn't are more likely to be upset.

At this point, I figured there were two possible explanations. The first is what we're trying to prove here--that teams that had success against their playoff opponents in the regular season matched up well with them (and vice-versa), and that's why they had a better success rate in the playoffs (or not). The other is that the teams in those first two categories were simply much better teams than their opponents--which is why they won not only the majority of regular-season games but the majority of playoff series as well--and that teams in the bottom categories were much closer in quality to their opponents, meaning that they simply had some poor luck against them in both the regular season and the playoffs.

It's a little inconsistent, but there's clearly a bit of a downward trend in the differences, meaning that it's a fair guess to say that teams that won both the regular-season matchups and the playoff series not just because they matched up well with the team they played, but that they were simply a better team than the teams they played, and as the difference in quality decreased, the winning percentage for the higher-seeded teams decreased as well. My last attempt, then, to try and attribute the trend to either favorable matchups or favorable differences in quality was to figure out whether or not the differences were more pronounced when broken down by regular season head-to-head record than they normally would be. So I looked at those 84 playoff series and tried to figure out the likelihood of a higher seed winning a series based on the difference in seeding between them and the lower seed. That looked something like this: 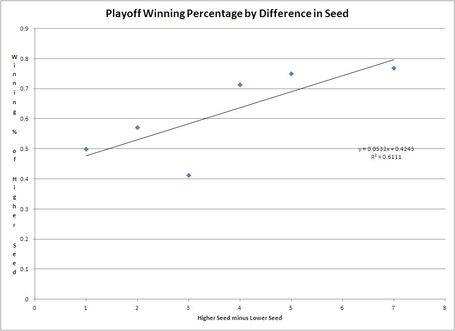 (note: I grouped 6 and 7 together because there's only been one series since the lockout in which the difference in seeding was 6.)

It looks like there's some voodoo going on there in those 1v4, 2v5, and 3v6 matchups, because when the difference between the higher and lower seeds is three, the higher seed is actually LOSING those matchups more often than winning (and NOW you know why we all wanted the sixth seed...) But overall I don't think this chart is surprising: in general, the larger the difference between the two seeds, the more likely it is that the higher seed will move on. That's more or less common knowledge. What I then did was use the difference in average seedings mentioned above and put them on the same graph. If matchups do make a significant difference, then it would make sense for the teams that dominated the regular-season matchups to be above the trendline, and teams that lost the regular-season matchups to be below it. Is that what happens? 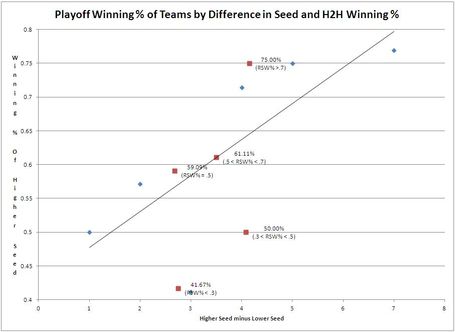 If you want to see that graph in table form, then:

Let's tie this to the Flyers, then. You all remember the first round in 2010, where we got the best possible matchup against a Devils team we went 5-1 against during the season? Yeah, probably not a coincidence that we beat them in five games. As for last year, when we were a higher seed against a Bruins team that went 3-1 against us in the regular season? Again, probably not too much of a surprise that we got wiped out of that series the way we did.

As for this season? If we assume, for simplicity's sake, that whoever wins Saturday's season finale (in a non-shootout) ends up in the #4 seed (ergo, the higher seed), then either the Flyers will be sitting there with a win percentage of .833 (placing them firmly in the top category) or the Pens will be there with a win percentage of .333 (in the fourth category). Either way, the findings shine a bit of optimism on the inevitable first-round series for the Flyers. The Flyers are locked into the #5 seed, meaning that the Pens will be the higher seed in the series. Given that the absolute best that they can do against the Flyers this season, with a non-shootout win on Saturday, is a winning percentage of .333, this places them in one of those two bottom groups there. That bodes well for the Flyers' chances in the first round.