I can't say I've ever had a single thought about Joe Vitale before yesterday. Safe to say that's changed. The Penguins forward took out two key members of the Philadelphia Flyers Sunday in what's almost likely to be just the first of many matchups between these two teams in the next several weeks. One of those hits was clean, and the other ... well, questionable.

Paul Holmgren announced Monday afternoon that Danny Briere will be out indefinitely with what the team's calling an "upper back contusion," while Nicklas Grossman will be out for seven to 10 days with a lower-body injury. (We know it's his knee, guys. You can just say its a knee injury.)

On Briere, the Flyers reportedly said it's not concussion-related, but ... well, out indefinitely is never good regardless of the type of injury sustained. Vitale's hit on Briere in the third period was clean, but it rightfully angered the Flyers in the final minute of a game that was not over.

The point's a fair one that perhaps having Briere -- a player with questionable commitment to defense -- out on the ice in the final minute of a blow out game sends a message to the Penguins, but it's tough for me to square that with putting out a line of tough guys to go up against that unit of Briere, Brayden Schenn and Wayne Simmonds.

One might be a message. The other is a definite message, and you can see why the Flyers were pissed about it regardless of the outcome of the hit on Briere. Now, they'll have to get by without him for at least the next couple of games. Hopefully he's ready in time for Game 1 of the playoffs, which begin April 11.

On the other front, Grossmann's injury seemed much more serious than just one which will take a week to recover from, but perhaps he's just lucky. He caught a knee from Vitale in the first period and had to be helped off the ice.

Here's a look at the hit on Grossman, which you can click to enlarge: 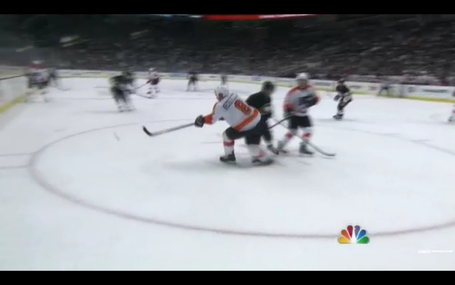 These knee-on-knee hits are always tough to judge. You're trying to gauge intent vs. an unlucky collision. It's not like hittting somebody from behind or anything. Sometimes there's a blatantly out-stretched leg as evidence and sometimes it's more like this hit, where there's literally zero indication that there was any intent. That doesn't mean Vitale didn't intend to hit Grossmann's knee, but ... well, you could never prove it if it were true.

Regardless, it's going to be interesting to see how the Flyers challenge Vitale on Saturday afternoon in Game 82 of the regular season. This has only just begun.