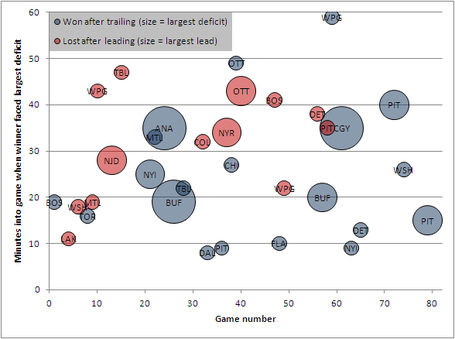 Japers' Rink posted a look at the Caps' best comeback wins. Mimicking how I imagine a lot of people read my articles, I scrolled through the text really fast, got to the chart at the bottom, and said "wow, pretty!"

Above is the Flyers' version. There's a red bubble for every game where the Flyers led at some point and then lost, and a blue bubble for every game where they trailed at some point and then won. The size of the bubble indicates how large the lead got before the comeback started, and the vertical position of the bubble indicates how late in the game the losing team last held that lead.

So for example, in Sunday's game, the Penguins led by two 15 minutes into the game before the Flyers came back, so there's a two-goal-sized bubble for game #79 that's 15 minutes up.

The thing that stood out to me strongest (besides "oh man, that Calgary game was awesome") was that the Flyers have had seven comeback wins since they last blew a lead (Pittsburgh, February 18). It'd be nice to see them start getting some leads, but they've managed to overcome slow starts so far.

(Ed: Picture above is corrected; thanks to commenters for the help.)