The NHL's Final Four, and why the Flyers are really good and always have been

Share All sharing options for: The NHL's Final Four, and why the Flyers are really good and always have been

As you may or may not know, there are now only four teams remaining in the playoffs. While some are convinced that anything short of winning a Stanley Cup represents a failure, I would contend that making it to this final four stage constitutes an indisputably really good postseason, if not a really good entire season.

The NHL then gives these superb final four teams the worst picks in the draft, because they're socialists and that's how they roll.

But what I'm trying to say here is that making it to the final four in the playoffs is good. It's really, really good. It wasn't that special in the Original Six era when it came with making the playoffs at all, but since then it's been something really good.

So which team has been the really goodest of all time since expansion you ask? Well, I'll tell you. 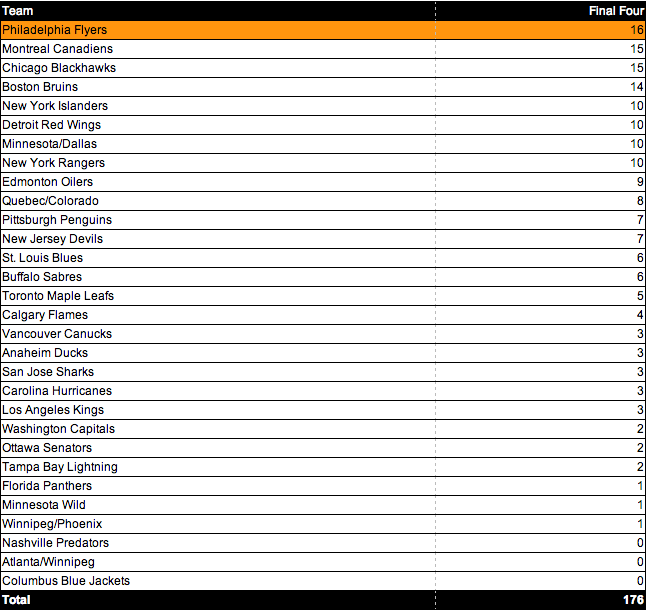 Wow! It's the Flyers! The Flyers are good! Really, really good! And they have been, consistently, forever! In their 44-year existence, the Flyers have never had a stretch of more than five years without a showing in the final four. No other team can come close to saying that. 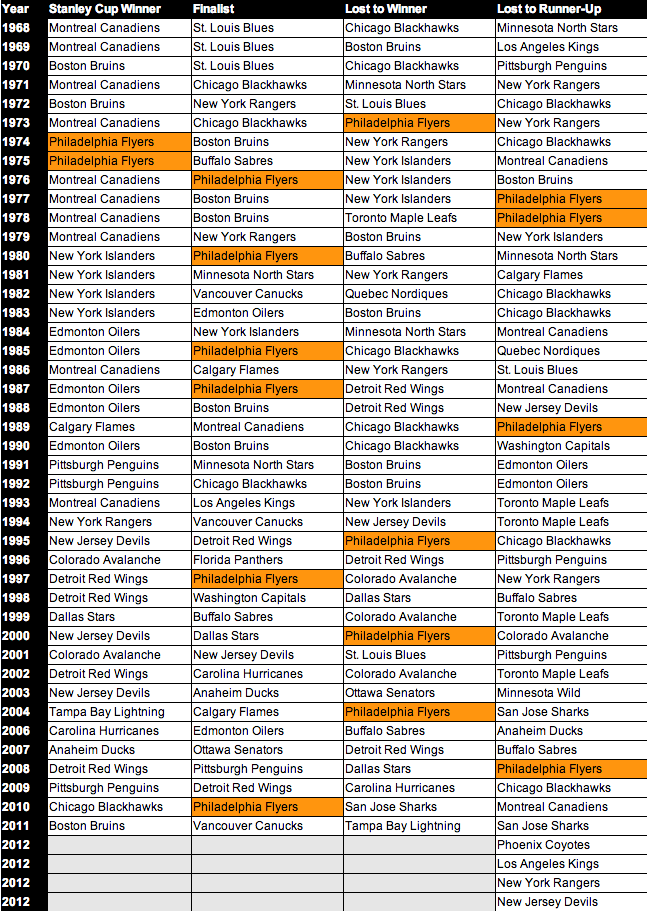 But, as you may notice from that chart (or other knowledge of hockey you had before you began reading this post), the Flyers have not won a whole lot of Stanley Cups. 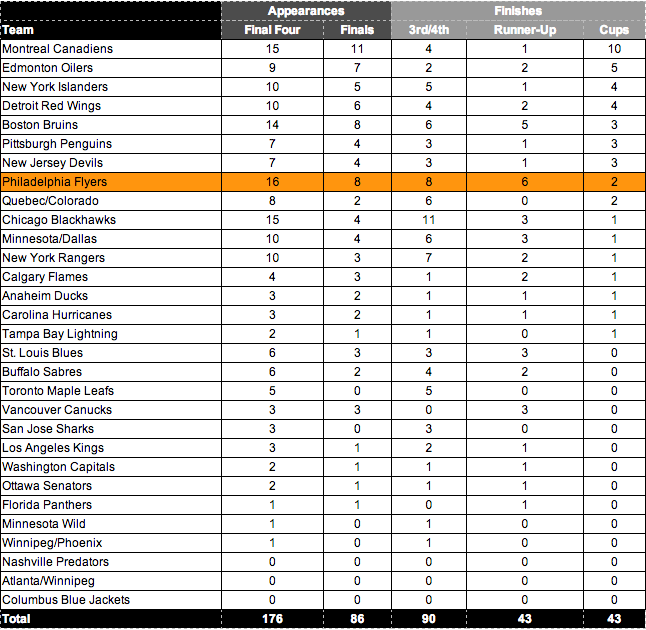 The Flyers have won a Cup only twice despite a staggering 16 final four appearances, which is a fairly devastating conversion percentage when you think about the emphasis put on that far right column. The Devils have just now made their seventh final four, but they could be less than a month from their fourth cup. The Canadiens have a similarly absurd batting average, winning the Cup in 10 of 15 final four showings.

So that part isn't great. But still, though the Flyers have rarely won it all, their ability to have "really good" seasons shouldn't be scoffed at. They do it all the time, and it makes being a fan of this team a consistent pleasure. Since first making a final four in the Nixon administration, the Flyers have made a final four during every subsequent administration (or Olympiad, to use a different but similar measure).

Let's look at some other teams on that table. The Los Angeles Kings, who seem to be completely incapable of not winning the Cup this year, have only made the final four three times, despite being the same age as the Flyers. The Caps have only made the final four a pathetic two times in 36 years, in just 5.5 percent of their seasons -- compared to 37.2 percent for the Flyers. 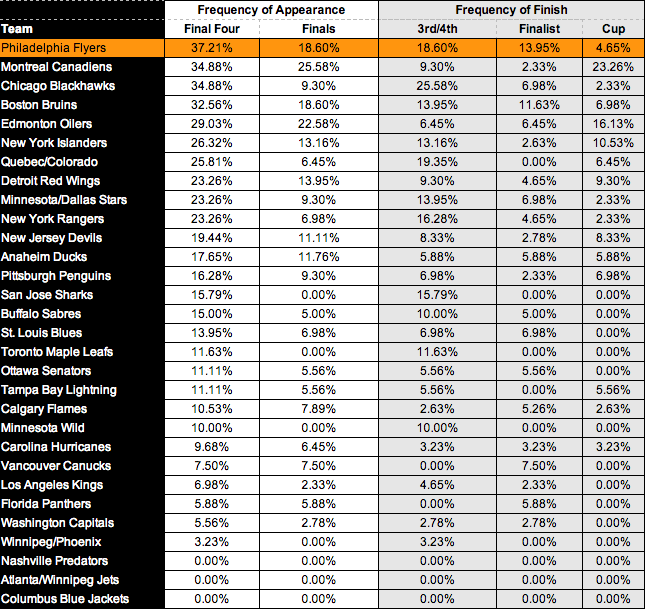 Put another way, the Flyers have made it to the final four an average of once every 2.7 seasons, which is really, really good. 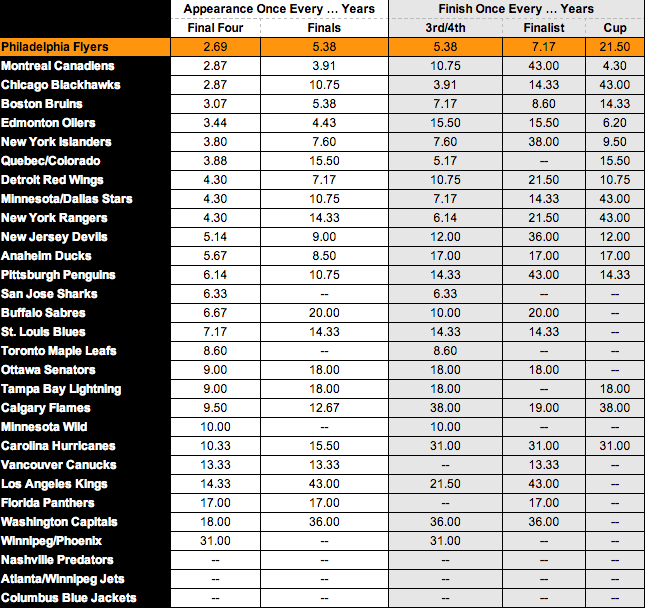 Maybe you're thinking that the time frame I chose is deceptive, going by expansion to include all the Flyers glory years. Well, here is how the top of the final four appearances standings would look based on some other (mostly arbitrary) possible starting dates for counting.

1975: the first season with four rounds in the playoffs, when you actually had to win a lot to make the final four ...

Pretty good, eh? How's 'bout another cutoff date, this one past the Bullies era?

Look at that, the Flyers are still on top. Let's go even more recent, shall we?

OK, the Flyers are no longer in first, but being (tied) for second best behind the consensus greatest team of the last couple decades isn't too shabby.

Back in a tie for first. Pretty awesome.

In conclusion, the Flyers have always been really good, and are probably the really goodest team ever. They may not have been the absolute best as much as anyone would like (or maybe even as much as they've deserved to be), but it's still really good, and something to be really proud of.

Not only are the Flyers always in "win now" mode, they manage to "win always." And that's really good.