Earlier today, Travis posted a video breakdown of how Danny Briere prematurely abandoned the defensive zone, then made only a half-hearted attempt to return to the zone, gift-wrapping the third-period game-tying goal for Adam Larsson and the Devils in Game 2.

Of course, that might not have even been Briere's worst defensive effort of the night. This one is also a strong contender: 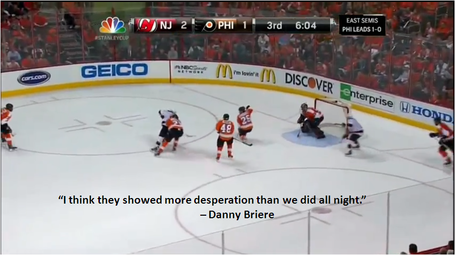 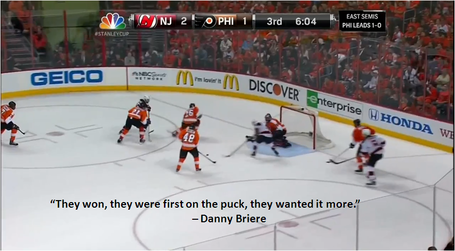 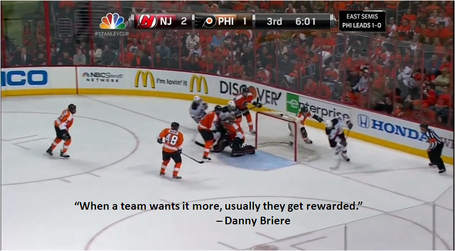 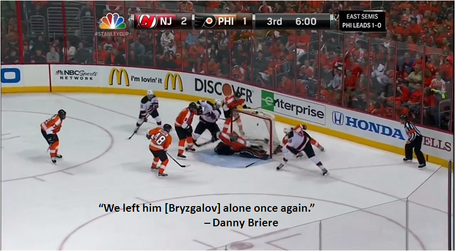 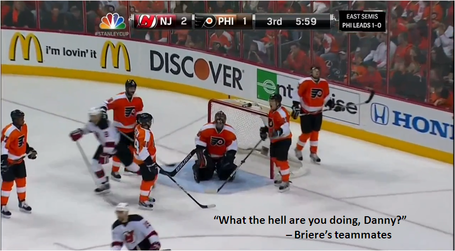 OK, I don't know for sure about that last quote. But Erik Gustafsson is definitely saying something, and the other guys have the look.

He had less than four minutes of ice time in the period before this shift and was only 20 seconds into the shift when he camped out in the slot, so this isn't a fatigue issue; it's just plain old laziness and disinterest in defense. From someone who's talked about as a candidate for the captaincy, someone who should be a role model on such a young team. Someone who is widely praised for elevating his game in key moments.

It's unacceptable for him to stand flat-footed in the slot for five seconds watching the play break down and never so much as skate a single stride even as the puck passes within arm's reach of him. And it's particularly galling to see him turn to the media after the game and say the team lost because the team didn't want it badly enough.

Watch the video, Danny. There may not be an I in team, but there should be an I in any sentence you construct about who didn't fight for the puck and support Bryzgalov last night.