It's time to continue our year-end review of the zone entry data that Geoff tracked for us. Last time, we looked at individual puck-handling: how often a given player brought the puck into the offensive zone and how effectively they did it.

In this article, we will try to get a sense for off-puck and defensive contributions by looking at all of the zone entry data with a given player on the ice.

With our zone entry data allowing us to separate the game into a series of short stretches between zone entry and clear, we can calculate each one of these stats, and we have. If you were wondering, this year the Flyers' opponents got 0.63 shots per entry with possession when Andrej Meszaros was on the ice, for example.

It's not hard to see how the data could rapidly become overwhelming, with each of these stats calculated for each player's ice time. As we did in part two of this series, we'll start by narrowing things down to focus on just the stats that appear to be reproducible talents. If you give me a stat calculated from the odd-numbered games and I can't predict the results from the even-numbered games, then that stat probably doesn't reflect anything the player did right or wrong, at least over this sample size.

So which of the stats we've calculated have strong odd/even correlations? Not very many, as it turns out. Out of all of the stats listed above plus some others that I calculated, the only ones that are unequivocally reproducible at this sample size are:

That's it. You may notice that all three of those relate to neutral zone play; none of the differences between players in the attack zone metrics appeared to be reproducible. This seems pretty surprising; is it really possible that Claude Giroux's line possessing the puck in the offensive end is no more likely to generate a shot than Zac Rinaldo's line? 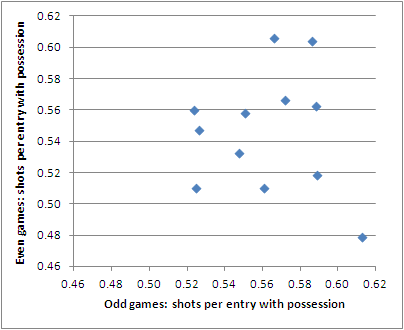 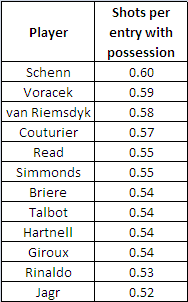 On the left, the odd/even correlation plot shows that there is essentially no correlation between how a guy did in the odd games and the even games -- if I tell you that he was at 0.59 for the odd games, you still don't know whether he would be at 0.52 or 0.60 for the even games. It would seem that over this sample size, random fluctuations are larger than the differences in talent, surprising though that may be.

On the right, the table of year-end totals shows that this is not because the fluctuations are large; it is because the spread is small -- almost everyone on the Flyers gets between 0.54 and 0.58 shots per entry with possession. With everyone falling in such a narrow range, it takes a large sample for a talent to be unequivocally identified.

So the story here is not that Rinaldo is better than Jaromir Jagr at helping his team get shots from their trips to the offensive zone; the story is that surprisingly they are similar enough that a year's worth of data is not enough for us to distinguish them.

The analysis for all of the offensive and defensive zone numbers works out the same way. And when I aggregate them together to get an offensive (or defensive) zone score based on whether they got (or gave up) more shots per entry than the average, that doesn't look like a reproducible talent either. The reason Rinaldo's line doesn't generate much offense is that it rarely wins the neutral zone and virtually never manages to carry the puck in when they do, not because they are particularly inefficient with their offensive zone possessions.

The numbers might still be interesting to look at, but we have to treat them as descriptive rather than predictive -- they describe what happened this year, but just like Ilya Bryzgalov's poor save percentage in a single season did not mean he is a bad goalie, we need to be hesitant to judge talent from this sample size.

In the plot below are the players' composite offensive zone and defensive zone scores for this year. They are calculated by combining the metrics as shown in the graphic at the start of this article; a +0.4% offensive zone score means that the team's results in the offensive zone with that player on the ice were good enough to boost their fraction of the shots taken (their Fenwick score) by 0.4% compared to their average result. 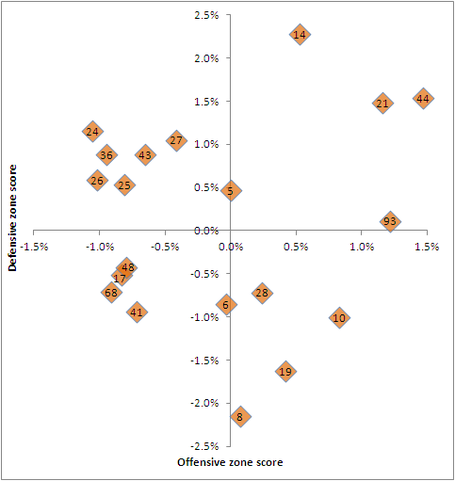 This plot lets us see who was most successful in the offensive and defensive zones this year, even if our ability to make predictions is still limited. Fortunately, unlike the attack zone results, several neutral zone metrics did show up as being clearly reproducible at this sample size.

Here's how the Flyers performed in the neutral zone with various regulars (at least 300 minutes of even strength ice time) on the ice:

Although the results are reproducible for both forwards and defensemen, the spread in talent -- or perhaps the individual's ability to influence the neutral zone outcomes -- is much larger for forwards than for defensemen.

The puck-moving defensemen show up with a modest advantage in the neutral zone results because the team wins the neutral zone more often with them on the ice; the Flyers got 52.6% of the entries with Matt Carle on the ice, 52.2% with Kimmo Timonen on the ice, and 51.3% with neither of them. However, neither of them compounded that edge by retaining possession on substantially more of their entries than the opponents did.

This analysis is quite counter-intuitive, but it appears that shot differential is heavily influenced by neutral zone outcomes. We can't rule out the possibility that a team's system impacts their attack zone results, and I am hesitant to generalize to a universal claim based on a single team's data. But at least for this team, this year, there was little difference in attack zone results between individuals. Individual player skills appeared to have the most impact on the neutral zone play, with the attack zone results often following as a natural outcome from success or failure in the neutral zone.