Share All sharing options for: Pros and cons of trading James van Riemsdyk for Luke Schenn

Now that we've taken a little over two days to digest the James van Riemsdyk for Luke Schenn trade, I think the general consensus -- whether you agree with the deal or not -- is that we don't truly know how this deal will shake out. That's true of most trades, of course, but it's particularly true with this one.

van Riemsdyk may never live up to a hefty contract he signed last summer -- one that was handed to him based solely on potential, not what he's done so far in his career. Schenn took a huge step back in his development last year and may never live up to the potential that's made him the 5th overall pick in 2008.

On the flip side, van Riemsdyk has shown signs of growth since signing that big contract last summer and Schenn is still just 22 years old. There's risk here for both teams, and that means there are both pros and cons for the Flyers now that they've finally pulled the trigger on this long-rumored trade.

Pro: The Flyers have traded a strength for a weakness. It's not a secret that the Flyers are one of the deepest teams up front in the NHL. It was that way when Jeff Carter and Mike Richards were here and it's true post-Richie/Jeffie as well. Losing James van Riemsdyk hurts in the scoring department, sure, but the Flyers proved during his injury-riddled 2011-12 season that they can still be among the league leaders in goals per game without him.

The Flyers are strong up front and without Chris Pronger, their biggest need is on the blueline. The Flyers quite obviously gave up something to get something in this trade, but they dealt from a position of strength to gain something that balances out their biggest weakness.

Con: van Riemsdyk is a top-6 forward at worst. Schenn? Young James has established himself as a solid scoring winger in the NHL. He wasn't necessarily always a top-6 guy in Philadelphia, but this might be the only team on which that would hold true. He certainly is a top-6 guy in Toronto. He's yet to establish a No. 2 overall pick type game, but he's not going anywhere. Meanwhile, Schenn was a bottom-pairing guy for the Leafs last season. A healthy scratch at times, even. The Leafs, you guys. Tons of question marks surround his game.

Pro: The Flyers have acquired a better contract. It's not a ton, but the team shed $650,000 against the cap in this deal. That could mean the world at some point in the future -- you never know. It's more than a league minimum contract. And even better, the Flyers now possess the better of the two contracts here. van Riemsdyk is signed for $4.25 million until 2018 while Schenn is signed for $3.6 million per year until 2016. 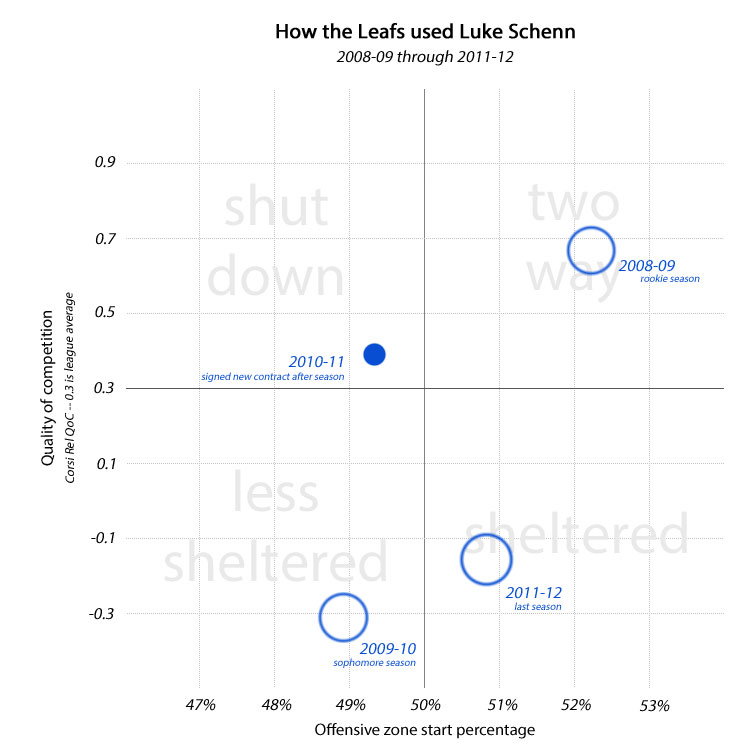 Despite injury this past season, van Riemsdyk showed progress in just about every metric, even if that growth wasn't as visible as his beast-mode performance during the 2011 playoffs. Meanwhile, Schenn's been all over the place during his four NHL seasons, as you can see from the usage chart at left.

Click to enlarge, will open in a new tab.

Schenn was thrown to the fire in his rookie season ... and it didn't really work out. He started in the offensive zone quite often, but he failed to keep play in that end of the ice. Then again, he was playing against very solid competition. We'd have to make the assumption that the Leafs simply asked too much of Schenn in Year 1. In his sophomore season he was tasked with a much easier role -- yes, he started in his own end more often but he was playing against depth, not star players. Still, the results did not work out in his favor.

2010-11 was a much better year for Schenn -- his career year to date. He played tough minutes against solid competition and had success in doing it. It's no surprised that he inked a five-year contract after that season, but unfortunately, he followed it up with his worst season so far. He played easy minutes against weak competition last season and he still struggled with the results. He was a healthy scratch at times. It was not pretty.

The usage chart paints an inconsistent view of Schenn's career so far -- and it's not just the results that are alarming. You can make the argument that he's a good player stuck on a bad team, but if he's a good player, why has he faced far-below average competition in two of his four NHL seasons?

The fact is that he was one of Toronto's worst defensemen last season. There's no way around that.

This doesn't mean much of anything for his future, as Schenn has clearly not hit his ceiling yet. But it does make us wonder exactly what that ceiling may be. And when you compare this with van Riemsdyk, who's clearly trending north, it makes this trade riskier for the Flyers than it is for the Leafs. 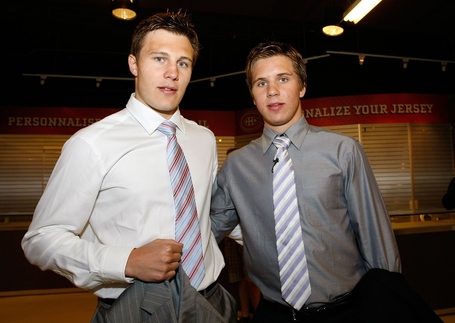 Pro: Luke and Brayden get to play together. The analytically-minded amongst us may not like the idea of this one, but there's something to be said about playing better hockey when you're in a good situation. When you're happy you tend to be more confident, and confidence can truly be everything in hockey. It certainly seems as though Luke was having an unhappy time in Toronto -- being a healthy scratch will do that to a guy -- and now he suddenly finds himself not only on a contending team but with his brother, too.

It's a great situation for Luke to be in here. Happiness doesn't bring a guy skill, but you're not the No. 5 overall pick in the draft without a certainly degree of skill under your helmet, and no matter how desperate your team may be, you don't crack the NHL roster in your rookie season without a solid dose of skill either. A better situation -- a fresh start -- can certainly be good here.

We've also always assumed that this long-rumored deal didn't go down in the past because Holmgren and the Flyers balked at the "straight-up" part of the deal. That was an assumption, but nevertheless. It seems like the Flyers could have picked up another piece in this trade, whether that's a draft pick or whatever.

Pro/Con: We don't know what the future holds. Maybe it's a good thing or maybe it's a bad thing, but we're just not sure what this deal will hold. The Flyers could still do just fine with this deal even if Reemer goes on to be a great power forward in the NHL, just as the Leafs could be happy with the deal even if Schenn goes on to win the Norris someday.

It's bad that the Flyers appear to have gotten the short end of this stick initially. It's good that there's plenty of reason to be optimistic about this trade and Luke Schenn's future in orange and black.