On Wednesday we looked at the season-long scoring chance numbers Todd tirelessly compiled from last year, breaking them down by penalty kill performance.

Just as last time, we will look at three parts of power play performance:

Why 250 minutes and not 200 like last time? If a player averages three minutes of power play time per game for a full 82-game season, he will have amassed 246 minutes of power play time on the year. Since Briere, Jagr, Hartnell, Simmonds and to a lesser extent van Riemsdyk and Voracek, all hovered around 3:00 per game -- as well as it being a nice round number that captures a noticeable difference between the forwards -- it seemed a reasonable figure to adjust to. It is as arbitrary as 200 for penalty killing, but it seems to makes sense.

The table above is sorted by team scoring chances for while each player is on the ice, and it shows quite favorably for Wayne Simmonds and Claude Giroux. The coaching staff seems to have noticed their success as those two led all forwards in power play ice time, while Voracek sits third in both categories. The connection between ice time and scoring chances generated appears to be a strong one, absent Danny Briere.

What is interesting, however, is the individual chance numbers. Wayne Simmonds and Scott Hartnell led the team in both raw power play chances and adjusted for 250 minutes of ice time. Surely the connection between the two is their penchant for standing in front of the net and playing off the puck.

However, both Brayden Schenn and Jaromir Jagr are not far behind them in terms of chances generated per 250 minutes. What is the explanation there? Not sure. Jagr did not shoot much (only Matt Read had fewer shots per 250 minutes than Jagr among the group above) but Schenn shot quite often (he was only behind Hartnell and Simmonds in shots per 250 minutes). Is it that both players were on the half wall, playing without the puck?

Without piling on too much, it is just worth pointing out that Danny Briere's 2011-12 season really was quite forgettable.

Turning to power play chances against is really just to see if anything jumps out. There is not really much that does, though it is interesting to see Hartnell, Giroux and Simmonds have moderately high amounts of scoring chances against.

The differentials show basically the same thing, as the forwards are tightly jumbled in ability to prevent scoring chances against, resulting in similar spreads in differential.

It is only 250 minutes, but the departures of Jagr and van Riemsdyk could be trouble. The Flyers' first unit had a great deal of success last year and can likely just slot Hartnell full time into the fourth forward spot he split with Jagr last year.

It appears as though Brayden Schenn will pick up van Riemsdyk's minutes and Sean Couturier picks up a great deal of Jagr's minutes. The way the Flyers' power play was set up last year, that would result in a second power play unit of Briere, Read, Schenn and Couturier. Looking at the results from last year, that unit will need to improve, even before accounting for the downgrade from Carle to whichever defenseman fills his spot. 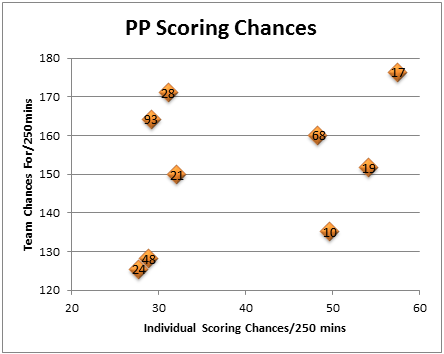 One way of interpreting the graph is to see Giroux and Voracek as playmakers, generating chances for Jagr and Simmonds while Schenn is doing a fantastic job of being the lone individual recording scoring chances while he is on the ice.

For posterity sake, the standard error on scoring chances for per 250:

As you can see, the small sample sizes involved in van Riemsdyk and Schenn's ice time creates more uncertainty surrounding their figures than most, but it is still fairly close to the others. In short, we are looking at roughly a seven to ten percent margin of error here.

As a result, we are once again dealing with small sample sizes. But we see that Timonen and Pronger - in only 50 minutes - were much better at generating scoring chances with the man advantage, while Carle and Meszaros lagged behind.

As a frame of reference, Timonen and Pronger's numbers are roughly equal to Wayne Simmonds' team scoring chances, which led the team. Carle's on-ice scoring chances for, meanwhile, are roughly equal to Brayden Schenn's, which were on the lower end. This, also, makes sense as Timonen was most often on the first power play unit - along with Simmonds - while Carle was most often on the second power play unit - along with Schenn.

Here are the standard errors on defensemen:

We again see small sample size problems appear in regards to Pronger, and to a lesser extent Meszaros, which we mentioned at the beginning of this section. Kimmo Timonen shines through as a power play quarterback, which I'm sure we already knew.

We are able to see some interesting trends that lead us to suspect the first power play unit of Giroux, Simmonds, Voracek and Timonen did a fantastic job together. With Hartnell and Jagr alternating as the fourth forward on the first unit, both players found success on a clearly superior unit.

The second power play unit, however, mostly comprised of Briere, Read and Carle, however, was less successful. Whether it was Hartnell, Schenn, Jagr, or van Riemsdyk rounding out the unit, there was clearly something missing from the group. Perhaps it is as simple as Claude Giroux.

Similar to the penalty kill, the Flyers are going to need to fill some significant holes in their special teams. On the power play, the Flyers should once again have a lethal first power play unit, headed by Claude Giroux. The second power play unit, however, will rely heavily on Danny Briere and a bunch of second year forwards. I'm not optimistic.

On defense, the Flyers only really used Kimmo Timonen and Matt Carle last year. With Carle gone, the job would have simply gone to Andrej Meszaros, who was not much worse than Carle at quarterbacking a power play. With Meszaros out, that task will fall on someone without much -- or at least, recent -- experience playing the point.

It sure will be interesting to watch the second power play unit. Hopefully Briere and Schenn can make it lethal.