How Philadelphia Flyers forwards were deployed in 2011-12

Share All sharing options for: How Philadelphia Flyers forwards were deployed in 2011-12

One of the early steps in hockey analytics was developing quantitative measures for the strength of competition a player faced. You can look at the average +/- or Corsi of all of the opponents a given player faced and get a reasonable estimate of how tough his opponents were.

What makes me nervous about this approach is that players' usage and results are linked; we're judging my opponents by their results, which are impacted by the fact that they get used against players like me.

There are ways of getting around this challenge by putting in various adjustments for zone starts, teammates, and competition, but I wanted something simpler.

Since coaches tend to give the most minutes to their best players, this should be a decent ranking of quality of competition. And since it's not explicitly based on results, it should be largely free of the biases that come from a player's own skill and usage impacting the results of his opponents.

It turns out that this TOI Qualcomp has been calculated before, but it fell by the wayside several years ago as we moved into shot-based metrics. I'm reviving it here and adding a new twist: we can separate out the average TOI of the opposing forwards and the opposing defensemen that a player faced. This goes beyond "how tough were his opponents", to "what type of opponents did he face?"

We can also make plots illustrating a team's situational usage of their forwards. Here's Nashville's, for example: 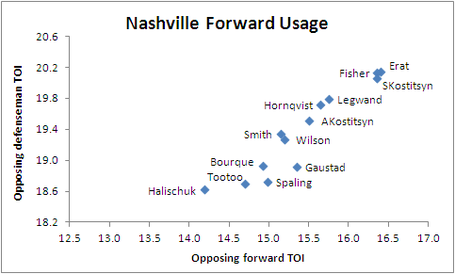 Here's what we see for the Flyers last year: 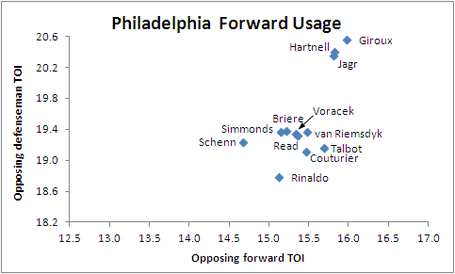 A few things stand out for me here:

Will the Flyers have a strong second line step up next year? Will Schenn blossom, and command more attention from the opponents? Will Voracek thrive as he moves up to face top lines? As you piece together proposed lineups for next season, think about how each might be deployed.

Answers to some FAQs: