Share All sharing options for: Comparing the Flyers and Wild zone entry data 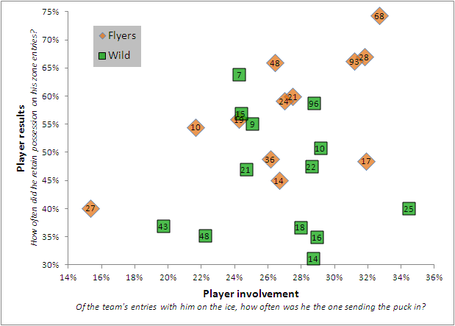 In the 2011 playoffs, we started a project tracking zone entries, looking at how we can break the game down and analyze performance in each zone just by noting each time a team brings the puck into the offensive zone.

With this year's data, we were able to show that performance in the offensive and defensive zone was irreproducible and that shot differential was almost completely determined in the neutral zone. We saw which players were most effective with the puck and how involved they were in setting up the play.

But some of our conclusions had to be tentative, since we only had a single team's data to look at. Today at NHL numbers, we get a comparison with a second team thanks to 50 games of Minnesota Wild data from Hashtag Hockey. That article confirms many of our previous findings:

The number of shots a team gets seems to be driven almost entirely by how effective their players are in the neutral zone -- how often they push the puck into their offensive zone and how often they retain possession as they do so.

In addition, as the plot above suggests, the Flyers were much more effective than the Wild through the neutral zone; the Wild were forced to dump and chase much more often. This may partly be because the Flyers had more skilled puck-handlers, but a striking difference is how much more efficiently the lineups were constructed -- with just one exception (Briere/Simmonds), the Flyers kept the puck on the stick of the player who would do the most with it, while the Wild showed absolutely no correlation between involvement and results.

Read the rest of the article at NHL numbers.