Share All sharing options for: BSH Fantasy Hockey 2012-13: Betting The Lockout Will Pass

The hugely popular Broad Street Hockey Fantasy Hockey League is back for another year. After massive expansion last year that saw a three tiered promotion and relegation system, we believe we have worked out most of the kinks in time to wait for the lockout to end.

Just as last year, we will have three tiers, five leagues, and 100 participants. There will be, at minimum, 22 slots open. To get one of these 22 slots, either put your email address in the comments below or email me at geoff.detweiler@gmail.com. I much prefer the comments of this thread, but either works.

Rules, diagram, and more after the jump.

First, invitations are purely on a first-come, first-serve basis. I suppose any way you can reach me with your email address (e.g. in the comments, on Twitter, emailing me, Facebook, text, telegram, notarized pizza box) will work just fine, but I expect the slots to fill very, very quickly.

Secondly, if you were in one of the top two tiers last year, or finished in the top-10 of Tier 3, you have until Friday at 5 pm to accept the invitation to join that was sent to you last weekend. If you have not received such an invitation, but feel you should have, let me know as soon as possible. Invitations will be sent to those on the wait list Friday evening, and at that point, whoever accepts their invitation first is in, regardless of prior year's results.

There are currently 27 of you who have yet to accept your invitations, so, you know, check your spam folders or those old email addressess you gave to Yahoo! because you didn't want to get their stupid spam.

Thirdly, the drafts are currently scheduled for Sunday, October 7th at 8 pm EST, but each league is free to work out the best time for them. Sunday night drafts tend to work best for everyone, and this is the last Sunday currently allowed by Yahoo to draft. Yes, this is dangerous because of the possibility that your draft picks get hurt while playing in Europe during the lockout. That is just going to have to be a problem everyone faces together, unless Yahoo! allows us to push the drafts back.

Graph time! Here is how the three tiers work, visually: 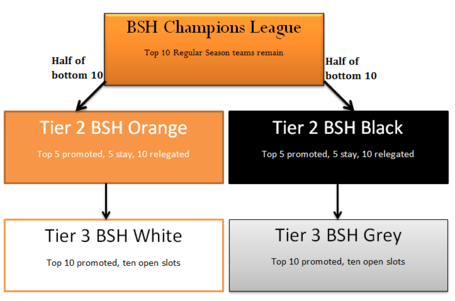 Due to us not clarifying how promotion was determined last year - regular season standings or playoffs? - we had the 20 members of BSH Champions vote on how to handle promotion going forward. Due to the ten team cut offs in Champions and Tier 3 leagues, the new format really only affects how Tier 2 is promoted.

To reward extended success, as well as to promote head-to-head battles, the playoffs will consist of four teams instead of eight. The way Yahoo! structures their leagues, however, means that teams ranked fifth through eighth in the regular season enter a four team "consolation bracket", with the fifth and eighth ranked teams facing each other and the sixth and seventh ranked teams playing each other.

We will utilize this consolation bracket to determine the fifth and final team promoted from Champions. So promotion from Tier 2 will be the top four regular season teams (who enter a playoff for bragging rights among them) plus the winner of a four-team playoff among seeds five through eight. Then, those three teams not winning the consolation bracket, plus teams finishing in ninth and tenth in the regular season, remain in Tier 2.

Across all three Tiers, the top-10 regular season finishers are guaranteed an invitation to return to the same level or better. That should be the minimum target for all.

One of the worst aspects of fantasy hockey is the limited amount of statistics one can use as categories. Add in the size of our leagues and you get limited options that need to be carefully balanced so as to avoid disproportionate importance.

Two years ago, Yahoo!'s inabilty to accurately assign positions to forwards resulted in the faceoffs won category skewing the positional influence to centerman incorretly labeled as wingers. Last year, our switch to counting stats for goalies proved misguided when forcing teams to roster a minimum of two goalies.

In other words, the scoring system has not been, and probably will not be, perfect. But we're always looking for ways to improve it. In that spirit, we had the 20 members of Champions suggest and vote on rule changes. The results of those votes led to the following rules: 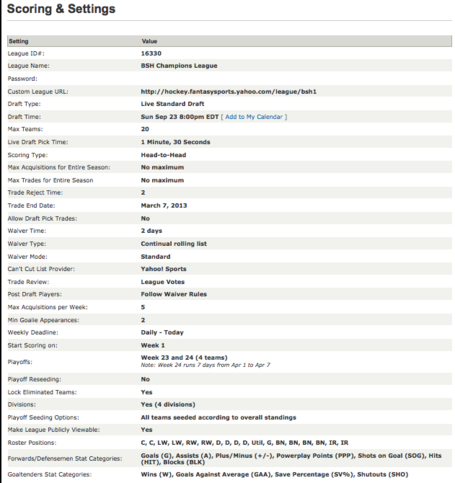 These will be the rules for all leagues, and hopefully these are better than last year.

So, good luck and please bring us hockey soon.