Which Flyers rival do you hate the most?

The Flyers have a lot of hated rivals, but of them all, which one do we hate the most? It's not as easy a question as you'd think.

Share All sharing options for: Which Flyers rival do you hate the most?

We might not have training camp to talk about this week, but hockey still does actually exist. So does our hatred for any number of rival teams, so ... well, why don't we decide which team we, fans of the Philadelphia Flyers, hate the most?

When asked, you probably have an immediate answer: the Pittsburgh Penguins. And it's obviously a totally fair answer. Especially in recent times, it's tough to imagine hating any team more than we hate the Penguins. They're the epitome of how an NHL franchise does things the wrong way, right?

Meanwhile, our team has been competitive year in and year out (except for one down season) since the early 1990s. Our fans have never disappeared en masse and when we needed/wanted a new arena, our ownership essentially paid for the entire thing themselves without government help.

And yet despite doing everything the "right" way, we have nothing to show for it except a few losses in the Finals and some fun playoff runs.

But should we hate the Pens the more than anybody else? After all, they do still live in Pittsburgh at the end of the day, and honestly, the Flyers have a brighter young core than they do despite the elite players on their roster. The Flyers have the edge in the rivalry right now, all the bragging rights, and it's absolutely plausible that it could continue that way for the foreseeable future.

And even beyond that, there was only a couple-year window in there that the Penguins have had the upper hand on the Flyers. For much of our history, the Flyers have been the far better team. Hell, Pittsburgh didn't win a single game at the Spectrum for nearly 15 years -- 42 games in total -- from 1974 to 1989.

Maybe that's makes it even more frustrating. The Flyers have been so utterly dominant over the Penguins -- on the ice and off of it -- for nearly all of the teams' mutual history, yet at the end of the day, they can hold that one extra Stanley Cup over our heads. And they do it every chance they get.

Is that enough to hate the Pittsburgh Penguins more than anybody else? Let's look at the case against several other of our hated rivals.

The Atlantic Division was established in 1993. Since, the Flyers have won six division titles. The Devils have won nine of them. That's nearly every title in Atlantic Division history right there. These two teams have battled for divisional supremacy more than any other in the last 20 years, and they've faced each other in the playoffs more than anybody else in the division as well. The Devils have had a bit more success on the ice obviously, but when it comes to head-to-head competition in recent memory, no team has built up the hate with us more than New Jersey.

Then there's the whole local thing. Yeah, Pittsburgh is obviously pretty local too, but there's a pretty clear line of demarcation there. Eastern Pa. and Western Pa. are not close, be it geographically or culturally. But the Devils play just 87 miles away from Philadelphia, and even though they try like hell to claim the entire state of New Jersey as their own, the Flyers have a damn strong foothold in South Jersey. Hell, the Flyers practice in New Jersey.

That still means that Devils fans are inter-mingled with Flyers fans probably more than any other fan base (especially if you live to the north and east of Philadelphia), and that leads to more personal animosity than any other rivalry we have. What's the best/worst part of a rivalry? Rubbing wins in your friends faces (and dreading it when the shoe is on the other foot). It's possible that this is never more true than it is with the Devils.

This is a weird one for me. Yeah, the B's were probably the Flyers first truly hated rival. Yeah, in recent years the rivalry has been rekindled -- from Randy Jones' hit on Patrice Bergeron a few years back to the Bruins' 2011 Stanley Cup win (in which they swept the Flyers en route) and obviously, the Flyers' comeback from an 0-3 hole vs. Boston in 2010.

And I truly think that, when judging a group of players solely on their attitudes and the way they play hockey, there's no team in the NHL right now that one can hate more than these Boston Bruins. From Brad Marchand to Brad Marchand's nose, there's just no team that epitomizes the word d-bag like the Bruins. (Fitting, I suppose, since it is Boston we're talking about here.) Even Tim Thomas, the one formerly-likable Bruin, had to go all crazy on us.

But at the end of the day, I just can't hate the Bruins like I hate some of our other rivals. Even after they won the Cup two years ago, I still couldn't find myself hating them all that much. I think a big part of that is the accomplishment of the 2010 Flyers. A team wins the Stanley Cup every single year, but how often does a team return from an 0-3 deficit? I'm not trying to say I'd rather have what the Flyers did in 2010 (while losing the Cup) over a Stanley Cup ultimately, but when it comes to things we're going to remember and cherish in 20 or 30 years, what the Flyers did in 2010 is much more meaningful to us than the Bruins getting their so-called redemption a year later.

It'd all probably be different if the Bruins were in the Atlantic Division. They aren't, and that's probably a shame, but it's tough to say they're our most-hated rival. 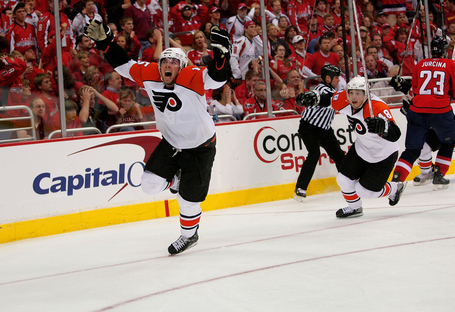 If there's one team that has the ability to compete with our hatred for the Penguins at present, it's likely the New York Rangers. There's actually something about the current crop of Rangers players that's a bit likable -- probably since they ditched Sean Avery -- but the second you put them in those blue, red and white sweaters, it's tough to do anything but hate them.

And then you hear the goal song.

And then you hear their fans. (NSFW)

The Rangers just might have the entire package. They've played some really meaningful games against the Flyers in very recent memory -- maybe not the playoffs, but Game 82 was a pretty damn big game back in 2010 -- and unlike the rivalry with Pittsburgh, the Rangers hate has always been there. Since the beginning.

From the Flyers' utter dominance of the big, bad Original Six team from New York through much of the 1970s to five playoff meetings in the 1980s to fighting over the right to acquire Eric Lindros from Quebec and a giant Flyers jersey on Billy Penn (courtesy, City of New York) in the 1990s, the hate-filled history we have with the Rangers head-to-head is unmatched by any other team in the NHL.

And just like the Devils, the proximity means we have to deal with these people every single day. And Lord knows there's nothing worse in this world than an obnoxious New York sports fan.

So, when it comes down to it, it's probably a two-team race. There's plenty to hate about the Pittsburgh Penguins, and for my money, there's no better current rivalry in the NHL than Flyers vs. Penguins. It gets you excited just thinking about it. But is the recent fun of the Battle of Pennsylvania enough to top the long, storied history of hate we have with the New York Rangers?