Share All sharing options for: An interview with Philadelphia Flyers trainer Jim McCrossin

Jeff Angus is the managing editor of DobberHockey and a contributor to various other hockey websites. He has worked in the fitness industry, and over the next few months he is going to be profiling the strength and conditioning departments of all 30 NHL clubs. We're happy to share his piece on Flyers' trainer Jim McCrossin.

Jim McCrossin has been with the Philadelphia Flyers organization for over a decade, and a member of the organization for almost two. He's the team's Athletic Trainer and Strength and Conditioning Coach.

McCrossin has seen his fair share of injuries during his time with the Flyers. He has worked extensively with players who have suffered concussions, from Eric Lindros, to Simon Gagne, to Claude Giroux, to Sean Couturier.

I got the chance to speak to him this week.

Angus: What have been the biggest changes in hockey training since you have been working with the Flyers?

McCrossin: "The nature of the game. The speed of the game has increased considerably. The players are better informed on all aspects of conditioning and nutrition."

How does your work change with a lockout/work stoppage?

McCrossin: "I will be spending time with our AHL teams as well as rehabbing our injured players."

Injured players have full access to the team facilities and they receive their salary during the lockout, which is why McCrossin is allowed to interact and work with them. He has no contact with the healthy Flyers players, though.

What is your level of involvement with players during a typical offseason? How much influence does the team have on their training program compared to their own coaches/trainers?

McCrossin: "You would like to believe that you have a great influence over the way your athlete performs their offseason conditioning, but in many cases this is left up to the player's personal trainer."

McCrossin spoke with the Flyers' official website this summer and provided more details on this issue.

"I would say throughout a week I talk to our players at least once or twice. I touch base with them just to see how they're feeling or if there's anything else we can be doing for them."

As much as you would want them to follow a program, they don't need to follow your program. A lot of the guys go back [home] and have their own personal trainers and I stay in touch with them as well. Many of them have become very good friends of mine because I respect them and they are very, very good."

A good example of this is Claude Giroux, who returns home to Ottawa each summer to work with his trainer Tony Greco.

What is your athletic background? Has that helped you establish a relationship with the players you train?

McCrossin: "I believe playing the sport has helped me to have a better relationship with our players."

What level of nutritional guidance do you offer the players? How do you make sure they are eating properly?

McCrossin: "Education, we hope that the words and information from our nutritionist and medical staff sinks in [with the players]."

"Right now we're in our building phase. Then we go to what we call our complex training phase, which involves heavy lifting and plyometrics for speed and agility through around mid-August. After that we're back down to our maintenance phase because you don't want to burn out before [training] camp.

"Then we get into more on-ice cardio and more functional drills out on the ice. Once camp begins it's a whole new ball of wax."

Proper progressions are especially important for hockey players as they have such a short summer. Improving on a variety of skills is possible, but proper exercise programming is a key.

"Once the exhibition season is over we settle down and we get into our in-season conditioning program, which is completely different from the off-season because you're not doing heavy lifting or plyometrics because everything is dictated by your game schedule."

In your time with the Flyers, who have been some of the fittest players you have worked with?

McCrossin: "Rod Brindamour, Mark Recchi, and Braydon Coburn. There have been many."

Brind'Amour's dedication to fitness is well-known. Mark Recchi was able to play hockey at a high level well into his 40's because he took such good care of his body. Braydon Coburn has become a rock on the Flyers back end, and is capable of logging heavy minutes thanks to his work ethic in the gym and off the ice.

McCrossin also works closely with the US Army. In this video, he describes what he does behind the scenes, and he brings in a physical therapist from the Army to see how the Flyers training staff operates.

He organizes the annual Trial on the Isle a mini triathlon (bike, run, kayak) that raises money for Flyers Charities, as well as the American Legion Post 331 in Stone Harbor. McCrossin, a Stone Harbor native, also assists in the packing and shipment of care packages to overseas soldiers. This year, the event consisted of the Flyers prospects undergoing a day of military-style training.

"Kevin Coyle, who's the commander of the post, makes sure (the money) gets to a family in need. A loved one has been lost in Afghanistan or Iraq and the family is without an income. There are many families in need and we're just doing our part to support our veterans."

We got a sneak peak at how demanding McCrossin's job is during the HBO Road to the Winter Classic series. In a span of a few weeks, McCrossin and the Flyers training staff were faced with a Giroux concussion, a Couturier concussion, and a freak hand injury to Wayne Simmonds. 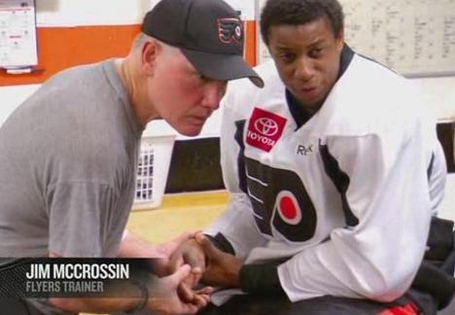 During a Flyers practice, Simmonds took a shot off the finger. McCrossin was quick to act.

And as McCrossin alluded to earlier, communication is key. Not only with players, but with the coaching staff, too. He was the messenger in between head coach Peter Laviolette and Giroux's concussion doctors. 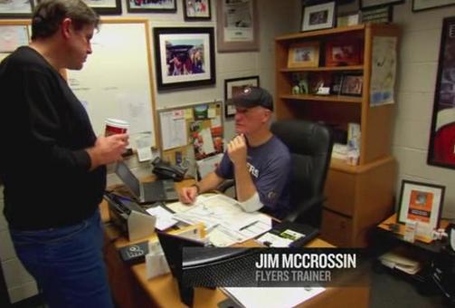 McCrossin has been a beloved member of the Flyers organization for a long time, and it is easy to see why. He works hard to ensure the Flyers are fit and healthy. He contributes his time and efforts to meaningful charities and events as much as possible. And even in a lockout, his work never stops.