Despite an 113-day-long work stoppage, Flyers ticket prices are still very expensive. That's just the way it is in this town, and we should get used to it.

Newsflash: Philadelphia Flyers tickets are super expensive and at times can be really, really hard to come by. This isn't new to a shortened season, but after a 113-day-long lockout, it can certainly rub us the wrong way.

Especially since it looks like, at some point in the last calendar year, ticket prices have been raised. There's been a ton of confusion about this on the Internet today, the day individual tickets went on sale and quickly sold out (or damn-near sold out) through the ComcastTIX website.

We had a conversation with Flyers' Senior VP Shawn Tilger about this last year. In essence, this number above includes partial season ticket plans, but when you look at the entire season, those partial plans and any full season-ticket packages equal 17,979 "full-season equivalents." So, there are 17,979 tickets already sold per game before the general public gets a true crack at things.

And as far as we understand it, that's why individual tickets are so damned expensive. It's supply and demand.

Here's the breakdown on face value for tickets sold on an individual, single-game basis this year:

Individual seats are priced anywhere between $83 for the last row of the arena to $226 for the Cadillac Grille. It's really expensive and it prices out nearly every normal, working-class family in the Philadelphia area.

But the Flyers will tell you they're only selling a small number of tickets at these prices, and that the majority of the arena is sold much less than these prices. Here's a look at season ticket pricing this year, first the lower level prices and then the mezzanine prices: 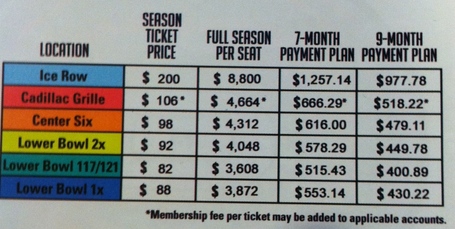 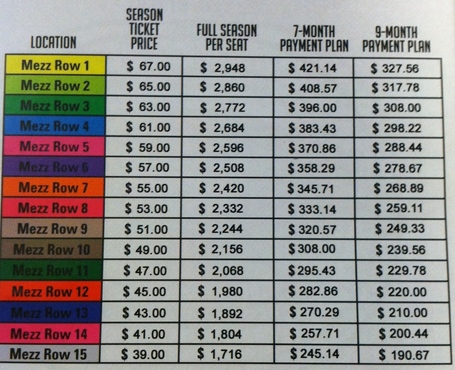 We can't find data on what single-game prices were a year ago, unfortunately. The Flyers say prices went up in slightly in January of last season. We do have the season ticket prices from 2011-12 though, and we can confirm that from last season to this season, prices went up anywhere from $2 per seat to $7 per seat, depending on location.

So, overall this year, season ticket prices range from $39 per ticket to $193 per ticket, while individual, single-game ticket prices range from $83 to $226. The Flyers say they've sold 17,979 per game at the season-ticket pricing this season. That means they'll sell 1,558 at the single-game prices, plus any standing room overflow inventory they might have. Most of those sold out today, although you can still find some tickets through the Flyers.

It's all very expensive. You can find tickets on the secondary market at cheaper prices depending on the game, but it's still very expensive to go to a Flyers game. Especially for a family. That's the price we pay, literally, as fans of a hockey team that's a) very popular and b) a perennial contender.

And as long as the Wells Fargo Center is sold out each and every night, being a Flyers fan won't be any cheaper. Lockout or no lockout.