Mike Knuble to the Flyers? Social media clues point to the possibility

Is Mike Knuble in for a return to the Flyers? His family members on Facebook say so.

Share All sharing options for: Mike Knuble to the Flyers? Social media clues point to the possibility

Mike Knuble is an unrestricted free agent. He was invited to Detroit Red Wings training camp, but the 40-year-old was a longshot to make the team all along and ultimately did not earn himself a contract. He signed a professional tryout contract with the Red Wings and has been playing for their AHL affiliate, the Grand Rapids Griffins, over the last week.

But Knuble, as we know, has a history with the Philadelphia Flyers. And if you haven't heard, the Flyers are in pretty rough injury shape right now. They cleared room for a contract spot today. Could that spot go to Knuble?

Following some clues on Facebook, it seems like Knuble could be on his way back to Philly. Both his brother, Steve, and his sister-in-law, Jaci, posted statuses that say he's signed with the Flyers. 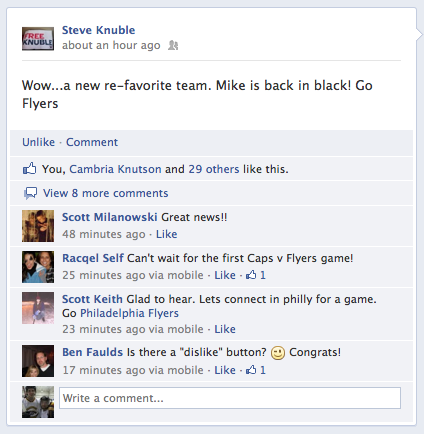 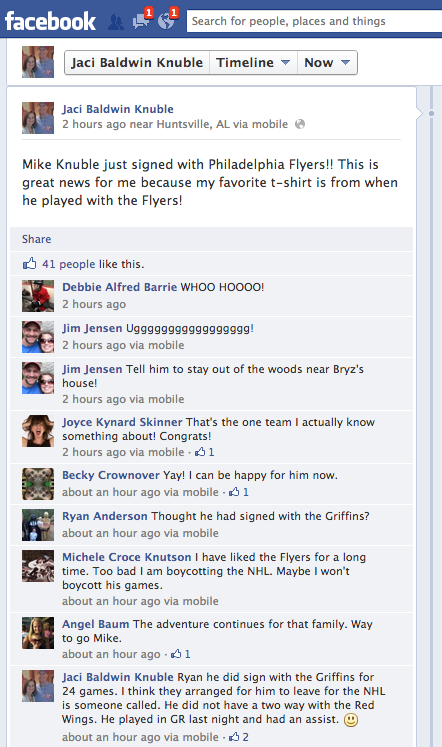 These two are definitely Mike's family. No chance of a Facebook hoax here. The only real possibility I could see is that they got a little excited and jumped the gun before a deal's complete, but there's definitely smoke here. I'd guess the fire is just around the corner.

We reached out to Mike's agent, Kurt Overhardt, and to the two family members above. We'd ask Paul Holmgren but we don't have his phone number, so, you know. Feel free to confirm/deny for us in the comments, Paul.