NHL lockout ends: Let's refresh ourselves on the Philadelphia Flyers

The lockout is over, and the Philadelphia Flyers are a thing again. Let's go back and remember last offseason, with an eye towards the new season.

Share All sharing options for: NHL lockout ends: Let's refresh ourselves on the Philadelphia Flyers

Oh, right, remember the Flyers? They're a professional hockey team, and you like them!

Now that the lockout is finally over, there's hockey to be played. It's been a while since we've talked about actual Philadelphia Flyers hockey around these parts, so let's try as quickly as possible to get caught up on the team we have, the holes that need filling and exactly how the orange and black shape up against the rest of the league.

June 23: Immediately after the NHL Draft -- like, literally a few hours after it ended -- James van Riemsdyk was traded to the Toronto Maple Leafs for Luke Schenn. Straight up. We're still not so sure about this deal. Here's our analysis of the trade, which hasn't changed since June because hockey hasn't been played since.

June 30: The free agency season began with a relatively minor move (although we probably shouldn't tell Ben that) when the Flyers bought out defenseman Oskars Bartulis. He was essentially just extra weight and an extra contract, and as much as we loved the Latvian around this corner of the Internet, Oskars was utterly replacable.

July 1: The day was full of anticipation. Zach Parise? Ryan Suter? Both were reportedly offered contracts by the Flyers, but as we know now, that never came to fruition. As it turned out, the Flyers only made one move on July 1, signing Michael Leighton to a one-year, $900,000 deal to backup Ilya Bryzgalov.

July 3: A few days later, the Flyers signed a few minor-league deals. Danny Syvret and Cullen Eddy signed deals with the Flyers, but they're low enough on the depth chart that they won't really impact the Flyers. Mike Testwuide, a restricted free agent, also signed.

Jaromir Jagr got paid by the Stars on July 3 as well. It would've been nice to have Jags back, but at $4.5 million for the year? No thanks. Have fun in Dallas, man.

July 4: The shit hit the fan on Independence Day, as two of the best American players in the NHL signed with the Minnesota Wild. The Flyers were after both Parise and Suter, but all in all, it's a good thing the Flyers didn't give up all that money for those guys. The Wild ponied up and got their men, and they went west where we don't have to worry.

Always up for a challenge, though, the Flyers only waited about five hours before making their big splash. Bruno Gervais, ladies and gentlemen! Another sixth or seventh defenseman. Just what we needed.

Gervais was not a replacement for any of the remaining holes on the blueline, and that's a shame, because another five hours later, Matt Carle left Philly and signed with the Tampa Bay Lightning. He did it at market value, and by departing, he left a massive hole on defense that's yet to be filled. As we wrote at the time:

It will not be easy replacing the team's ice time leader from a year ago, but the team cannot possibly be finished signing free agents. Even if Bruno Gervais signs, as was reported, he is not going to be the Flyers biggest free agent acquisition.

July 5: Ruslan Fedotenko! A nice little signing, sure. Good price, a solid defensive presence. A valuable player on the third line. Not going to fix the hole on defense, though.

The offseason got pretty damned boring after this. Not that it was exciting in the first five days, but at least there were things to talk about. Rick Nash was a thing (again) for a minute on July 11, but other than that, the only action was the signings of restricted free agents Tom Sestito and Ben Holmstrom. Riveting stuff. 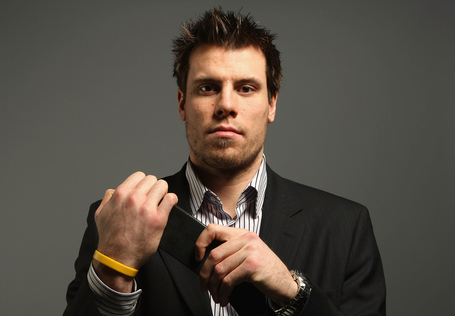 It's late at night and really tough to digest this in full, but the initial reaction is that: a) Shea Weber is an amazing defenseman and having him on the team fills any hole on defense and would make this club immediate Cup contenders in 2012-13, b) losing four firsts would hurt but the Flyers are already pretty damn young and ready for a long run with this group and c) holy shit, is it fun to be a fan of this team or what?

We all know how it ended -- the Flyers didn't get their man. Nashville matched the offer sheet and now they'll have him for the next 14 years, so good for them. But damn, did Homer ever try to solve his problems on the blue line in the ballsiest way ever. It's a whole lot of fun going back in the archives and remembering this whole thing:

* Report says Shea Weber could earn $26 million in one year, but how?

* Poll: Do you like the Flyers offer sheet signing of Shea Weber?

* Should we take the Shea Weber offer sheet at face value?

* How long will Shea Weber play?

* Drop the mic: The Flyers only official words on the Shea Weber offer sheet

July 19 was the second-biggest day in BSH history, and frankly, when it comes to offseason bombshells, one of the biggest days in Philadelphia Flyers history -- perhaps only topped by June 23, 2011.

So we did. The Flyers made some more moves to finish out the offseason, but none of them came on defense.

* Jake Voracek, who had been an RFA, signed a four-year, $17 million deal.

But despite the moves, the Flyers faced still faced huge hole on D. Weber was the coup de grace and it didn't pan out as we planned, and the other available options were pretty poor. Shane Doan and Bobby Ryan were part of the discussion, and Doan even visited Philly in late July, but solutions on defense were few and far between.

More offer sheets? Unlikely, although the Flyers did kick the tires on P.K. Subban. Remaining free agents? A slim pool.

All things considered, it really does look like some sort of trade is the Flyers' best option here. That means giving up something of value, but thankfully the Flyers do have plenty of value scattered around their roster. We all know that Paul Holmgren is going to have to spend to get what he wants, though, and that's not going to be all that fun.

That, or I guess we can hope Luke Schenn turns into a No. 1 defenseman over night.

That's basically where the Flyers stand heading into the 2012-13 season. Perhaps the abbreviated year will help, especially when it comes to the potential wearing down of guys like Braydon Coburn and Kimmo Timonen, who will have to play huge minutes for this team to be successful.

There's still a hole on defense, though, and it's the biggest concern the Flyers have heading into the new season. Will Paul Holmgren try to answer it before the season begins?