The Flyers left Chris Higgins wide open in front of the net last night and it led to the Canucks game-tying goal in the third period. Let's take a closer look.

Share All sharing options for: Flyers vs. Canucks: A video breakdown of Chris Higgins game-tying goal

Today at practice, the Flyers focused a lot on one play in particular: the one that Vancouver's Chris Higgins scored on in the third period. It tied the game and got the Canucks on track to steal the third period and two points from the Flyers, so it makes sense that Craig Berube wants to fix it.

Let's take a closer look for ourselves and see what went wrong.

You can see that Henrik Sedin wound up with the puck all by himself, with all the time in the world, and Higgins went basically untouched in front despite three Flyers standing right around him. How'd that happen?

Nicklas Grossmann was riding Higgins, who carried the puck from the blueline, all the way around behind the net and into the far corner. It was when Higgins put on the breaks and turned that it all got screwed up. 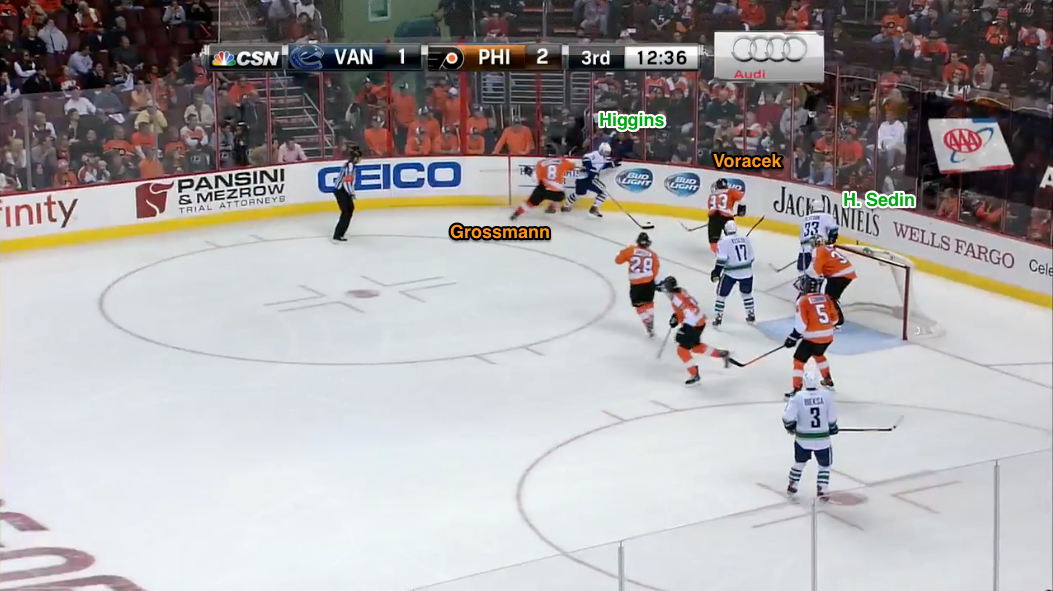 Grossmann is on Higgins like glue, and Voracek is guarding against the pass behind the net to Henrik Sedin. Giroux is right on top of Ryan Kesler in front, so Higgins really doesn't have many options here. It all looks good until Voracek makes the wrong decision to slide to the corner and help Grossmann.

In the GIF here, you can see Voracek get pulled out of position to the corner, opening up the option for Higgins to dish it off to Sedin behind the net. That's mistake No. 1. The second error the Flyers make here is a simple communication breakdown.

Grossmann thinks he and Voracek have swapped responsibilities, so he leaves Higgins in the corner and makes a beeline for the crease. Voracek, meanwhile, floats off Higgins in the corner and heads out into no-mans land. Voracek is responsible for the unseen Canuck that's at the far point (it's Jason Garrison, by the way), but he's the only one who can see that Higgins is wide open and probably bears some responsibility for not letting anybody know that HEY THERE'S A GUY THERE. 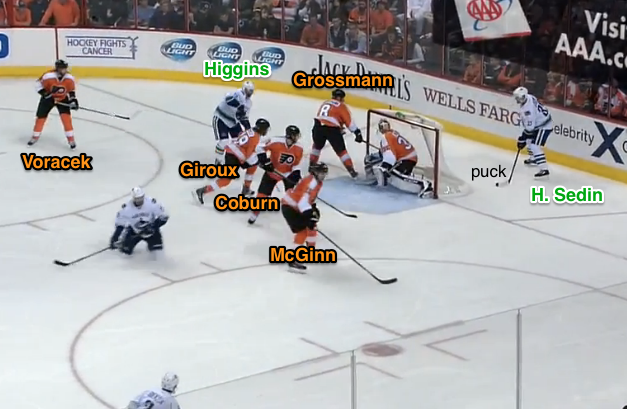 Giroux will collapse to the near post while Grossmann remains in his spot along the far post. Both are the right move. Giroux is protecting that near post -- Sedin had a clear path and could've wrapped the puck around the post -- and Grossmann as you'll notice is protecting the same thing from happening on the other side.

This is what leaves Higgins wide open, though, and nobody does anything to rectify the situation.

Two options here: Voracek could leave the unseen man at the point and jump on Higgins, but coming from his back side, there's probably not too much Voracek would be able to do at this stage. Coburn is right there also, though, and you'll notice that he even glances in Higgins' direction and then just remains stationary. 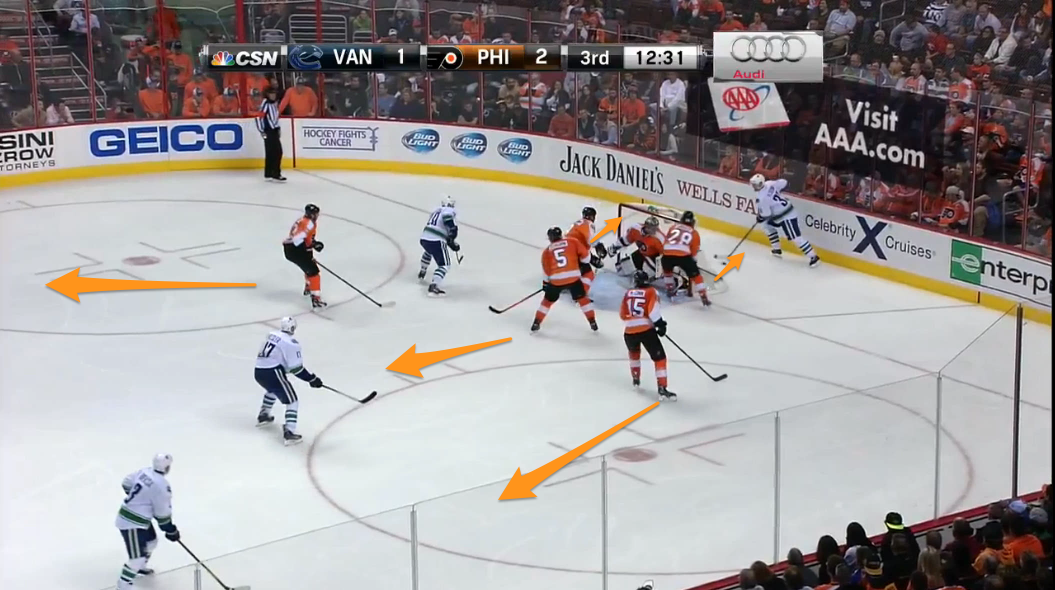 Here's the thing about this circumstance: With Sedin/the puck drawing two men behind the net, the Flyers are going to have to leave somebody open. So they must play the percentages: which option is best? Should Voracek leave his man, who's all the way back at the point, or should Coburn stop guarding the centering option to Kesler?

On one hand, if Voracek hops on Higgins, Sedin could toss the puck up around the boards and back to the point, opening up a big blast with a lot of traffic in front of Steve Mason. On the other hand, a shot allowed from the point is obviously a much lower-percentage shot than a point blank rip from Higgins in the slot.

If Coburn were to jump on Higgins, he could get body position in front of him, instead of Voracek, who could only hope to tie up the stick from the back side. That leaves the Kesler option open, as No. 17 would likely slide into the slot wide open -- just like Higgins -- but McGinn is right there to take over for him. McGinn leaving his position would open up Bieksa at the near point, but again, that's a point blast, a lower-percentage chance than a guy with the puck in the slot.

Given that, here's the coverage I think the Flyers should have employed on this play: 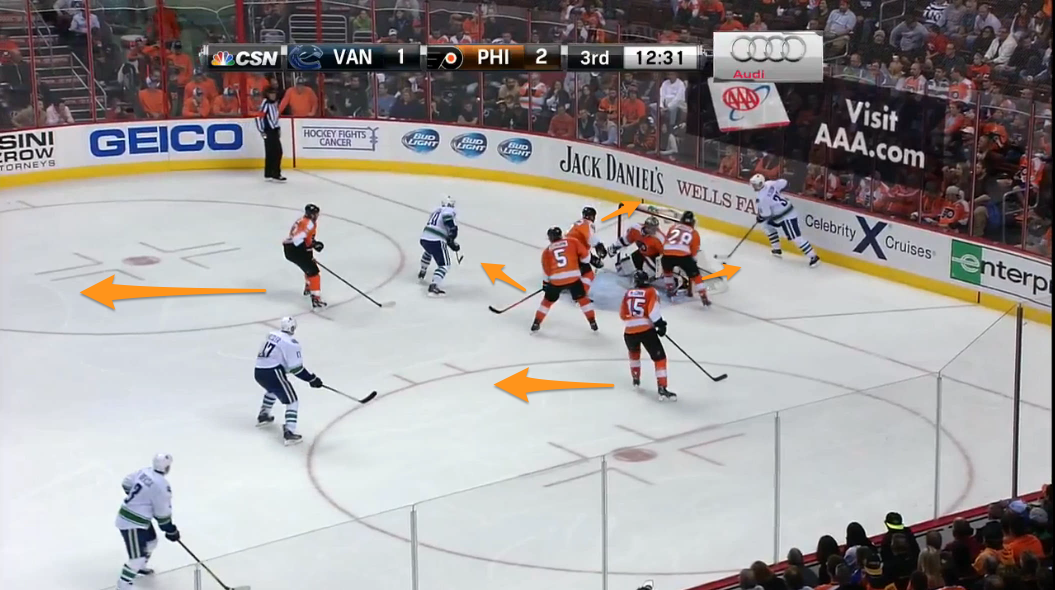 Voracek covers Garrison at the far point, McGinn covers a potential feed to Kesler in the slot, Giroux and Grossmann pressure the puck-carrier Sedin behind the net, closing off his options, while Coburn covers the immediate threat in Higgins. Alternatively, Grossmann could've backed off and held Higgins, but that would've opened up a wrap-around attempt from Sedin on that post. I don't think two guys focusing on Sedin was necessarily the problem here.

That would leave Bieksa open at the near point, which is probably the least dangerous option for the Flyers here. Sedin's already leaning to his right side and would have to pivot the other way to get the puck around to Bieksa, and the Flyers would have time to turn and defend against any shot that would come from that move.

Let's remember why this all happened in the first place, though: Grossmann and Voracek got all discombobulated on their defensive responsibilities from the start, and from there it was all a big mess.