Flyers vs. Ducks recap: Let's learn how to effectively blow a 2-goal lead

The Flyers blew a two-goal lead in spectacular fashion, barely putting up a fight in the final 23 minutes of the game.

Share All sharing options for: Flyers vs. Ducks recap: Let's learn how to effectively blow a 2-goal lead

It's one thing to sit back with a lead. Every team in the NHL does it, especially when it's a multiple goal lead. It's a completely different thing to do what the Flyers did tonight.

This graph, via Extra Skater, shows the Flyers third period as clearly as possible. The blue line tracks the number of Flyers shot attempts excluding those blocked by Anaheim (or, Fenwick) as the game progresses, while the red line tracks the Ducks. We've added shading to clearly illustrate each period. 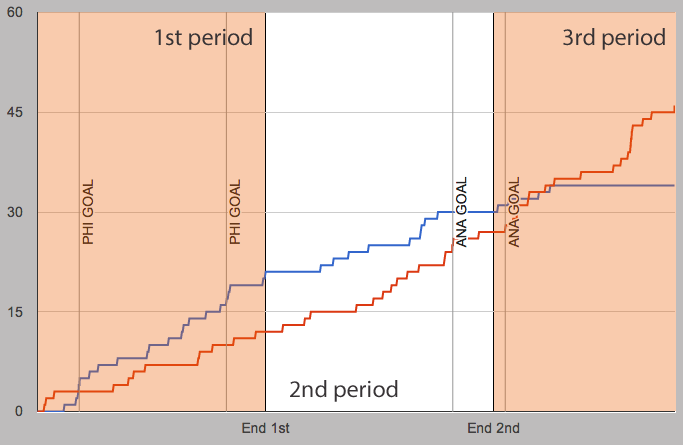 The third period was particularly ugly, as you can tell, but there's a clear step back in the Flyers attack from the time Anaheim scores their first goal late in the second period until the end of the game. When Andrew Cogliano scored that goal, the Flyers had 30 attempts at the net. In the remaining 23 minutes of the game, they took four total attempts.

Give credit to Anaheim, sure. But the Flyers shot themselves in the foot tonight. This loss is their own fault.

Capitals in town on Friday. Hopefully Craig Berube changes his mind on this and runs this team into the ground during practice on Wednesday.

1. Can the Flyers keep the goals coming? For 20 minutes, sure.

2. How does Vincent Lecavalier follow up his hat trick? Good, for 20 minutes.

3. How does Andrej Meszaros perform? Fine, for 20 minutes.

4. Keeping Getzlaf and Perry off the board? Getzlaf had an assist.

Tonight was like a pregnancy scare. The first period was great to see, after that it's the same old bullshit.