Looking at the Flyers' recent improvements in puck possession

One big part of the Flyers recent success? Unlike in the first month of the season, they've just had the puck more than their opponents have.

Share All sharing options for: Looking at the Flyers' recent improvements in puck possession

You may have heard that things have been going a bit better for the Flyers in the past couple of weeks. They're on a seven-game point streak, with six wins and just a single shootout loss in that time. The run that the orange and black are currently on brought them from 28th in the league to firmly back in the playoff chase.

There are a lot of reasons for that turnaround. Good goaltending: Steve Mason and Ray Emery have been outstanding the last couple of weeks. Good coaching: Craig Berube's had a lot of last change lately with the Flyers playing so many home games, and as such he's received a lot of credit for matching lines well. Regression: a team with this many good offensive players wasn't going to be terrible forever.

But there's another thing that you won't hear a lot about that's as important of all: the Flyers, as a possession team, have been much, much better the last couple of weeks.

To quickly recap, if you're new to these numbers or need a refresher: possession in hockey is basically defined by the number of shot attempts a team gets towards the other team's net at even strength. Teams that have higher possession numbers are ones that typically get more shot attempts to the net, and teams with higher possession numbers are generally, over the long-run, better at things like winning games and making the playoffs.

This works at both a team level and an individual level. Guys who get a majority of the shot attempts while they're on the ice go a long way towards helping their team win games (and, as it's been discussed here before, guys who do this regularly can sometimes get undervalued). Though there are often adjustments to be made to the single number, a player's Corsi-for percentage (the percentage of goals, shots on goal, missed shots and shots blocked on ice that are taken by his team) is typically the way we evaluate his possession ability.

The Flyers' lineup in their current seven-game run has been the exact same in every game, with the lone exception of Michael Raffl playing in the first game of it and Steve Downie then taking his place for the other six. Here's how each player in the lineup has seen his Corsi-for percentage trend in the last two weeks, compared to the four or five weeks before them. (See bottom of article for further postscript.)

(Note: Downie, having only played about one half of one game with the Flyers prior to 11/9, was not included on the chart.)

And for further visualization purposes, here's that in nifty bar graph form: 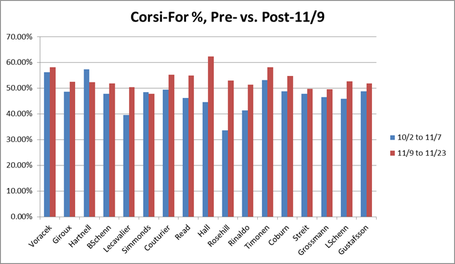 The takeaway here is obvious: of the 17 players who have been with the team all year and have been playing during the team's hot streak of late, 15 of them have seen their possession numbers improve in the last two weeks, and many of them significantly so.

A lot has gone right for the Flyers lately. At some point, they'll lose some games and cool down a bit. They aren't going to get .930-plus goaltending forever -- even if Steve Mason has genuinely improved as a goalie since his arrival here (something that seems more likely with each passing start), that's too much to expect from him (or any goalie) in the long run.

But some of the underlying numbers of late are definitely encouraging, and if the Flyers are getting and keeping the puck more than their opponents are, that's going to go a long way towards making sure that the struggles we saw at the beginning of the season were temporary, and solidifying this team as a potential playoff squad.