Dick Sarrazin's third period goal pushed the Flyers to a 2-2 tie with the Maple Leafs on Saturday night. They hold their lead over Minnesota for the final playoff spot in the West Division. This happened in 1969.

TORONTO (Mar. 8, 1969) -- It was a physical game from the start tonight here, as the Flyers traveled to Maple Leaf Gardens for a cross-division matchup against the Maple Leafs. Philadelphia evened a 2-1 game with less than 10 minutes to go and the teams ultimately finished with a 2-2 tie and a single point in the standings.

Just 30 seconds into the contest, Leafs defenseman Tim Horton and Flyers blueliner John Miszyk got tangled up in the corner and went at it. Linesman Bob Myers had to break the two up, and each were sent off for roughing. 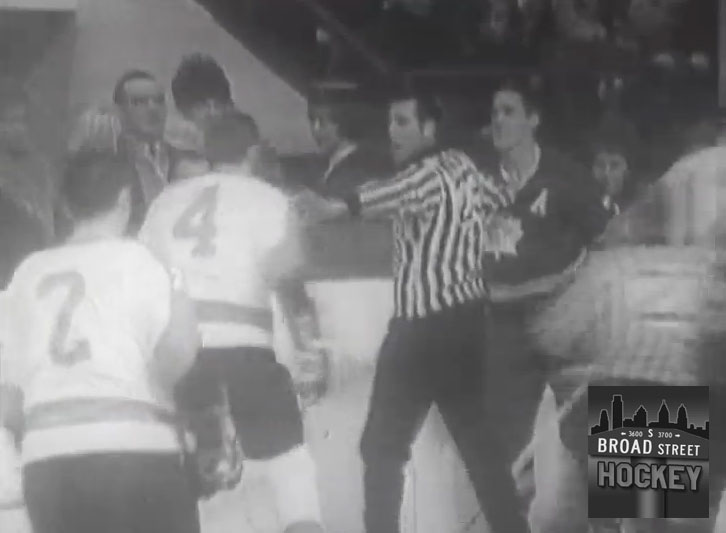 That would set the tone for this hotly contested matchup between the two clubs, and it was defenseman Dick Cherry -- whose brother Don is on the tail end of his career with the WHL's Vancouver Canucks -- scoring just his sixth goal of the season on a pretty feed up the middle from former Leaf Bill Sutherland. Cherry found a whole between the defense and cruised on it for a shot on Leafs goalie Bruce Gamble that just snuck inside the post.

Jim Johnson took an ill-advised holding penalty at the 10:25 mark of the first, giving Toronto their first power play of the game. Their leading scorer Norm Ullman took advantage for his 31st tally of the year, ripping one past Bernie Parent to even the score at 1-1.

The game was up-and-down throughout, with the physical play evident on both sides. Maybe that's because it was on Hockey Night in Canada north of the border or it was because of the playoff implications, but it certainly made for an exciting evening for those in attendance and those lucky enough to have the game on television.

Both goaltenders played phenomenal games. Parent made 33 saves in total for the Flyers, several big ones in the third period during a Leafs power play. Gamble finished the game with 27 saves on 29 Philadelphia shots.

At 10:37 of the third, just after Parent and the Flyers killed off a Don Blackburn tripping penalty, Dick Sarrazin beat a falling Leafs defender at the blue line, skirted through the neutral zone, pushed off a defender and placed a shot beautifully over the shoulder of Gamble to tie the score.

That'd be all the scoring, and the game ended in a 60-minute deadlock.

The Flyers entered the contest just two points ahead of the North Stars for the West Division's final playoff spot with a 14-33-18 record overall but gained an extra point on Minnesota with the tie tonight. Toronto entered the night three points back of Detroit for the final playoff spot in the East Division, with a 29-22-13 record overall. They lost ground in the playoff race with Detroit's 7-4 beating tonight of the Boston Bruins.

The playoff chase is on with just 10 games left in the regular season now. Toronto, champions just two seasons ago, disappointed last season in missing the inaugural East Division playoffs. The Flyers of course finished atop the West Division in their first season a year ago and are looking to get back to the Stanley Cup postseason in their second year.

Philadelphia is back in action tomorrow night at the Spectrum where they'll host the Oakland Seals and rookie phenom Norm Ferguson, a favorite for the Calder Trophy this year. Oakland sits in second place in the West, 11 points ahead of the Flyers with a record of 24-32-10.

The Leafs are in a hitting mood tonight. They played Montreal the other night and were not according to King Clancy. He said a fella could carry around a dozen eggs and not risk breaking any.

An NHL GameCenter Live subscription features the NHL Vault, which includes 85 classic Flyers games available to watch, including this one. The NHL sponsored this post. Thanks to Flyers History and Hockey Reference, who didn't sponsor this post but are awesomely helpful anyway.