This wasn't as bad a game as some might have you believe. The Flyers played well early but tailed off towards the end of the game. Lets jump right in and look how each line faired.

The Flyers actually came out with a strong effort in the first two periods tonight. They won the shot battle early and went +5 in scoring chances at even strength in the first period. The 2nd period was basically a defensive dead lock with neither team giving much ground. This game was lost in the 3rd period as the Flyers registered 0 chances at even strength while ceding 5 to the hurricanes, including the tying goal. If the Flyers could have held on to win this one, I think we'd have a much different outlook on this game. Unfortunately, the Canes really took hold this game in the last 10 minutes or so. We saw a very good game for the Schenn line but it was again a one-line show for the Flyers offensively. Giroux's line looked okay at times but didn't do enough to limit chances against. Solid effort from the defense, particularly Kimmo Timonen. 3rd periods are a major concern for this club right now. They can't seem to sustain the offensive effort for 60 minutes and that leads to defensive breakdowns late in games. Alas, this will go down as another winnable game that the Flyers couldn't quite close out. 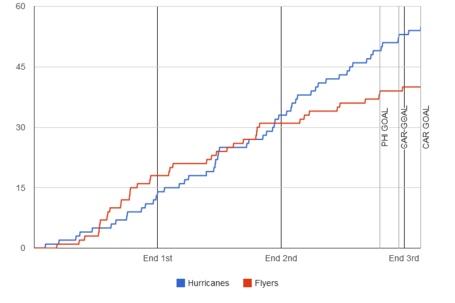