Jay Rosehill says that if you dislike fighting in hockey, you don't like hockey

Jay Rosehill spoke out about fighting in hockey after Monday's loss in Ottawa. He apparently thinks that I don't like hockey, and I take offense to that.

Share All sharing options for: Jay Rosehill says that if you dislike fighting in hockey, you don't like hockey

I can agree with Flyers enforcer Jay Rosehill on one thing: James Neal is a piece of shit. He blatantly kneed Brad Marchand in the head on Saturday night and was suspended five games for the gutless move. He deserved more than five games, especially because he has a reputation as a dirty piece of shit.

That's about the extent of our agreement, though. Rosehill was asked about the mess that happened on Saturday between the Bruins and the Penguins, and he got into the debate on fighting in the NHL and basically said that if you don't agree that fighting in hockey is great, you're not a real fan.

Rogers Sportsnet has the video.

Here's the relevant part in text form in case you can't see the video:

It's unfortunate, because it feels like those are the people who don't enjoy our game and aren't fans of our game. I don't know if they feel a power in changing the game or something, and they want to see how much they can write or who can write the most scathing article until maybe they change the game. And maybe the feel like, "hey, we did it," you know?

That's frustrating, because a lot of people like our game. You poll 98 percent of the league and everyone likes the way it is. It's not just the two percent of guys who might fight every once in a while who want to keep it in there. It's 98 percent of the league. That goes for everybody, you know, up and down -- fans, people that love the game. People I know back home that love hockey are getting frustrated with the way it's being played because guys hands are tied in certain situations and it just can't be played the way it was played before.

Obviously, you've got to protect the players but at the same time this game is never going to be safe. Every time there's a concussion, we don't need to have a rule change. It's frustrating to watch and I know the NHL's hands are tied and they're in a tough position right now.

You're trying to keep the players safe and you're trying to keep the integrity of our game as well. Most guys get concussions from body checks, but are we going take that out of the game as well? Of course not. It's tough right now, and I know it's a big thing and the media seems to really wanna create a storm out of it right now, and I think that's unfortunate now too.

That's a lot to unpack, but the overwhelming point Rosehill seems to be making is that this is all some media crusade. Even more directly, Rosehill seems to be implying that anybody who doesn't like fighting in hockey isn't a "real fan" or some sort of horseshit like that. Of course, the reality is a bit more nuanced than that.

The enforcer role is the problem 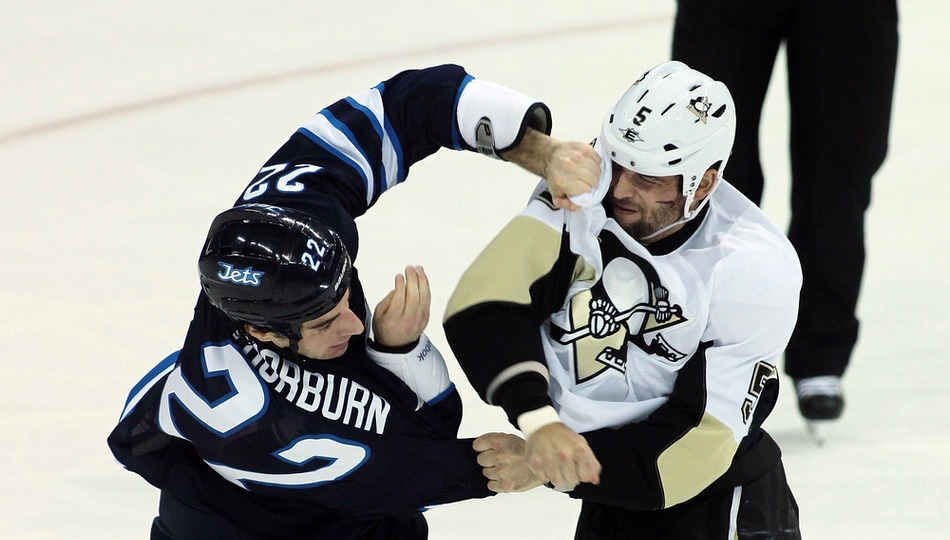 Fighting isn't the problem. It's the Gladiator sideshow put on by the league's enforcers that's the problem. I wrote this almost exactly two years ago, and it still applies today.

I've been watching hockey since before I can even remember. I love the game more than I love most people. I enjoy hockey fights, and I won't lie and say otherwise. In the heat of a game, a fight can be extremely exciting and entertaining and even crucial to the outcome under the right circumstances. It's part of the game and it shouldn't go anywhere.

But there are extremely reasonable people who both love hockey and hate fights between enforcers -- or, as I call them, hired fists -- like Rosehill. Not only do these fights have zero impact on the game, but the salaries of these players are drains on teams in a salary capped world where every dollar spent on player costs matters to a team. Ignoring all of that, there are legitimate worries about the health of these players, both long-term and short-term.

I wrote about this two years ago in the story you can see above if interested, but here's one paragraph that basically sums up my thinking:

[Former enforcers] talk of a culture not based on hockey, but on training in boxing gyms. Scanning opposing rosters with an eye on the size of the opponents, not point totals or face off wins or plus-minus ratings. It's a game within a game that doesn't really have anything to do with the actual game. It's a Gladiator show masked as ice hockey.

There's no room for that in our game anymore. It serves no purpose, and from Derek Boogaard to Bob Probert, it's left an ugly trail behind. There is room for fighting, and outright banning it would be a hasty, silly move on the NHL's part. Luckily, we're nowhere near that. But there's no need for the dudes who ride the bench for all but three or four minutes a night, waiting for their chance to skate around, looking for a fight.

I love the game of hockey, and there's this real debate to be had about the role of fighting in hockey. Rosehill isn't doing any favors to that debate (or to anyone but himself, really) when he dismisses the opposing side as people who "aren't fans of our game."

I think your job shouldn't exist, Jay. Sorry about that. But that doesn't mean I don't love hockey.