Simon Gagne traded back to Flyers (!)

Share All sharing options for: Simon Gagne traded back to Flyers (!)

The Flyers announced today they've acquired Gags from the Los Angeles Kings in exchange for a conditional fourth-round. He's been a healthy scratch from the Kings lineup of late so it's not necessarily shocking that he's been traded, and hey, the Flyers could use the extra boost offensively and Gagne could probably be used on the second power play.

Does the Gagne trade help the team? 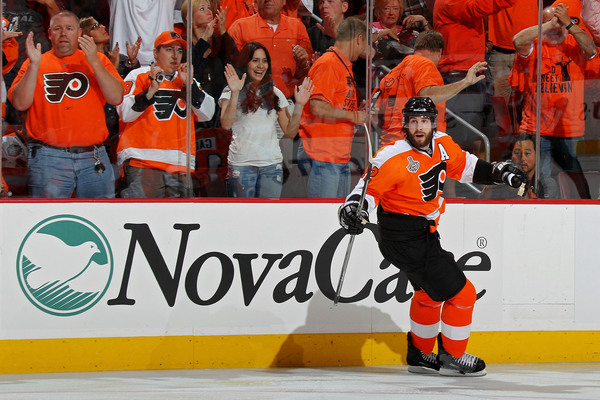 Let's settle down for a second and talk: Does this deal make the Flyers a better team?

We'll have to wait and see where he falls on the depth chart and, of course, what the condition is on that traded draft pick, which originally came from the Coyotes. My guess is that it's tied to Gagne playing a certain number of games this season, given his recent injury woes and his lack of production so far this season. He's scored five points in 11 games and hasn't played since Feb. 17.

He makes $3.5 million against the cap, he's old and likely near retirement, he's had concussion problems, and a fourth-rounder can be valuable. But that's why the condition on the pick is important, and Gagne can still be a productive player. He did play nearly 18 minutes a night in his games with the Kings last year, and he scored seven goals and 10 assists. A long cry from his prime, and no longer top line quality, but it's better than a number of players on the Flyers roster at present.

Most importantly: Gagne has a very real (likely?) chance of retiring as a member of the Philadelphia Flyers. Gagne's back!