Firing Peter Laviolette is not the answer

Peter Laviolette is likely first in line to be the scapegoat regardless of what the future holds for the Philadelphia Flyers, but firing the head coach won't fix the team's problems.

Share All sharing options for: Firing Peter Laviolette is not the answer

But when you're talking about making changes to a team in an effort to get them back to a level where they can compete for the Stanley Cup, you have to look at the reasons behind why you'd make that change:

As our old friend Geoff Detweiler remarked to me last night, it's like the Flyers have given a stock car to sprinter and told him to go really fast. Or perhaps a better analogy: They've given a cook a slab of meat and asked him to cook for a table of vegetarians. Or, since we're really awful at analogies, the personnel on hand doesn't suit the style of game the Flyers want to play.

Maybe that's partly on Laviolette. He's been given a different mix of players -- notably, much slower and older on the blue line -- and has seemingly refused to change from an uptempo style of hockey that relies on those slow, old blueliners to be, well, the opposite of old and slow. But it's clear that the problems are bigger than just the coach.

If the Flyers fire Peter Laviolette, will that firing fix their problems? No, it won't.

Firing Peter Laviolette is not the solution to the Flyers problems. But we haven't answered that third question just yet. Can the Flyers move on with Peter Laviolette behind the bench? I think that Laviolette's a good coach and that while he's made some questionable decisions this season -- less ice time for Couturier, for example -- he's generally a positive. He's put a guy like Luke Schenn in a position to succeed this season, as he's done with Jakub Voracek this year, Wayne Simmonds last year, etc. The list of positive Peter Laviolette coaching decisions is much longer than the list of negative ones, even if we have a tendency to magnify those negative ones.

The Flyers can win with Peter Laviolette behind the bench. It's just a matter of whether or not he has the personnel to get the job done. Right now, he does not. Paul Holmgren said Thursday that he hasn't thought about firing his head coach and that the team is sticking with what they have for the immediate future. It's no secret to anybody -- whether the organization admits it publicly or not, they have to know this as well -- that the Flyers are still a bit away from true Cup contention. They need to fix the defense, and the core up front, while solid and young and exciting, is still growing.

The immediate question should not be about Peter Laviolette. He's simply doing the best with what he has on hand, and yeah, he's probably feeling the heat a bit because his team isn't winning. That's just the nature of coaching in the NHL. 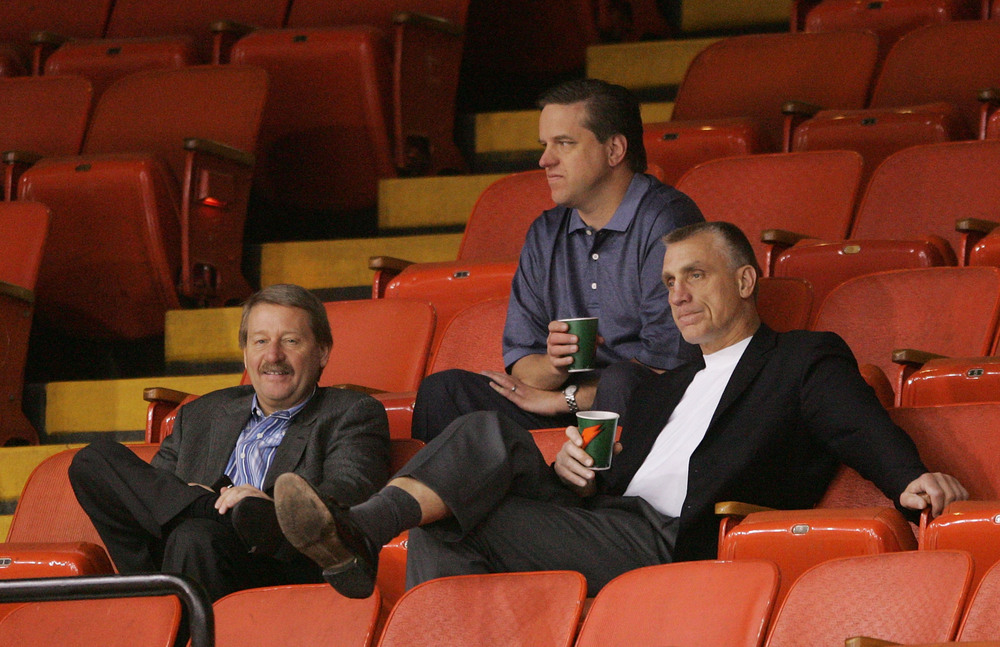 But the real debate we should be having is whether or not Paul Holmgren deserves to keep his job. The decisions of the summer of 2011 are obviously setting this team back in the interim, and only time will tell if the new core -- Voracek, Simmonds, Couturier, Brayden Schenn, and Giroux -- is better than the old core that was ditched in the summer of 2011.

In the meantime, Holmgren has made decisions that have taken the team, at least for the time being, from playoff contender to bubble team at best. The state of the defense has crumbled under his leadership and there is truly no strong strategy here for fixing it. The best case scenario seems to be trading away a package of valuable youth for a young defenseman that can anchor the blueline for the long-term future, but that's not a cheap price to pay and it could decimate the "new core" Holmgren went far, far out of his way to build.

Alternatively, the Flyers could draft a stud defenseman with a high draft pick this year (presuming they keep losing), but developing an 18-year-old prospect into a No. 1 anchor is not a quick process, even if he has the potential to be an elite NHL defender. There would likely be a long period of losing in the interim -- a period that could eat into the prime years of those core players, including Giroux -- and that's not acceptable to us as fans or to the 80 year old owner who really wants to see his team win the Stanley Cup again while he's still a living, breathing thing on this planet.

There are no easy answers here. We'll surely continue to debate the merits of Paul Holmgren's job performance and the pros and cons of bringing in a new general manager. I'm not sold either way. One thing I do know, though, is that it's hard to pinpoint the Flyers problems to their head coach.

But unfortunately for Peter Laviolette, that may not matter. He's first in line to be the scapegoat regardless of what the future holds.