An overview of modern hockey stats

In part 2 of our stat primer, we look at the stats that shed light on individual player contributions and where modern analysis is headed.

Share All sharing options for: An overview of modern hockey stats

Yesterday, I talked about team-level statistics and how a team's shot differential is one of the most important tools for forecasting their future results. Today, we'll move on to a conversation about what some non-traditional stats can tell us about individual contributions.

For starters, if we know that a team's shot differential is a strong predictor of their future results, then it makes sense to look at what their shot differential is with a given player on the ice. Corsi is a metric that is basically like a plus/minus, except based on shot attempts instead of goals; it is an important tool for player evaluation.

Why should we prefer using shot attempts, when goals are what we really care about? Like we talked about yesterday, shooting and save percentages vary quite a bit over small sample sizes, and the ~1000 minutes a player is on the ice for in a season aren't nearly enough for that randomness to even out.

For example, last year Sean Couturier was +18 and Brayden Schenn was -7 in traditional plus/minus. But the Flyers actually got slightly more shots with Schenn on the ice -- the difference between them was all in the shooting percentages. Those percentages are prone to large fluctuations and aren't very predictive; indeed they've reversed this year:

Using Corsi as a shot-based plus/minus lets us strip out a lot of this fluctuation from shooting and save percentages and focus on who generally finds themselves in the offensive zone, generating scoring chances. Nobody is trying to argue that shot attempts are the objective and that players should start shooting from the red line to increase their Corsi; the point is that a player who is doing all of the right things to score goals will also end up on the ice for a lot of shot attempts.

If you just rank all of the players in the NHL by Corsi, you come up with a list that does OK but has some clear flaws. The problem is that it is missing context. Does a player play with great teammates? Against weak competition? Starting a lot of shifts in the offensive zone? All of these things could boost his results and inflate his numbers.

Fortunately, we have metrics to try to assess each of these things.

One way we can adjust for this is with a statistic called Relative Corsi (often abbreviated Corsi Rel), which compares the team's shot differential with a player on the ice to their shot differential with him off the ice. The Flyers outshoot their opponents by 6.6 shot attempts per 60 minutes when Timonen is on the ice. They get outshot by 4.1 shots per 60 when he is off the ice, so Corsi Rel would say that he improves the team by 10.7 shots per 60, which is quite good.

Corsi Rel isn't perfect, though. It does a reasonable job of accounting for the forwards in front of Timonen, but it is quite closely tied to their defensive depth -- if the guys who come on the ice whenever he goes off are inept, that will make him look better by comparison. There are ways of trying to tease this apart by looking at the performance of specific pairs of players, but the simplest thing to do is use Corsi Rel with a bit of subjective modification, recognizing that it is easier to have a good Corsi Rel on a team with little depth at your position.

We have more direct metrics for assessing a player's quality of competition. The most widespread is one calculated at behindthenet.ca, called Corsi Rel QoC. Corsi Rel QoC assesses the average Corsi Rel of a player's opponents and does a pretty good job of showing who goes against the opponents' top lines. This tells us something about what a coach thinks of his players, and we often infer that a player who is deployed against the opponents' best is probably good defensively.

All of the above combines to give a sense of which way the ice tilted with a player on the ice. One nice visual way to express this is with a bubble chart, where the position of a player's bubble reflects his usage and the size and color of the bubble reflect his results: 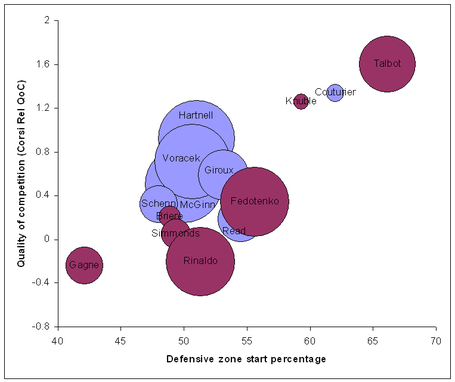 Someone who faces strong competition, starts in his own end a lot, and still has a positive shot differential (like Couturier) is probably doing something right, whereas someone getting outshot by weak competition (like Briere) is probably struggling with something. But these stats don't tell us exactly what that is. The current revolution in advanced stats is starting to break things down from team-level results to individual contributions -- figuring out exactly what a player is doing to help drive shot differential.

We've talked about zone entry data a couple of times this year, and now perhaps you can see how this fits into our evaluations. The stats show that carrying the puck into the offensive zone generates more than twice as many shots and goals as dumping it in, so a player who is very good at gaining the line will help drive his team to have a positive shot differential.

We can also use zone entry data to evaluate off-puck contributions. If players have a lot more zone entries when Timonen is on the ice, we can infer that he is making a good first pass that helps put them in good position (something that can also be assessed more directly with zone exit tracking). At the other end of the ice, we can see whether his positioning and mobility force the opponent to dump the puck in more often.

We are in the early stages of making this transition from assessing results to assessing skills, and the data is not universally available yet. But this is where analysis is headed, and it is an exciting step forward.