A trip to the Sloan Sports Analytics Conference, where everybody trolls the Flyers

I traveled to Boston for this year's Sloan Sports Analytics Conference, or as we'll alternatively call it, Trollfest 2013.

Share All sharing options for: A trip to the Sloan Sports Analytics Conference, where everybody trolls the Flyers

Last week, I went to Boston to present a poster on zone entries at the Sloan Sports Analytics Conference. Here's a link to that if you're interested, and here are some odds and ends from the experience -- or, what I'm calling Trollfest 2013.

When I arranged to meet up with Ryan Lambert, I had to expect a little trolling, but I wasn't prepared for anything this elaborate. He arranged to go out for drinks but said we couldn't go to the bars near the conference because they were "for bros". He suggested a place a couple of miles away instead, so a group of us trooped over there, only to push open the door and find them setting up for a beer pong tournament. With one team dressed as Mario and Luigi. Way to save us from the bros, Lambert.

I didn't expect nearly as much trolling from NHL teams as I got. I'm pretty sure theirs was all unintentional, but it was relentless nevertheless. 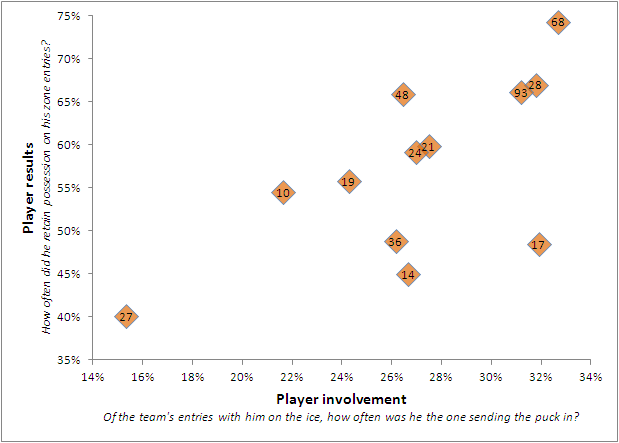 The chart Provenzano got all trolly about.

When Frank Provenzano, assistant general manager of the Stars, was at my poster, he pointed to the orange dot for No. 68 in the very top-right of the zone entry chart and said "we have that guy now."

When Craig MacTavish, senior VP of hockey ops for the Oilers, came to my poster, he looked at it for about a second and a half before saying "we just hired a guy to do all this GVT stuff for us." I wasn't sure what to say, and he asked if I used GVT. I said "no..." and he said "I can see you have more to say about that, but I need to go. We'll catch up later" and made his exit.

But the team with the most material for trolling was undoubtedly the Lightning. At dinner on Friday, I found myself sitting next to their in-house statistical analyst, Michael Peterson.

He asked how Flyers fans felt about losing Matt Carle. I told him that some of us saw it as a major loss, but that the broader fan base hated Carle and saw it as addition by subtraction. He looked absolutely shocked and a bit confused, forcing me to explain the perspective of someone who doesn't think highly of Carle.

Then he remembered there was some older history too and asked what we thought about the (original) Simon Gagne trade. Augh.

An amusing tangent here: I deflected with a joke about how the net result of the two Gagne trades was that the Flyers gave up a fourth round pick to get Matt Walker and a fourth, and that this was a net loss for the Flyers. He continued his unintentional trolling by thinking that the Flyers had to have gotten more picks than just a fourth in the first trade, so we went to Google to check. There, we discovered that if you type "Gagne for", Google autocompletes to "Gagne for Luongo," which is interesting.

The final nail in the coffin came when he inquired about Andrej Meszaros. He acknowledged that Meszaros has been better in Philadelphia, but wondered why someone would want to add a guy with a $4 million cap hit with the intent of putting him on the third pairing. Once again, I had no answer.

How I long for a day when I can attend an analytical conference and not feel like everyone who mentions the Flyers is trolling me.

On an unrelated note, the thing that stood out most strongly to me from the panels was the amount of effort other leagues are devoting to medical analytics. Teams are starting to track biometrics and performance and injury frequency as a function of training schedule or playing time, with the goal of understanding the optimal usage -- and what they're giving up if they decide to have a player play every minute of overtime.

Obviously our ability to measure something like this from the outside is pretty limited, but I'm intrigued by the idea and wonder how much of an impact they'll have.