Was a bad change to blame for Rick Nash's second goal against Ilya Bryzgalov on Tuesday night?

Share All sharing options for: Rick Nash goal video breakdown: Is the line change to blame?

On the Rangers' last goal Tuesday night, everyone blamed a bad line change. I don't think the line change was the primary problem, though. Let's go to the video.

As Luke Schenn brings the puck up the ice 40 seconds into his shift, all three Flyer forwards are standing flat-footed on the blue line. He gets to the red line and dumps the puck in: 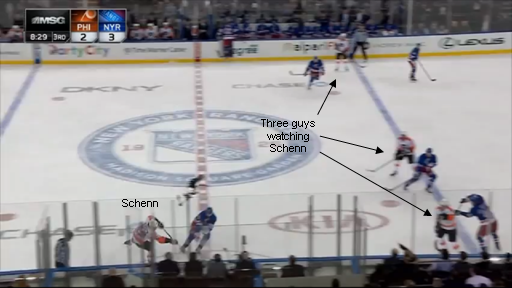 The hard dump-in gets to Lundqvist quickly, leaving him plenty of time and space to beat the forwards who are still just getting their legs moving -- Schenn has moved from the red line to the blue line in the time it has taken the forwards to move one stride into the offensive zone: 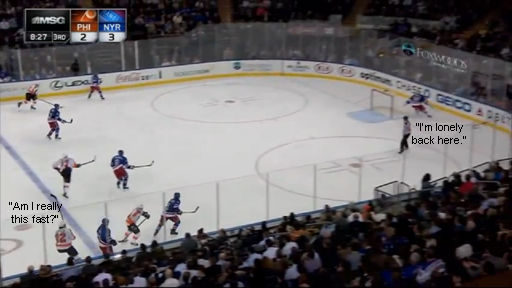 The Rangers chip the puck up the far boards: 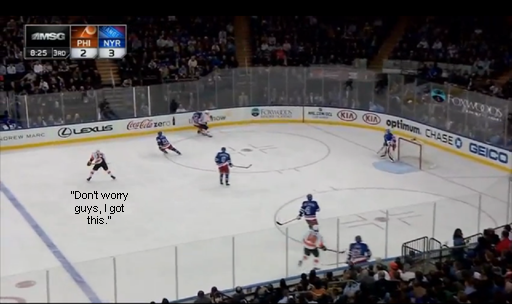 Instead of taking a defensive angle, Simmonds tries to swat a bouncing puck in deeper and misses wildly. Two Rangers on the far boards and Nash on the near boards are moving up ice in anticipation: 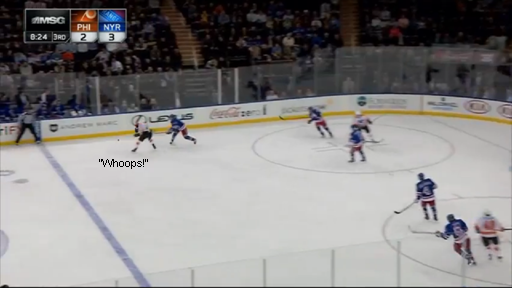 Simmonds' swat attempt leaves him completely out of the play: 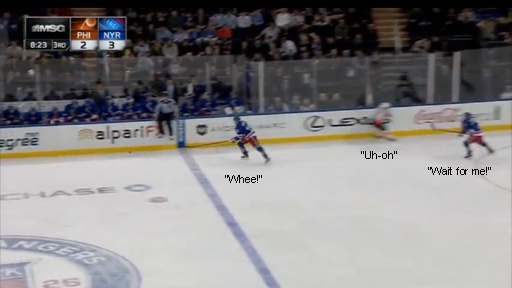 Schenn was in the offensive zone on the near boards at 8:26. He skated reasonably hard back to the bench and already has a leg over the boards four seconds later, but the puck goes from behind the goal to the Flyers zone faster than he can skate. 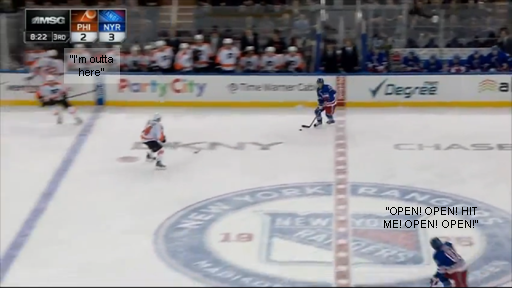 Timonen glances behind him to see where Coburn is and decides to play the puck-handler instead of making a bee-line for the far boards, which leaves Nash open in the developing 3-on-2: 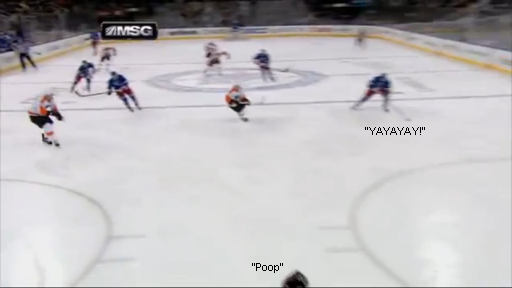 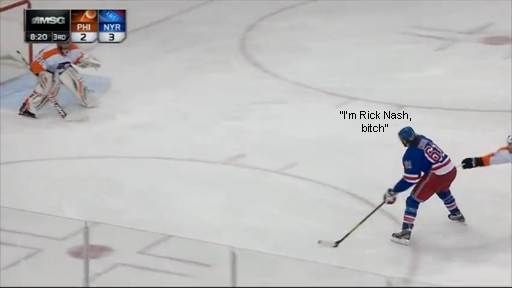 Timonen hooks Nash badly enough to make him lose the puck briefly and draw a penalty shot call, but Nash regains the puck in time to beat Bryzgalov's poke check and scores: 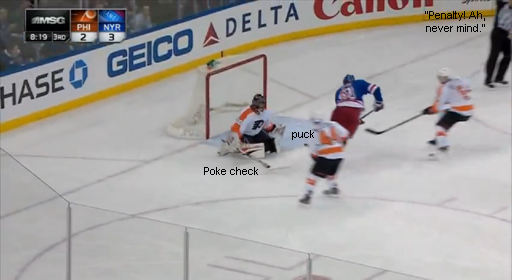 What could have been done differently?

To me, this all starts with a terrible zone entry. Schenn gets the puck below the faceoff dot in his own end and skates 70 feet in a straight line uncontested before dumping the puck in. I think it's inexcusable that the forwards used that time to stand flat-footed at the blue line, rather than giving him a target for a pass to try to carry the puck in or getting some speed going to set them up to retrieve the puck on a dump-in.

Knowing that he was near the end of his shift, Schenn could have headed straight to the bench when he dumped the puck in rather than following it for a couple of seconds. If the Flyers had been leading 3-2, I'm sure he would have. However, when trailing, teams press to generate offense by having fewer dump-and-change plays and more dump-and-chase.

With the other two forwards already behind the play and a wildly bouncing puck, Simmonds needs to back off conservatively rather than pinch in for a backhand knee-high flail at the puck.

The poor play in the offensive end leads to a three-on-two rush. Timonen then misreads the play and makes it a lot worse -- if he gets out to Nash, that will leave Coburn to handle Stepan and a trailer. The most likely outcome then would be that Stepan leaves a drop pass and crashes the net, leaving the trailer open for a slapshot from the circle through a screen. This would certainly be a dangerous shot, but it's not nearly as bad as Rick Nash getting a breakaway.

The line change did play a role here. If Schenn had sprinted to the bench immediately after dumping the puck in, Coburn would have been on the ice a second or two earlier and maybe Timonen would have read the play better. But the poor play of the forwards had already created a 3-on-2 -- a dump-in is supposed to be the safe play, and shouldn't lead to an odd-man rush the other way. And while perhaps an earlier line change would lead to cleaner positioning and make the decision on that 3-on-2 easier for Timonen, he had plenty of time to recognize and respond to the threat Nash posed.

People have a tendency to pin the blame on the player or event closest to the goal; they saw a guy hopping over the boards during the rush and blamed the line change. But hockey is a fluid, interconnected game, and often that proximal play isn't the true cause. In this case, the line change should never have been in harm's way if the forwards had either slowed the advance of the puck even the tiniest bit or helped back on defense -- and even once they failed to do that, a better decision from Timonen could easily have covered for Coburn's late entry to the ice.