Wayne Simmonds is through to the Round of 8 in the NHL 14 cover vote.

Look at that face up there. LOOK AT IT.

For the second year in a row, a Flyer defeated Malkin in the EA Sports NHL series cover vote. It was Claude Giroux a year ago, and this time Wayne Simmonds is through to the quarterfinals. We're down to just eight players, and Simmonds will take on Hart Trophy finalist and New York Islanders forward John Tavares in the next round.

The other matchups: Pavel Datsyuk vs. Joffrey Lupul, Taylor Hall vs. Sergei Bobrovsky and Martin Brodeur vs. James van Riemsdyk. We could have a final four with guys who all played in Philly at some point, which is both pretty neat and also really, really depressing.

Also of note: There are a lot of racists on the Internet and in the world, and they all deserved to be called out for it. Can't possibly call do that to all of em, but when somebody is called out for being a racist asshole and then they laugh about it ... well, time to rally the troops.

This guy is a racist: 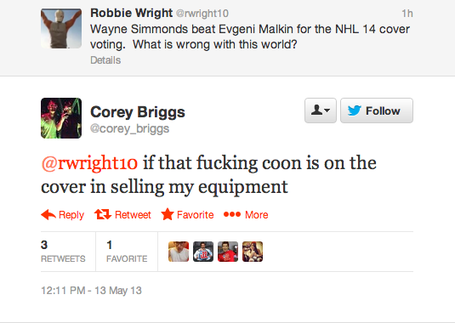 ... which, of course, has since been deleted. He then proceeded to brag about it on Twitter, though: 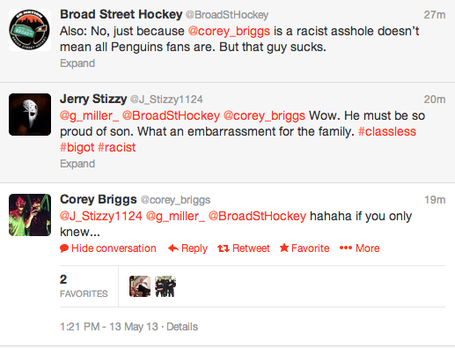 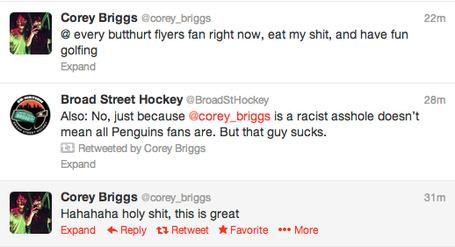 All of these have been deleted. He also deleted his entire account. But the Internet doesn't forget.

An update: We posted the name and picture of Larry Briggs, Corey's father, along with this story when we first published it. Why did we do that?

Corey played hockey at the California University of Pennsylvania. Larry works in recruiting and scouting for the hockey program at that school. If he worked in any other context, we wouldn't have posted the number, but in this case it was completely related. The number is public info, right there on the team website. It was relevant. We wanted the program to hold Corey accountable for being a racist idiot.

After we posted this story, we quickly learned that Corey no longer plays hockey at Cal U. He hasn't been there since December, despite the fact that he was still listed on the roster and his Twitter photo was a picture of him, his father and his brother (who still plays there) all in Cal U jerseys.

@broadsthockey Sent email to coach at Cal U of PA. He responded quickly. Racist idiot dropped out in December and is no longer in team.

Shortly after, Larry and I talked on the phone. He was pretty clearly upset -- more so with the fact that this was yet another black eye on the Cal U hockey program than anything else. He mentioned a few times that he was disappointed in his son and that he was going to get "chewed out" when he got home tonight. So, there's that.

Ultimately, accountability happened. We don't want this to be a black eye on the Cal U program, especially since Corey wasn't on the team any longer. Hopefully he learns a lesson, though: what you say on the Internet matters. You can't say racist things with your mouth or with a keyboard without being held accountable for them. It's 2013. Enough of this shit.