How do shooting percentage and shot rates each impact scoring?

Share All sharing options for: How do shooting percentage and shot rates each impact scoring?

Point totals have a very strong influence in how we evaluate forwards. The goal and assist columns in a stat sheet are very frequently referenced, and the plays where those stats are accumulated weigh heavily on our eye test and our memory.

But we don't talk much about what drives point scoring.

In the plots below, we look at the correlation between a player's point scoring rate and either (top plot) his team's shot rate with him on the ice or (bottom plot) his team's shooting percentage with him on the ice. A strong correlation would mean that having a high value for one would lead to a high value for the other and the points would fall near a straight line. 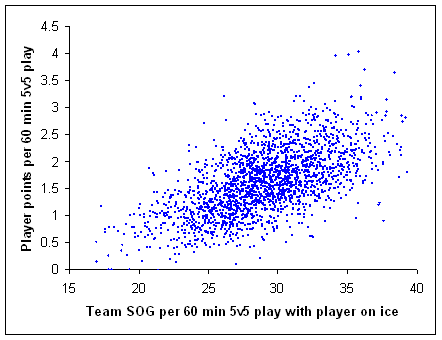 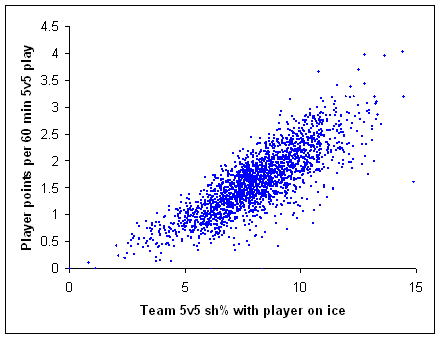 It's clear from these plots that in any given season, a player's point scoring rate is much more heavily driven by the shooting percentages than the shot rates. Both have an effect, but the correlation in the lower plot is much stronger (R^2 of 0.67 vs 0.37). 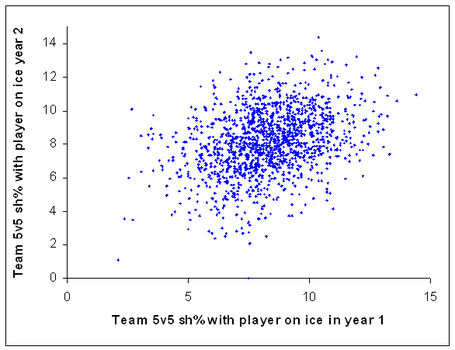 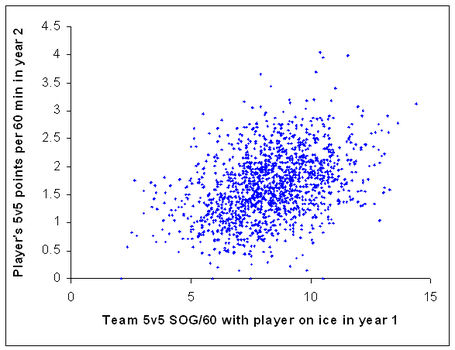 It turns out that shooting percentages aren't very repeatable after all; these correlation plots look more like blobs than lines.

Essentially, the variance in shooting percentage is a much bigger factor than either the shot rate or the talent component of shooting percentage. So the team's shooting percentage with a given player on the ice is a strong driver of his point total in any given year, but it turns out to be a pretty poor predictor of what will happen next year. Even though shot rate has less impact on point scoring, its greater repeatability (R^2 of 0.36 vs 0.11) actually makes it more useful for predicting next year's point totals.

As we move to larger sample sizes, the variance will start to wash out a bit and we can get a better indication of a player's talent. Still, shot rate remains both more repeatable and more predictive of future point scoring:

Up to now, I've framed this as an either/or choice, but it really isn't. It's interesting to note that shot rate appears to be a larger factor than shooting percentage, but both factors do contribute, and we should use both factors when trying to project a player's future scoring.

Point totals are a reasonable way to measure a player's offensive contributions. But we need to keep in mind that they're not only driven by usage (ice time, power play time, and situational deployment); they're also heavily driven by random blips in shooting percentage, blips that don't tell us much at all about what will happen in the future.