We've heard a lot about Sean Couturier's "sophomore slump," so let's look at his offensive numbers and see what the problem was and how much we should read into it.

Let me first say this: right now, as you read this piece, Sean Couturier is one of the best defensive forwards in the National Hockey League, despite being all of 20 years old. Any criticism of him otherwise should be noted in light of this fact, because it's a fairly incredible one, and he could be scoring ten points a season and still be pretty valuable with his defensive talents.

But if you read this site on a semi-regular basis, you already know that fact, so this post isn't going to talk very much about Corsi or zone starts or all of that. The post linked in the previous paragraph posed the question of how much offensive potential Sean Couturier has, and that's a question that's on everyone's mind following this season.

I think some of the critiques lobbed his way this season are a bit harsh, and I still haven't seen anything written about him since roughly March that didn't have the phrase "sophomore slump" in it somewhere, which is annoying. But his offensive game wasn't where we wanted it to be this year, and that's near impossible to deny.

So let's talk a bit about the guy who's gone from "unanticipated surprise of the Jeff Carter trade" to "untouchable, even for Shea Weber" to "disappointing sophomore forward who can't score".

First of all, it's worth noting that Couturier's total point production really didn't fall off much at all from last year to this year. He went from a rookie year output of 0.35 points per game to 0.33 per game this year. There was a dropoff at even strength (1.81 P/60 last year to 1.14 this year), but improved performance on the PP (1.73 P/60 last year, 3.51 this year) helped close that gap.

Granted, it's fair to expect him to take a step forward in his 19/20-year old season, compared to his 18/19-year old one, so that can be seen as disappointing regardless. But it's not as though he was that much worse than last year.

When looking at surprising point totals (in either direction), we also try to consider shooting percentage, since -- as our own Eric T. recently pointed out -- year-to-year fluctuation there can frequently and drastically affect a player's scoring. You can pretty plainly see that those numbers trended in the wrong direction for Couturier this year. (percentages from behindthenet.ca)

One thing that frustrated Flyers fans last year was the fact that Couturier spent far, far too much time saddled with linemates simply not up to his offensive skill level. As you probably know, that trend continued this year. Here are his most frequent icemates (among forwards), via stats.hockeyanalysis.com:

Among his five most frequent linemates, only one of them -- Matt Read -- exhibited much in the way of offensive talent this year, maybe two if you also include Knuble. It's one thing to put the guy in a defensively-oriented position; it's another to essentially neuter any offensive skill there by repeatedly putting him on a line with fourth-line guys.

So the question then becomes: how much better did he look, offensively, when he was on the ice with quality offensive players? Couturier scored four 5-on-5 goals and tallied six 5-on-5 assists this year. Here are the forwards who were on the ice with him when he tallied each of those points.

The top three forwards when it came to helping Couturier get points were (a) all fairly skilled offensive wingers and were (b) second, seventh, and ninth on the list of his most frequent linemates. If we put that into P/60 form, including all players on the ice for at least two Couturier points (with the reminder that Couturier himself was around 1.14 P/60)...

To put those results for Voracek and Simmonds into perspective: in the 2011-12 season Claude Giroux scored 2.73 points per 60 minutes at 5-on-5. When put with a few decent players on his wing, Couturier was -- at times -- scoring at even higher rates than Giroux during his breakout season.

Or, put another way: Couturier's scoring pace while on the ice with Voracek would've made him the eighth-highest scoring forward in the league, per 60, at 5-on-5. Moderately impressive.

Granted, we're having a bit of fun with small samples here, but with the limited numbers we have, we've absolutely got a reason to believe that playing with more skilled linemates will, in fact, help his offensive output.

Even besides the linemate issues, one of the more maddening things we saw this year was the way that Couturier's ice time was handled by Peter Laviolette. There are two points I want to single out here.

The first one was a lot less significant long-term, I'd think, but it's worth noting: after spending the first quarter or so of the season with mostly-talented linemates (a bit of Voracek, some Matt Read, a pinch of Tye McGinn, to go with guys like Knuble and Talbot), Couturier missed two games with the flu on February 11 and 12. In the game that followed -- a contest on February 15 with New Jersey -- he found himself getting slightly fewer minutes than before, and on the fourth line with Talbot and Rinaldo. That trend would continue for a few more games, and though his ice time would be pulled back up by a performance against Pittsburgh on February 20 that included six shots on net, it's still a bit perplexing why Laviolette would bring Couturier back from something like the flu and place him on the fourth line.

But the more noticeable shift came a couple of weeks later. The day after Simon Gagne's triumphant return to Philadelphia, Couturier and Gagne found themselves paired on a line together with Max Talbot. In Gagne's first two games back (on February 27 against Washington and March 2 against Ottawa), those three guys, while on the ice together, combined for 15 shots on goal, and did so in roughly 21 total minutes of ice time together. That is very impressive for a third line, and while none of those shots went in the net, they sure were knocking on the door a lot.

In the game following -- a 4-2 loss to the Rangers -- the unit managed only two shots, with Couturier picking up none. Laviolette shifted the lines around the next game against Pittsburgh, putting Read in Talbot's place, and while that's not a move to complain about, the problem came when Laviolette parked Couturier on the bench for all but two shifts in the final 25 minutes or so of the game, all after he failed to make a play defensively on the game-tying goal. (He did not register a shot on goal again in that game, nor did he in the following game at Boston.)

While he'd been stuck in an offensive drought for a while, that game marked the point where everything really fell off for him. You could see it in his ice time -- before that Pittsburgh game, he had only played less than 14:54 of ice time once; beginning with that game, he wouldn't top that mark again at any point in the next eight games.

In turn, his offensive problems stopped being just luck- and shooting-related and started also being production-related. Beginning around the time of that one series of games, his shot numbers would plummet, bottoming out in late March in a game against the Islanders.

Fortunately, things picked up a bit in the season's final month. In the game following THAT contest, he would pick up an assist against Boston, and it appeared that was all that Laviolette needed to see, as his ice time would continue to increase fairly steadily the rest of the season beyond that. (That point also began a stretch of seven points in 15 games for Couturier, helping him end the season on a pretty good note despite spending a lot of time alongside Adam Hall and Jay Rosehill.)

So let's sum all of that up, then. Marking the important dates there, here are Couturier's 10-game rolling averages for shots on goal per game: 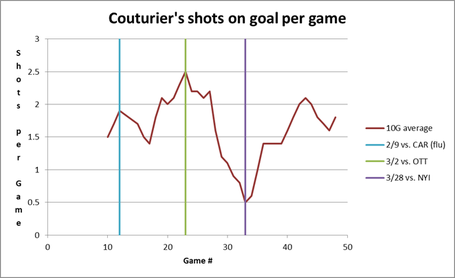 And here they are for his average ice time and shifts per game: 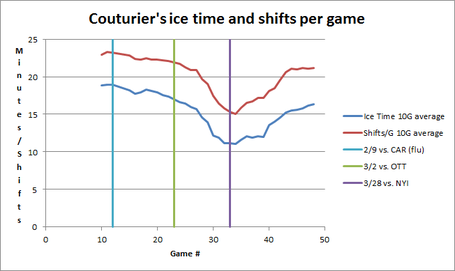 You can sort of see how the lines in both of those graphs fall off a bit after the first and second vertical lines, and bottom out at/go back up after the third one.

Essentially -- and here's what the problem boils down to -- Laviolette would tend to make some fairly kneejerk decisions when it came to Couturier, whether it involved giving him less ice time (returning from the flu to be placed on the fourth line, getting benched after the bad Pittsburgh game) or giving him more (i.e. deciding he was worth top-9 minutes again immediately after breaking his scoring slump -- not that I necessarily have a problem with that, but the thought process troubles me a bit). And if you look at both of those, his drop in ice time almost perfectly coincided with his drop in shots on net. The guy's not gonna get chances if he doesn't play.

So the moral out of all of this is pretty much just "patience", isn't it? It became fairly evident once he hit his rough patch that people's expectations of him were probably too high this year, likely based in no small part on his success against Pittsburgh in last year's postseason. He's still just 20 and is learning a lot on both sides of the ice, and a little bit of patience (and a little less kneejerkishness) on the part of the coaching staff would go a long way with him.

Couturier's shown he can put up points when surrounded by decent linemates, as guys like Voracek and Read and Simmonds can attest to. He's shown he can at least get shots to the net when put with guys who are maybe a step down from that, like Talbot or Gagne. And yes, he does a fantastic job of controlling play and possession despite facing some of the toughest defensive situations among forwards in the NHL.

Even if almost nothing changes from this year to next, and the same maddening patterns of playing time and linemates continue next year, we can probably expect a bump in his scoring rates solely on the basis of his crappy luck this year. But if Laviolette and company want to try keeping his minutes fairly steady, surrounding him with some fairly competent two-way forwards, and not reacting too much in either direction to the good or the bad that may come of it, his scoring numbers should reflect that and he'll be fine.

Exactly how fine he'll be is still a debate worth having. Those P/60 numbers with guys like Voracek and Read, while impressive, are also in a fairly small sample, and again, Eric showed back in February that guys who are asked to take on the kinds of assignments he's been asked to take on generally don't end up being big-time scorers. So while he'd still be valuable if he's in those situations, we may have to temper our expectations of him as an elite scoring forward. Or they can ease up on his responsibilities there, pair him with some more offensively-skilled players, and see if what he did with guys like Voracek and Simmonds is repeatable.

But let's not make any mistakes about it: if, despite all the bad luck and mishandling, this is really a "sophomore slump" for Sean Couturier, he's probably going to be fine.