Time spares no man, except maybe the PP specialist

A look at whether aging erodes even strength skills faster than power play ability.

Share All sharing options for: Time spares no man, except maybe the PP specialist

When Dany Heatley was traded for Martin Havlat, Kent Wilson wrote an excellent piece noting that although Heatley's power play production remained very strong, his even strength performance was in decline. In particular, his points per 60 at 5v5 had gone from 2.95 to 2.20 to 2.20 to 1.55 at the time of the article, and subsequently went to 1.47 and 1.34.

I've noted something similar from other players since then, and have wondered if it's a general trend: as players age, do they tend to maintain power play scoring longer than even strength scoring?

It seems plausible, after all. The power play relies a bit more on hands than athleticism; being a step slower won't matter quite as much there as it will at even strength. But let's see what the data says.

As always, if we're going to look for an aging effect, we need to account for survivorship bias, the error you get by not accounting for the players whose careers don't last into their 30's. To illustrate the issue, I'll start with a simplistic analysis.

Let's start with all of the times since '07-08 where a forward played at least 40 games and at least one minute of 5v4 time per game. For each of those player-seasons, we know what age the player is, and we could ask questions like "what's the average production of a 25-year-old?" We could use that to produce the following plot of 5v4 production versus age: 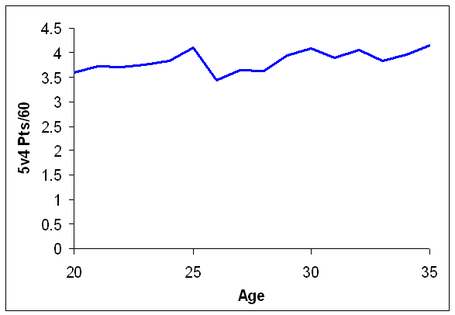 The problem is survivorship bias. Lots of guys play 40 games and at least a minute of 5v4 time at age 25, but only relatively good players get to do it at age 35. So we can see the average production rise with age -- not because the individual players are getting better, but because we're dropping more of the crummy players out of our analysis. 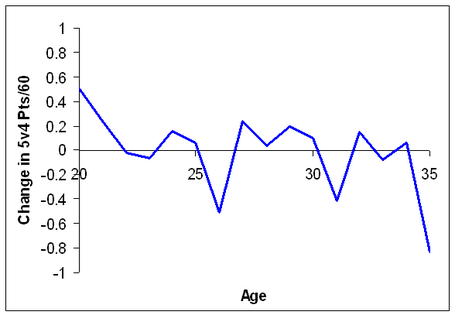 We can take this data and turn it into a typical aging curve -- a forward who had average production throughout his career and followed the above profile for annual changes would have a career arc that looked like this: 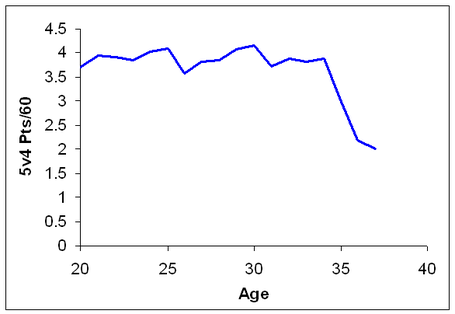 So now we have an idea of what the aging profile looks like for a player's power play production. We can do the same analysis for 5v5 production (this time using 40 games and 10 minutes 5v5 time as the cutoffs) and come up with this as an aging curve for even strength scoring: 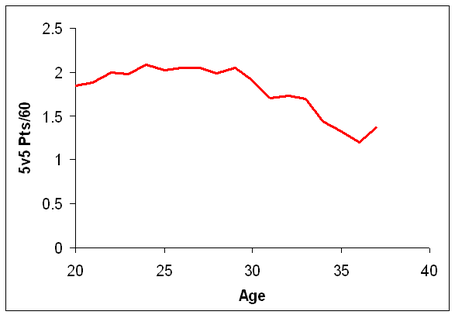 And now, finally, we can compare the two. Normalizing both of them so that their mid-20's peak is 100% gives us this comparison of the 5v5 and 5v4 aging profiles: 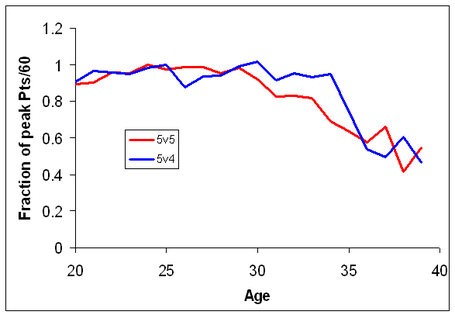 Indeed, there appears to be a clear difference. It is likely a bit overstated by random variance, but it seems clear that as they pass through their early 30's, players retain more ability to score on the power play than at even strength.