Imagine I told you that a forward played about 16 minutes a game, that he often faced the opponents' best forwards, and that he got a lot of penalty kill time but wasn't used much on the power play.

You'd probably have a pretty decent sense of what kind of player he was before you knew anything else about him -- the guys who matched that profile this year were Dave Moss, Nikolai Kulemin, Patrick Dwyer, Matt Cooke, and Chris Higgins. Just knowing how a player is used gives a good first clue about what kinds of skills he has.

In addition, this information about his usage provides important context for evaluating his results. Kulemin and Danny Briere each averaged just under a half point per game this year. But when we note that Briere had the benefit of heavy power play time, no penalty kill time, and facing the opponents' weakest forwards, it becomes clear that Kulemin had a better season. Paying attention to these clues is an important part of assessing a player's production.

There's been a lot of work done over the last six years or so on looking at various factors of usage and context, but almost all of it was done at the NHL level. Jonathan Willis first started looking at quality of competition in the AHL a few years ago and it's been an occasional feature on Coppernblue.com since then, but that's about all we have for prospects.

Since it's getting close to the draft, I'd like to talk about the draft candidates a little. Right now, we have very little statistical information on players in juniors beyond goals and assists. Those alone are important predictors of future NHL success, but like we saw with Kulemin and Briere, they're not enough -- we'd like to know more about how the players were used.

Much like the AHL gamesheets that Willis made use of, the boxscores in the KHL and SHL (formerly known as SEL) provide data on which players were on the ice for each goal. This gives us a coarse look at the player's competition -- if a player is on the ice for 100 even-strength goals, we get 100 pieces of data on what kinds of players he typically faced. Let's see what we can do with that.

My favorite approach to evaluating quality of competition is to take the average total ice time of the opposing forwards or defensemen that a player faced at even strength. Since the KHL and SHL publish ice time for each player, we can use our competition snapshot to prepare that kind of analysis for players in those leagues: 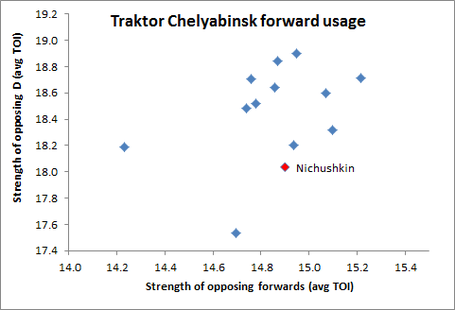 Here we can see that Valeri Nichushkin got reasonably soft minutes compared to his KHL teammates, going against middling forwards and relatively weak defensemen. That doesn't mean he's not a good player, but it does suggest that similar production from someone facing tougher competition might be more impressive.

Of course, in men's leagues like the KHL and SHL, even the best 17-year-old won't usually be asked to face the opponents' top lines, so Nichushkin's usage might not be all that different from other KHL draft prospects. Let's take a look at the CHL, where we might expect to see larger differences between players.

The CHL boxscores also record which player was on the ice for each goal, but the CHL unfortunately does not record players' ice time. So we'll need to develop an estimate of ice time if we want to make a plot like this one for a CHL team.

Fortunately, Scott Reynolds gave us a clue on how to do that. The number of goals that a player was on the ice for correlates pretty well to his ice time, at least in the NHL. We can actually refine the estimate a bit by accounting for the team's scoring rate -- if a guy was on the ice for 1/3 of the goals scored for or against his team, then he probably played about 1/3 of the minutes, give or take a little.

Using this method, we can estimate the amount of ice time each player had. For example, we'd guess that Darnell Nurse played about 25 and a half minutes per game, or that the Halifax Mooseheads played Nathan MacKinnon and Jonathan Drouin about 27 minutes per game, but Martin Frk only 22 and a half. So then we can use those estimated ice times to produce plots similar to the above for CHL players.

[Update: the Soo Greyhounds emailed to say that they track TOI in their games and had Nurse at 25:13 per game for the season. So that seems pretty good.]

You can see from this plot how an elite two-way player like Sean Monahan sees both the opponent's top line and their best defensemen: 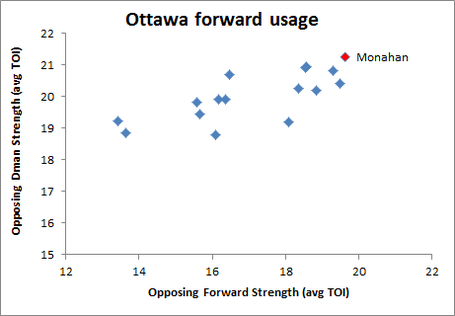 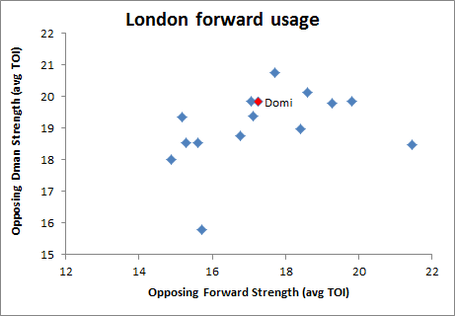 We can also return to Sweden and look at the HockeyAllsvenskan, Sweden's second-tier league. Like the KHL and SHL, the HockeyAllsvenskan is a men's league, but at a distinctly lower level -- and unlike those leagues, it does not publish TOI for each player, so we will have to use the same process we used for the CHL. We can then see that Alexander Wennberg's role in this lower-tier league is more like Domi's than Nichushkin's: 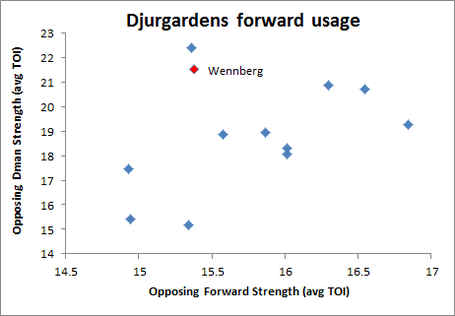 Obviously, these assessments have some error associated with them. The estimate of any given player's ice time is reasonably accurate, but certainly not perfect. And having just 100-some samples of a player's competition is clearly going to introduce some additional noise. As a quick test of whether the approximation is close enough to be useful, we can return to the NHL data.

In my previous article on this approach to assessing quality of competition, I analyzed the full NHL play by plays and prepared this plot for the Blues as an illustrative example: 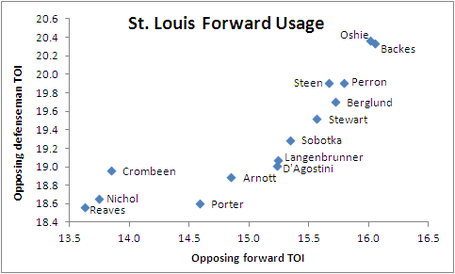 We can now prepare a similar plot by the method outlined in this article. We can strip out everything that we wouldn't have for a CHL team, leaving us with just the list of players who were on the ice for each goal. We can then build up an estimate of each player's ice time and quality of competition just like we did for CHL teams above, which gives us this plot: 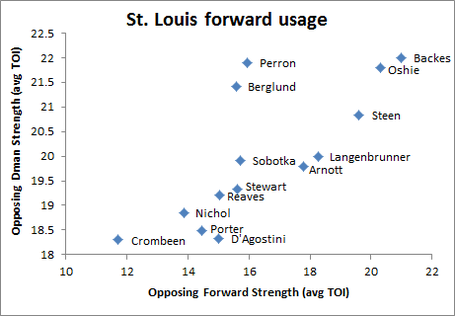 The two plots are clearly not identical, but they are qualitatively similar. The correlation between forward qualcomp across the two plots is 0.74; for defenseman qualcomp it is 0.88. Our estimation for the Blues isn't perfectly precise -- it can't reliably tell the difference between a guy who faced the third-toughest competition and the fifth-toughest. But it gives a reasonable starting point, and in the CHL, where differences in talent and usage are larger, the estimates might be better still.

For a heavily-scouted top-10 pick, teams likely have a pretty good sense of how a player was used, and this kind of estimation might not be any more accurate than what their scouts have seen. Farther down the draft, however, this understanding of ice time and quality of competition can help provide important context for player evaluations.

In fact, quality of competition might be particularly important with prospects -- not only is producing against tougher competition more impressive, but having played tougher competition may leave a prospect less likely to struggle with the leap to the NHL. This data provides a rich avenue for this kind of analysis; once we are past the short-term needs to evaluate this week's draft picks, the next step will be to re-examine historical data and see how large the impact of competition is on junior results and the likelihood of a successful NHL career.