Flyers offseason 2013: Would Ray Emery be a good fit in Philadelphia?

With reports confirming the Flyers are interested in their old netminder, let's talk about what Ray Emery would bring to Philly in a reunion tour.

Share All sharing options for: Flyers offseason 2013: Would Ray Emery be a good fit in Philadelphia?

So we're officially back on the goalie market. Fun times.

Travis went through basically all of the possibilities of who will have the honor of playing alongside Steve Mason in the Flyers' net next season on Tuesday. There have already been a few possibilities thrown out there by different writers, and we'll probably see more before July 5 rolls around. But of all the realistic possibilities out there, one seems to be dominating the early part of the discussion: former Flyers goalie Ray Emery.

CBC's Elliotte Friedman brought up the obvious connection in his 30 Thoughts column on Wednesday:

17. When Philadelphia signed Ilya Bryzgalov two years ago, Snider made it very clear he was tired of the theory that you could win without spending copious dough in net. How does he feel now? There is a very legit -- and reasonably cost-effective -- solution: Ray Emery. As his comeback began in 2011, Emery said Philly would be his first choice. Some of those Flyers are gone, but assistant GM John Paddock remains. The goalie was hugely appreciative that Paddock took a chance on him after what happened in Ottawa. Just something to watch for.

The Flyers' acquisition of Emery in 2009 was generally seen as a pretty risky decision, and you can understand his being thankful to them and possibly wanting to return the favor. Surely enough, ESPN's Pierre LeBrun followed up with confirmation of the Flyers' interest later that same day:

Ray Emery, an unrestricted free agent on July 5, is a name that surfaced among Philadelphia media speculating on what the Flyers might do to sign a goalie to share the crease with Steve Mason now that they've decided to buy out Ilya Bryzgalov.

Emery, should he not re-sign in Chicago, would certainly make sense given his past relationship with Flyers GM Paul Holmgren, and a source confirmed Wednesday that Emery is among the names on Holmgren's radar. Emery's agent, J.P. Barry of CAA Sports, was expected to touch base with the Blackhawks over the next day or so to figure out what their intentions are for the veteran goalie, who was terrific in forming a one-two punch with Corey Crawford this season.

Travis brought up the possibility of bringing back Razor on Tuesday after news of Bryzgalov's buyout broke:

Emery is an interesting option. He's by all accounts recovered from the degenerative hip disease that nearly ended his career back during his Flyers days a few years ago, and he played very well for the Blackhawks in 21 games this season. Of course, the Blackhawks were also Cup champions, and Emery was mediocre with them in 34 games during the 2011-12 season. No guarantees with Emery, but an interesting option. He's still young enough to be here a while should it pan out well.

Let's talk about him a little more. For one, there's no guarantee that Emery will even be on the market. He did an admirable job as Corey Crawford's backup/battery-mate this season, and Chicago will make some effort to re-sign him. But for one, their cap situation is a bit tight following this season (boy, doesn't that sound familiar?) to the point where they may not want to offer a backup goalie a ton of cash. And on top of that, Emery -- who has no chance at upstaging Crawford after his excellent Cup run -- may be looking out there at a chance for a bit larger a role.

So let's go ahead and assume he'll hit free agency. What does he bring to the table?

If you're more interested in what he's done recently: since he left the Flyers following his hip injury in 2010, he's posted a .911 save percentage and an SV+ of 99.9 across 65 games in Anaheim and Chicago. So again, just around league-average in that time. 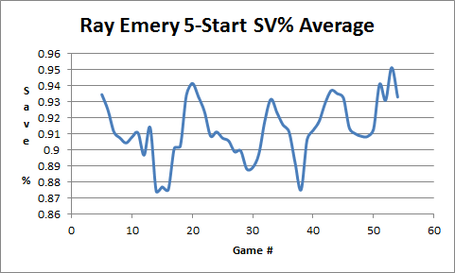 Granted, every goalie's got their peaks and valleys, and they're pronounced over a sample as limited as five games, but you can see that there's been a lot of variation in that time. You can see it on a larger scale, too; though he's averaged a .908 for his career, most of his NHL seasons have ended with a percentage a bit above or below that number.

So we know Emery can still be a quality goalie, but he's not someone for whom we quite know what we're getting. He's a bit of a gamble, so he may not be the best option to go alongside another obvious gamble in Mason. But there's upside, and like Travis said on Tuesday, he's young enough (31 next season) that if he ends up doing well here on a short-term basis he could stick around for a bit longer.

How much he'll sign for might just depend on what happens in the rest of the market. If free agency were to start today, he'd probably be the second-most appealing option out there behind Mike Smith from Phoenix. But if Vancouver gives in and ends up having to amnesty Roberto Luongo, he'll be far and away the most appealing option available, and would likely force Emery to lower his demands in what's already a buyer's market for goalies.

But we can guess in the meantime. It's tough, because there really weren't any comparable guys to Emery on last year's market that signed for a similar tandem sort of role. Looking back a little bit farther, the best comparable from the last two years may have actually been Mike Smith's two-year, $4 million deal with Phoenix. He had similar career marks to Emery (.906 save percentage to Emery's .908) but was also a bit younger and anticipated taking a slightly bigger role with that Phoenix team than Emery likely would here. It's not a perfect comparison by any means, but it may be the best out there. So pending some other entries into the market (i.e. Luongo), some short-to-medium-term deal around or maybe just above $2 million annually is probably reasonable to expect for Emery.

Ray Emery's a bit of a wild card, and maybe a little bit too much of one given the state of the team now, but if he's really willing to come back here on a fair deal, he'd be another sort of project in goal for the Flyers. He isn't my first choice, but I wouldn't be opposed to kicking the tires there and seeing what he's got left.