Estimated usage parameters for a selection of CHL prospects

A few days ago, we described how the boxscores can be analyzed to provide some information about how draft prospects were used. This article is a follow-up, with additional information for a handful of prospects of interest.

If you didn't read the previous article, you probably should, so you know where this data is coming from. But as a quick reminder, the usage information is important because it allows us to grade on a curve. A player who gets more ice time and faces weaker opposition will have more opportunities to score, and so we should keep in mind that his performance might not be quite as impressive as that of a player who achieved similar results with less beneficial usage.

With that being said, let's start with a look at three teammates who were high picks in past drafts and have remained in the CHL: Scott Laughton, Boone Jenner, and Tyler Biggs: 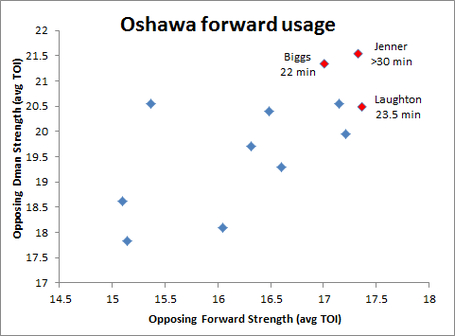 As we can see, 02h32m01s's comment that Jenner was the one playing the one playing the toughest minutes seems to be true. Their usage is similar, but he appears to have faced tougher defensemen. However, Jenner also got a lot more ice time. Laughton's estimated scoring per minute was actually higher than Jenner's.

The coaches trusted Jenner more, giving him more minutes against tougher competition, but Laughton actually had more production per minute this year -- despite being almost a full year younger.

In the last article, I showed how Max Domi was used, and several people asked about the comparison with Bo Horvat. So let's revisit that analysis: 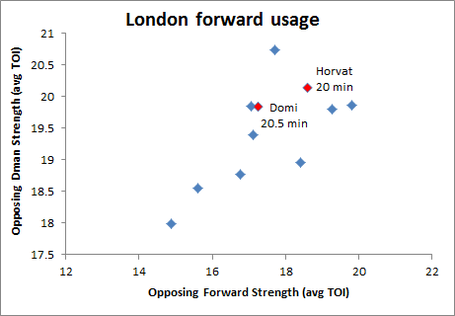 These estimates are not precise enough for me to be confident that Horvat faced much tougher competition, but it almost certainly wasn't easier. Still, Domi significantly outscored Horvat, both overall and per minute. The difference in their performance is larger than would be explained away just by the difference in usage. A scout's eye might help identify skills that will translate to NHL success, but it seems clear that Domi had the superior season this year.

Let's use a table to look at some CHL players who might be first round picks. The chart below gives their estimated ice time, their estimated points per 60 minutes played, and their quality of competition rank among the top 12 forwards on their team (with 1 meaning they faced the strongest opponents and 12 meaning the weakest).

It's not hard to see why Nathan MacKinnon is a premium prospect -- at a young age, he's being trusted with heavy minutes, taking on top competition, and scoring at a very strong rate. And while Nicolas Petan is undersized and doesn't have a long track record of performance, he had an extremely impressive '12-13 season.

Edit: By popular request, here is some data on defensemen: their ice time and their rank within their team in how strong the opposing forwards were.