We know playing with discipline and being a pest can have value, but can we estimate how much?

A lot of the non-traditional stats that have been developed in recent years are simple attempts to quantify and track things that most people intuitively understand should be important. I don't think anyone argues that it doesn't matter what quality of competition a player faces or how much ice time he gets; the debate about the value of stats is (or should be) about how well the stats capture those things and not whether they are worth capturing.

In this article, let's highlight another aspect of the game that the stats can capture. We all understand that a pest can provide value by drawing penalties, and that an undisciplined player can hurt his team by taking penalties.

We can calculate how often those things happen, since the NHL's play by play lists the player who took the penalty and (if there is one) the player who drew the penalty. Behind The Net tabulates the data -- it strips out coincidental, offsetting penalties and just lists the frequency with which a player put his team shorthanded.

Let's sum up the results over the last six years and look at the players who have drawn the most penalties when they were on the ice (minimum 82 games):

With power play conversion hovering at around 18%, the penalties drawn by guys like Brown, Skinner, and Kadri have added something like 8 goals per year to their team's total. That's a sizable benefit, worth 2-3 points in the standings, and we might guess that Carcillo or Rinaldo could draw a similar number of penalties if given similar ice time.

Of course, we Flyer fans know all too well that this might exaggerate their value, that some of these players give back as much as they take. Let's add some columns to the previous table:

We can see that the simple penalty-drawing totals were misleading, that there is a sharp difference between Kaleta and Rinaldo in the net value of their scrapping. A style of play that leads to lots of penalties both for and against doesn't add much net value, but a player who can lure his opponents into mistakes can have a significant hidden contribution.

Before we go further, we should make sure this is a repeatable talent. There aren't all that many penalties called in a year, and so variance will inevitably play a role. Kaleta may still be a positive player, but he hasn't sustained the extraordinary ninja-like rate he had in the first three years of our data.

The split-half correlation (comparing odd years to even years) is 0.69 for players with at least 82 games played and 0.77 for players with at least 164 games. So we should expect some variance and regress the numbers a bit -- especially for players with relatively few minutes (Kaleta had 146 games at 8 minutes per game at the time of that writing). But given a sufficient sample size, there is no question that this reflects a real talent that players possess.

Dustin Brown's penalty differential alone is worth two points a year in the standings, an enormous benefit for an individual contribution that goes largely unnoticed. Players like Skinner, Kadri, and Kaleta have had similar results thus far in their limited ice time; they might not continue at quite that rate, but penalty drawing is undoubtedly a significant sliver of their value.

So we need to adjust our assessments slightly -- Carcillo's +0.2 penalty differential sounds like a positive, but is actually right in line with the average forward.

In general, penalty differential for forwards correlates reasonably strongly with skill. I would have guessed that this was mostly on the penalty drawing side, that you're a lot more likely to find yourself caught out of position and grabbing onto Sidney Crosby than Max Talbot. However, the plot below shows that there is very little relationship between a forward's ice time and penalty-drawing rate: 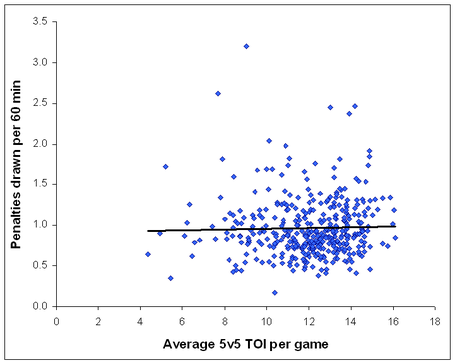 The correlation with ice time is almost entirely on the penalty taking side: 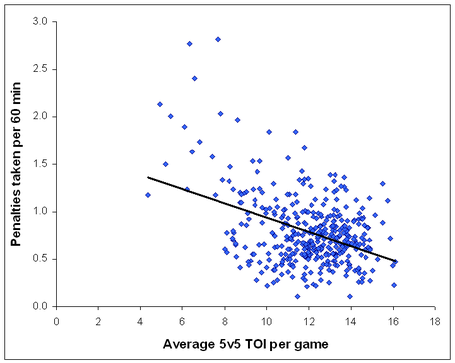 The biggest factor is from the goons who can't stay out of the penalty box, but there is a weak-but-real correlation between ice time and penalty differential, as shown below: 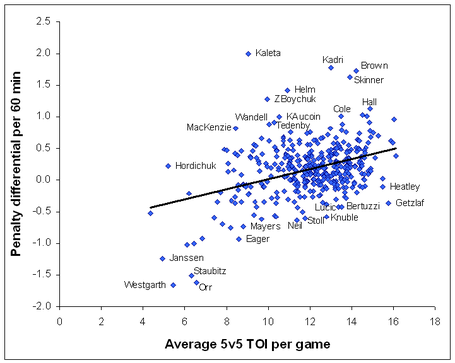 Aside from his penalty killing or whatever else they might bring to the table, just the difference in the ability to draw penalties without taking them makes Darren Helm worth ~5-6 goals per year (1-2 points in the standings) more than Chris Neil.

We can plot things differently to separate those who draw a lot of penalties from those who achieve the same differential merely by taking few of them (with the grey line indicating an average forward's differential): 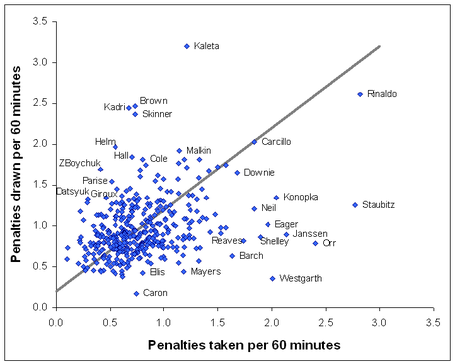 Kaleta and Helm achieve their strong penalty differentials by very different means -- Kaleta draws penalties while Helm avoids taking them. The same pattern can be seen with Giroux and Malkin, or among negative players we can see that Jamal Mayers' complete inability to draw penalties leaves him with a differential just as poor as Zenon Konopka's.

Defensemen also show repeatable talent for taking and drawing penalties, although their differentials are driven most strongly by penalties taken. At one extreme, players like Jared Spurgeon, Chris Tanev, and Brian Campbell only take a penalty ever 15-20 games. Before we consider the other things they do on the ice, that gives them a boost in value of ~4-5 goals per year over players who take a penalty every three games or so like John Erskine, Theo Peckham, Joni Pitkanen, and Shane O'Brien. 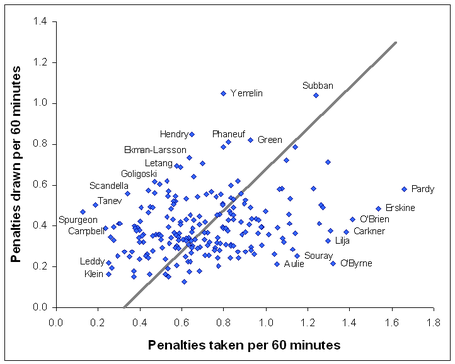 But penalties are a significant component of a player's value, to a larger extent than is generally appreciated. And capturing, quantifying, and exploiting those things that may be generally understood but are not fully appreciated is exactly how smart organizations get an edge.