Share All sharing options for: Help us pick our new site tagline

Just realized today that our site tagline is still "Right now, we're very into the universe." We don't miss Ilya Bryzgalov enough to go into the new season with that same tagline, so we need to change it. Help us? 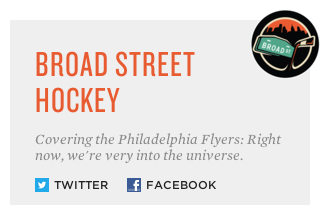 @BroadStHockey We got Cooters!

@BroadStHockey If you can't beat us on the ice, beat us off!

@BroadStHockey The house of worship of Orange Jesus

@BroadStHockey "Cap Management is for Losers" (Funnily enough, PHI's sit. not as bad as many believe though...Still funny.

@BroadStHockey "more knowledgable about the salary cap than we ever cared to be."

And my personal favorite ...

Does it matter that it's already been used? Not sure.

Give us your suggestions in the comments. We'll round up the best ones in the next few days and put up a poll.