The ups and downs of the Flyers schedule

Share All sharing options for: The ups and downs of the Flyers schedule

A few months ago, Tyler Dellow posted an interesting look at the impact of rest on a game's outcome. He showed that the home team can be anywhere from an underdog to a 3:2 favorite depending on how long it'd been since each team played.

Let's use that study to analyze this year's schedule. (With one modification: since he didn't have enough games to get reliable numbers outside of the categories with 0-2 days rest, I've collapsed everything over two down to a 2+ category.)

Just based on how rest is distributed, the Flyers have the fifth-toughest schedule in the league. That's the bad news.

The good news is that it doesn't really matter much. Their schedule is expected to cost them less than 0.2 wins compared to the average team. Only San Jose (with the most beneficial distribution of rest) has even one full point of advantage over the Flyers.

So take all of this with the appropriate level of light-heartedness. The league does a pretty good job of evening things out, and the benefits an easy schedule might bring are pretty close to irrelevant over the course of a season.

They get a slight edge on the Islanders (2.07 expected wins out of 4 games) thanks to twice catching them on the second half of a back-to-back. They have an edge on the Capitals (2.54 out of 5) because they have an extra home game. The schedule hurts them against the other five teams -- most notably giving them 2.36 wins out of 5 against Pittsburgh because the Penguins get the extra home game and twice catch the Flyers on the second half of a back to back. (The other four: Blue Jackets 1.98 out of 4, Rangers 1.97 out of 4, Devils 1.94 out of 4, and Hurricanes 1.90 out of 4.)

Finally, we can take a look at what parts of the schedule will help or hurt the team. In this plot, there is a blue dot for each game, showing the Flyers' chances of winning (based just on how much rest each team had and who the home team is). The dark blue line is a moving average showing the season's ups and downs. The red line is a cumulative score for the season to date. 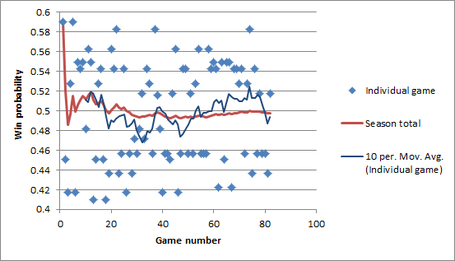 The Flyers have a favorable schedule early (worth about a half point over the first 12 games), then have a long tough stretch that costs them about a point, and then make up most of the ground gradually over their last 35 games.

None of this takes into account travel miles; the chart Dellow created gives the average home/road splits, and putting in the actual miles might adjust things a fraction one way or the other. But the truth of it is that while it's fun to dissect the advantages and disadvantages, over the course of a season the schedule won't be more than a tiny factor. If the Flyers miss the playoffs, it'll be because they didn't play well, not because of the fraction of a point their tough schedule cost them.