Simon Gagne will re-sign with the Flyers, according to a report, and his addition makes the forward unit look fantastic.

Share All sharing options for: Simon Gagne to re-sign with Flyers, make forward corps look fantastic (Update: Or not)

Update: Not as clear now that Gagne will sign. Still seems possible, but not sure. Click here for more details on what the roster could look like going forward.

Simon Gagne will be back with the Flyers next season, according to CSN.

Flyers have agreed on MONEY with Simon Gagne. Contract not done I am told

The Flyers have one hole left up front without Gagne -- a third line winger -- and No. 12 fills it absolutely perfectly. He's a perfect two-way guy to play on the third line, presumably with Sean Couturier at center and Matt Read at wing. That's a unit that can be dangerous at both ends of the ice. 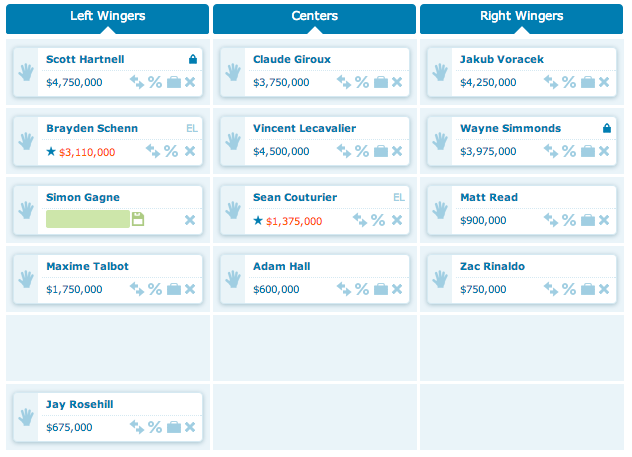 The money is going to be the caveat here as always, but it shouldn't matter too much. The Flyers are in a position right now where they'd need to get rid of somebody just to fit Tye McGinn or Jason Akeson in that hole, and Gagne likely won't cost more than $3 million. Hell, the Flyers probably could've landed him for under $2 million.

We'll have to wait and see, but this does likely mean that somebody from the still jam-packed blueline is gone. Andrej Meszaros makes $4 million against the cap and still makes the most sense.