Examining the offensive habits of the Flyers' puck-moving defensemen

The Flyers are in position to have three (hopefully) good puck-movers -- Kimmo Timonen, Mark Streit, and Erik Gustafsson -- inhabiting their blue line this season. How can we expect them to contribute offensively?

Share All sharing options for: Examining the offensive habits of the Flyers' puck-moving defensemen

Anyone who watched a Flyers game last year could tell you that the team was having some problems with its blueline. But those problems weren't only present when the other team had the puck and was attacking the Flyers' net -- they were also pretty evident in the team's efforts to start the offense up-ice and try and get the puck moving from the Flyers' end to the other team's end.

After missing out on Ryan Suter and letting Matt Carle walk to Tampa Bay, the lack of a puck-moving** type of defenseman beyond the aging Kimmo Timonen definitely led to a lot of blueline struggles on the 2013 version of the Flyers. It led to guys being forced into offense-initiating roles that didn't really fit their style -- in particular, Braydon Coburn's down year was a byproduct of this.

** Disclaimer: I hate the term "puck-moving defenseman". Isn't "moving the puck", like, the point of hockey? Isn't that what every skater on the ice tries to do? That said, it's a term that's commonly used and most people know what it generally means -- a mobile, offensively-oriented defenseman -- so we'll go with it, and will use it a lot in this piece.

The guys in charge of the team obviously noticed this; otherwise they wouldn't have spent $21 million on a really old puck-mover in Mark Streit. But between him and Timonen -- and Erik Gustafsson, who figures to be more prominent on the blueline after improving and receiving an elevated role in the second half of the season -- the team should be better as a whole at getting its defensemen to move the puck up-ice and into the other team's zone.

But none of that even addresses the fact that the Flyers were 24th in the league in points from their defensemen in the 2013 season. And you can figure that the same kinds of abilities that lead to moving the puck and getting it up-ice generally lead to goals for your team.

So while I can't go through and break down every time the Flyers' puck-moving defensemen moved the puck up-ice this year, we can look at the sample of points they scored this year to at least get an idea of how they were helping their teams produce offensively.

The following three charts are all of the on-ice locations for every non-empty net point scored by the Flyers' three top puck-moving defensemen this past season. A green circle signifies a goal -- where the player was standing when he shot the puck on net. An orange circle represents an assist -- where he was standing when he passed the puck that ultimately led to a goal for his team and an assist on the stat sheet.

For Streit and Timonen, I've divided their points into two diagrams, one with even-strength points and the other with power-play points (with a 6-on-5 point included for Timonen as well). For Gustafsson, who only scored seven points this year, I combined them on one graph and noted which one was the lone power-play tally.

Also, for uniformity's sake, all of these are moving from left to right, meaning that any circles on the left side of the diagram were initiated from the Flyers' side of the ice and any from the right side were in the other team's end.

It's not a ton of data points -- 32 for Streit (including playoffs), 27 for Timonen, and seven for Gustafsson -- but let's see what we can tell. (Click to enlarge. Original source of the hockey rink diagram here.) 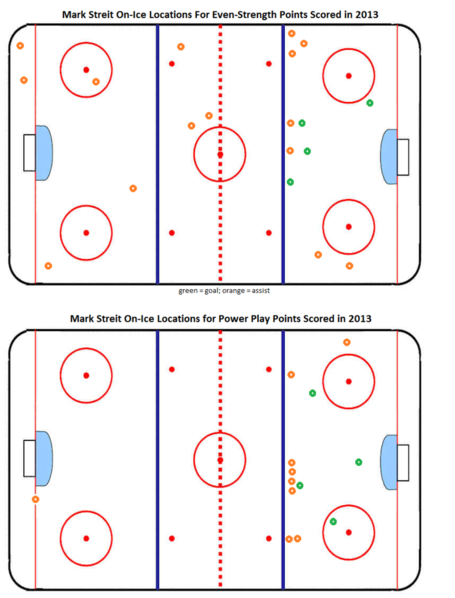 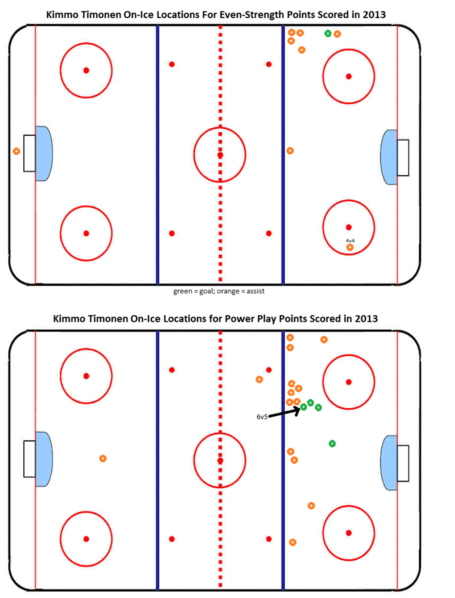 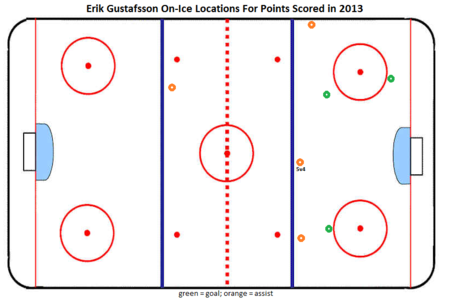 Some notes and observations:

* Obviously, not every goal or assist is equal. For all of these guys, those points were a combination of ones that required genuine offensive skill and playmaking and others that were a byproduct of dumb luck. If you'd like to get a better idea of which was which, I've included a table for all three players that gives a link to the video of each one, along with a brief summary of the player's actions on that goal. Those are at the very bottom of this post, viewable by clicking the buttons with each of their respective names.

* That said, even with the limited sample, you can clearly see some patterns. Mark Streit recorded nine assists off of passes from outside of the offensive zone (including eight at even strength), and even though certainly not all of those were great breakout passes that sprung his team and some of them were lucky bounces like clearing attempts up-ice, there's at the very least something to be said about the ability to get the puck out of your zone and move it forward to your team's forwards, which Streit can obviously still do. A handful of them involved him jumping up in the rush or carrying the puck across the blueline himself, which isn't something you'll see that often from a Flyers defenseman nowadays. Definitely something that was missing from the Flyers last season, and something that they'll appreciate having this year.

* As for Timonen, a large majority of his points this season came with him passing the puck from that left-side corner of the zone near the blue line, and you can also see that he did the brunt of his damage on the power play (to the tune of the third-most power play points in the league last year). So while Streit was the kind of guy who will try and get offense going by moving the puck up himself, Timonen was the one who carved up the offensive zone with precision and great passing once the team had established control there. Two different styles, albeit two useful ones. (This also makes it fairly obvious that Timonen should -- and likely will -- remain as the lone defenseman on the top power play unit, which was highly successful for most of last season.)

* I don't want to draw too many conclusions off of seven points from Gustafsson, because that's not enough to make any sort of concrete judgment about his abilities or tendencies. But those dots indicate that he's not someone who's afraid to step into the rush or go deep in the offensive zone to try and create offensive opportunities for his team. And though I didn't graph them, some of his points from the 2011-12 season indicate a similar willingness to jump up into the offense to try and get things going. The videos indicate he's clearly got some offensive touch as well, so that's good to see.

* So overall it looks like among the three puck-movers we've got a true puck-mover of sorts who advances it up ice (Streit), a guy who handles the puck quite well once the team has already got the puck in the zone (Timonen), and (maybe) the offensive risk-taker who can make things happen when he has the puck (Gustafsson). With the addition of Streit and a full season of Gustafsson, the team could and likely will see more up-ice mobility from its blue line than it did last year, which should help the club out in all three zones of the ice.

Appendix: Tables! Click each button for a table detailing every one of the respective player's on-ice points this season, along with a brief description of what they did on the play and a video link to the goal in question. Click the button again to collapse the table.