What can we learn from Flyers' shot distances?

How far away from the net were the Flyers when they shot the puck at even strength in 2013?

Share All sharing options for: What can we learn from Flyers' shot distances?

Official shot distance is a kind of sketchy thing in the NHL. It's recorded by the home scorekeeper, and given in the NHL's play-by-play game logs, but it's far from an exact science.

With a single guy sitting up in the press box staring down on ice, making snap decisions about how far away (measured in an exact number of feet) a player on the ice was from the goal, how can it be? And while generally speaking, guys shoot a bit better at short-range distances than they do at farther-away ones, there's always more to consider -- i.e. are guys screening the goalie in front, was there a rebound, what kind of angle are they shooting from, etc.

So it's a little bit rough, especially in a relatively small sample. But even acknowledging that, a look at shot distances by player can be interesting. So let's take a look at those for last year's Flyers.

Below is a series of graphs for most noteworthy players from last season's Flyers team, which show (at even strength) the number of shots on goal taken from different distances. They also show how many of those shots ended up in the back of the net and how many of them were saved. Fairly simple.

Some notes to consider before diving in: 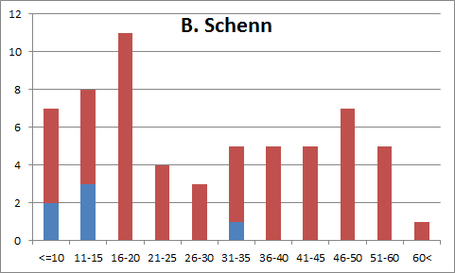 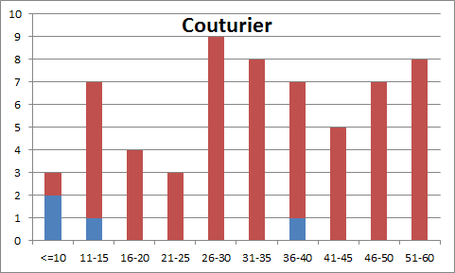 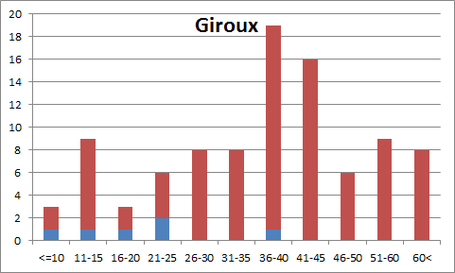 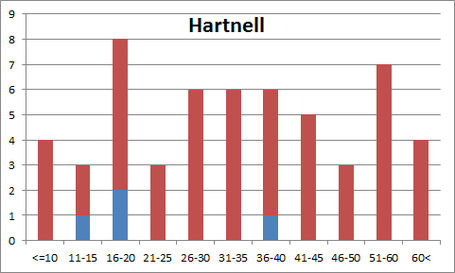 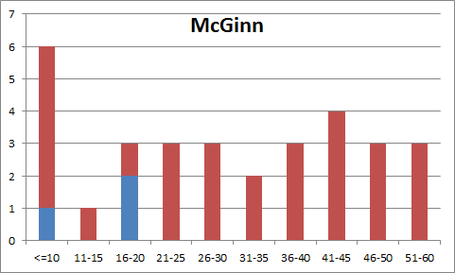 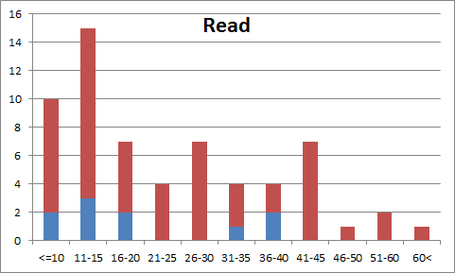 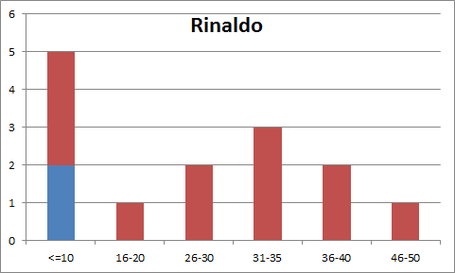 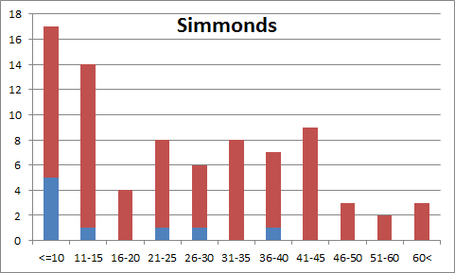 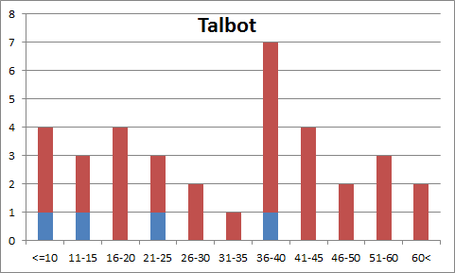 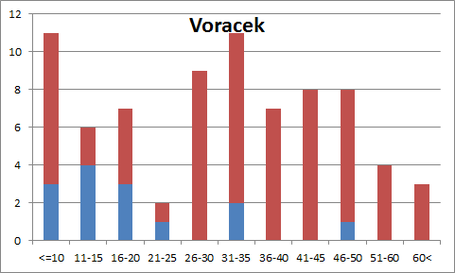 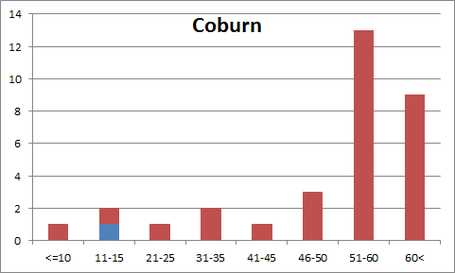 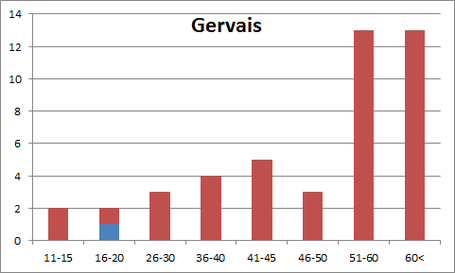 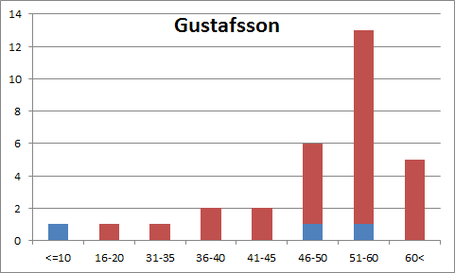 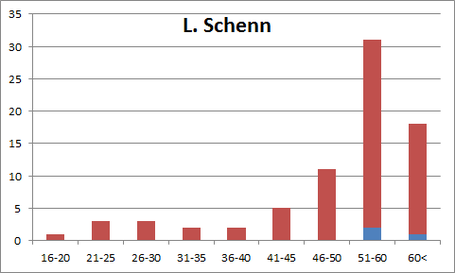 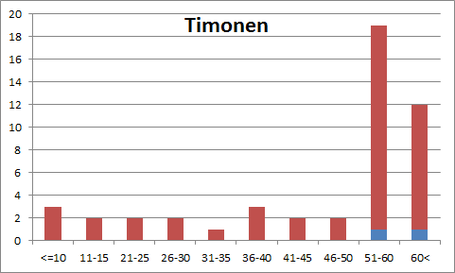 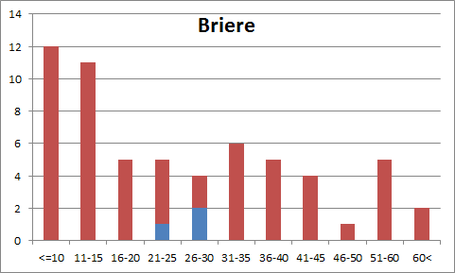 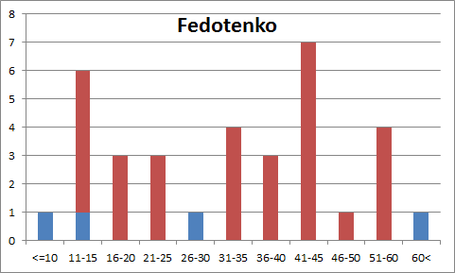 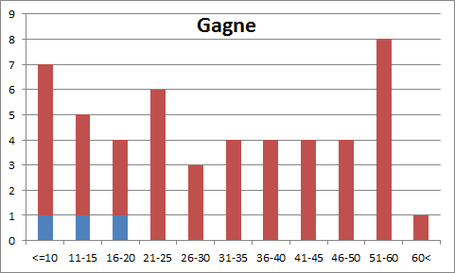 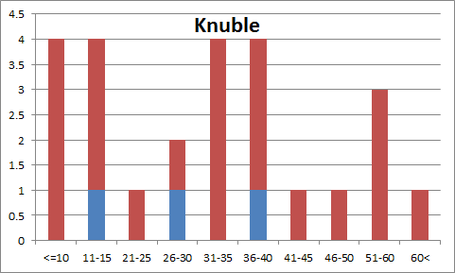 There's a lot to possibly take away from those graphs, but here were a few in particular that stuck out to me:

* Two things are pretty immediately evident and fairly obvious: (a.) there are more blue segments (representing goals) at closer distances as opposed to farther ones, and (b.) there are fairly even distributions across distances for forwards, while the large majority of shots by defensemen were far away -- typically 45 feet or more from the net.

* In a revelation that's probably not too surprising, the Flyer who might be the best at getting shots close to the net is Wayne Simmonds. 31 of his 72 even-strength shots on goal last year came within 15 feet of the net (and six of them went for goals). Simmonds has developed into a very strong netfront player in his two years with the Flyers, and if that ability is helping him get closer, higher-percentage shots, he could be turning into a real good power forward in this league.

* Matt Read was another one who seemed to be quite good at sneaking in close to the net on his shots, tallying 25 of his 62 shots on goal (and five of his 10 goals) from within 15 feet. He's got some good speed, but he isn't the type of player who strikes you as a guy who plays a game very close to the net, so seeing what he's doing here is pretty interesting and a pleasant surprise.

* Another potential surprise here is how far away from the net Claude Giroux apparently is when he's taking shots on goal. Of his 95 shots, 59 of them came from 36 or more feet away from the net. It definitely makes sense at least to an extent -- during Giroux's ascendance over the last three seasons, he's always been the main passer on his line, and has been paired with some good wingers who've been the shooters (Jeff Carter, Scott Hartnell, Jaromir Jagr, Jakub Voracek). So getting into high-percentage shooting/scoring chance areas on his own isn't typically his priority. Still, for someone with Giroux's incredible hockey talent, you'd maybe have guessed he'd be a little closer in when he's the one pulling the trigger.

* The defensemen who tallied the most shots on goal within 45 feet last year for the Flyers were ... Bruno Gervais and Luke Schenn, with 16 each. Raise your hand if you saw that one coming. By defensemen standards, the Elder Schenn actually put a ton of shots on net last year (76), though only three of them made it in the net -- including one empty-netter. He even outpaced Kimmo Timonen in that regard, though we know that, offensively, Timonen's forte is his passing and his power-play ability.

* Danny Briere's ability to create offensive opportunities by himself has diminished over the past few years and the Flyers were absolutely right to buy him out, but even acknowledging that, he had some pretty crazy bad luck last year. Briere took 28 shots from within 20 feet last year at even strength and not a single one of them went for a goal. He's still got some skill to get shots near the net, and if he can recreate that kind of effort this year, he should be expected to pot at least a few of those with the bleu, blanc et rouge in Montreal.