Share All sharing options for: BSH Fantasy Hockey returns for 2013-14

The hugely popular Broad Street Hockey Fantasy Hockey League is back after a lockout-shortened year.

The shortened year presented many challenges, including some leagues drafting in September, the unpredictable and unbalanced nature of a three-month season, as well as the availability of members. As a result, it was decided that the 2012-13 season would be one for fun and experimenting, with all those invited to play in 2012-13 being invited back for 2013-14.

However, as you can imagine, there is turnover. As members decline invitations, spots open up. As of now, there are several spots available on a first-requested basis. If you wish to join, either put your email address in the comments below or email me at geoff.detweiler@gmail.com. I much prefer the comments of this thread, but either works.

Just as last year, we will have three tiers, five leagues, and 100 participants.

First, invitations are purely on a first-requested basis. Any method of delivering your email address (e.g. in this comment thread, Twitter, email, Facebook, text, Brian Boucher delivery service) to me will work just fine. Be aware that the waiting list is likely to include many more names than available slots. If you do receive an invitation, do not hesitate to accept. We want to fill the available spots as soon as possible.

Secondly, if you participated in one of the five BSH leagues last year, you have until Friday at 7 p.m. to accept the invitation to join that was sent to you over a week ago. If you have not received such an invitation but feel you should have, let me know as soon as possible. Invitations will be sent to those on the wait list Friday evening, and at that point, whoever accepts their invitation first is in, regardless of prior year's results.

There are currently 25 of you who have yet to accept your invitations, so, you know, check your spam folders or those decade old email addresses you gave to Yahoo! way back when.

Thirdly, the season starts October 1, so there is some leeway for each league to decide when they want to draft. Each league is different, with some drafting Monday night, others Sunday night.

Because we have so many people who wish to join, we instituted a three-tiered, 100 member league. Here is how the five leagues and three tiers work, visually: 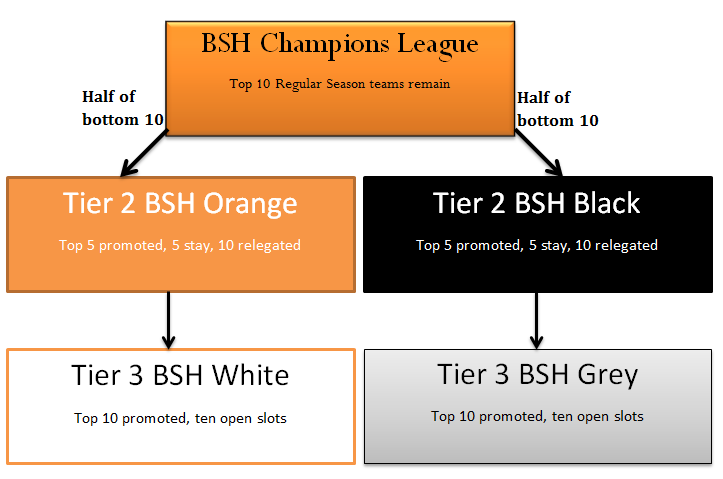 Because Kreider is busy with life, we're stuck with my year-old, Microsoft Word colored text boxes as a visual. Here is how it works:

Anyone who is a fan of the English Premier League will recognize how we have structured promotion and relegation. In order to promote competition and reward extended success, we will rely heavily on the 22-week regular season to determine the final standings.

The playoffs in all three leagues will consist of two groups of four teams. The top four teams after 22 weeks will play in one bracket while the teams ranked fifth through eighth play in a "consolation bracket".

We will utilize this consolation bracket to determine the final standings and thus the fifth and final team promoted to Champions from Tier 2. For example, in last year's Champions League Consolation bracket, The Wreckers were the 8th best team after 22 weeks and won back-to-back games: 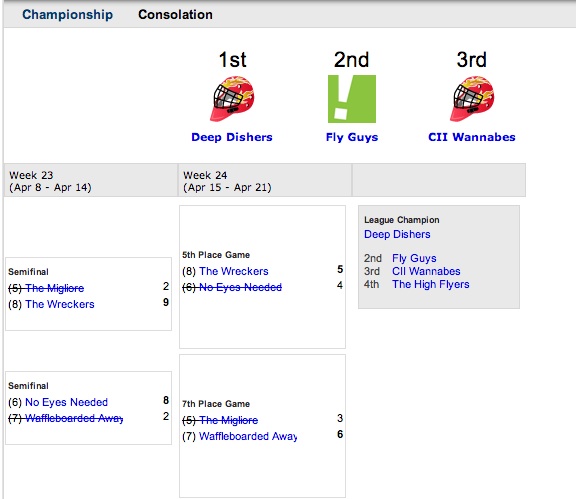 If this were Tier 2, The Wreckers would be promoted to Champions as the 5th place team. In addition, the other three teams in this bracket would be guaranteed an invite back to Tier 2.

In short, across all three Tiers, the top-10 regular season finishers are guaranteed an invitation to return to the same level or better. That should be the minimum target for all.

One of the worst aspects of fantasy hockey is the limited amount of statistics one can use as categories. Add in the size of our leagues and you get limited options that need to be carefully balanced so as to avoid disproportionate importance.

Three years ago, Yahoo!'s inability to accurately assign positions to forwards resulted in the faceoffs won category dramatically increasing the value of centermen incorrectly labeled as wingers. Two years ago, our switch to counting stats for goalies proved misguided when forcing teams to roster a minimum of two goalies.

In other words, the scoring system has not been, and probably will not be, perfect. We're always looking for ways to improve it, but this year, we are going with the following rules: 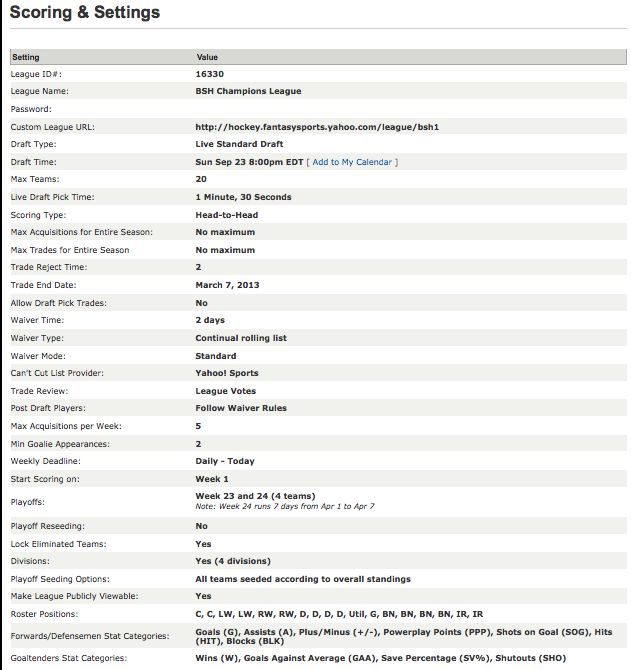 These will be the rules for all leagues. Good luck.