The Flyers host the New York Rangers on Tuesday night at the Wells Fargo Center, their fourth game in three days because the NHL preseason is weird. It will, however, be their final game for a full week as the team will presumably make some cuts and then ship up to Lake Placid for several days of team buildin' in the wilderness.

Tonight's game will be on national TV in the United States, which is obviously great news for those who haven't had a chance to watch any of the first few games. It's also on TV locally in the Delaware Valley.

It'll be Steve Mason vs. Martin Biron in net. Here are the full lineups for both teams. Excuse my shadow. 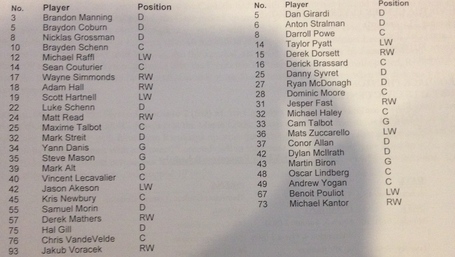