Hal Gill invited to Flyers training camp on a tryout

The big 38-year old veteran will reportedly be one of the veterans brought in to Flyers camp next week.

Share All sharing options for: Hal Gill invited to Flyers training camp on a tryout

With training camp coming up next week, teams are slowly starting to fill out some spots in their camp lineups with veterans out in free agency who are still without contracts. The idea of the Flyers bringing on Simon Gagne in that role until they have room to sign him has been thrown around, and Assistant GM Ron Hextall said, per Dave Isaac of the Courier-Post, that there are more potential guys out there and the Flyers have "kicked their names around".

One of those guys will get an invite: veteran defenseman Hal Gill. As reported on Saturday afternoon by the Boston Globe's Fluto Shinzawa:

(Update: the signing has been confirmed by the Flyers.)

Gill is 38, and has played 15 seasons in the NHL with five different teams. He's definitely a stay-at-home type, as he's coming off of a year with the Nashville Predators where he posted no points in 32 games while playing 13:23 per game. He's very big, at 6'7" and 240 pounds.

Truthfully, it's hard to imagine Gill sticking full-time with the team. For one, his play seems to have fallen off in the last few years, based on the fact that his ice time has decreased over each of the last four seasons with the Preds and Canadiens. He likely won't be much more than a third-pairing, stay-at-home type no matter where he is.

And on top of that, as we've talked about a bit, the last thing the Flyers need given their current situation is another third-pairing defenseman. There's already a logjam of players on one-way contracts (image below via CapGeek) ... 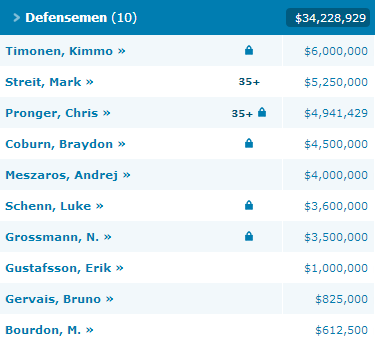 ... to the point where at least two of them, maybe more, are almost certainly going to have to be traded or waived or demoted. If Gill makes the team and gets an NHL contract, it'll likely further complicate that mess.

So the purpose of this move is a bit unclear, and apparently we're not the only ones who think that:

All of that said, though, there's really no risk in bringing the guy in for training camp. If they don't see something they really like, they'll let him go. So it's hard to get too worked up about it. We'll see.