The Flyers are not as good as their win streak led us to believe.

Hopes were high entering this weekend's set of games vs. Tampa Bay and the New York Rangers.

The Flyers had catapulted up in the standings after a 5-1 western road trip and a decisive win against a playoff-caliber Montreal Canadiens team, and the general feeling was that the Flyers would take two tough tests from the Lightning and Rangers in stride. Sure, Tampa Bay is near the top of the Atlantic Division and the Rangers have been surging, but the Flyers had turned the corner after their early-season struggles and were showing their moxie as a playoff contender.

Well, the weekend didn't exactly go according to plan. The Rangers smoked the Flyers on Sunday night at Madison Square Garden in a game that was never close, and despite a strong offensive effort on Saturday, the Lightning picked apart both an ugly defensive effort and a pitiful performance from Steve Mason en route to a big win on Saturday.

Is it possible that this was destined? That the Flyers really haven't been good lately, despite getting the results on the scoreboard? That the team we saw on Saturday and Sunday might be closer to the Flyers true talent?

Yes, that is entirely possible.

The Flyers may have won five of six on their road trip, but they were routinely outshot on that trip. If we're talking just plain old shots on goal, the Flyers were outshot in all but one of the games -- the 4-3 shootout win over the Edmonton Oilers on Dec. 28. (The Oilers are the worst team in the Western Conference.)

Looking at total shot attempts at even strength in situations where the score was close (here's why, FYI), the Flyers came out on top just twice on the trip -- the Oilers game, and the 4-1 win over the second-worst team in the West, the Calgary Flames. Things have been particularly ugly since the Calgary game and bottomed out against the Devils, as you can see below in chart form. Above 50 percent is good, below 50 percent is bad. There's a lot of bad here. 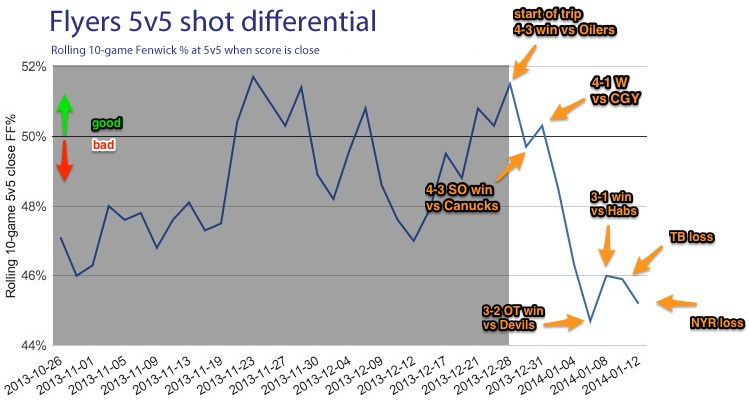 They lost the shot battle in every other game on the trip, yet still found ways to win games. How'd they do that?

While all of these high points are nice, it's pretty clear they weren't going to keep up. The team as a whole was shooting much hotter than usual, but like with any hot or cold stretch, those sorts of things tend to bounce back eventually. The same goes with higher-than-usual save percentage, as it does with better-than-usual special teams success.

The Flyers didn't miraculously turn into an 11 percent shooting team -- which would have made them more dangerous than Chicago and Pittsburgh, by the way -- nor did they suddenly become better at keeping the puck out of the net than every team besides Boston and Los Angeles.

I don't think the Flyers are quite as bad as they were in the two games this weekend. The same thing logic that applies for hot stretches like they one they've just come off of applies for cold spurts, too. They're not as bad defensively as they looked in the last two games, and again -- just look at the above chart. The shot differential is at the worst it's been all season. It won't stay that low.

Kimmo Timonen noted in the Daily News on Monday that they're really tired -- that it felt like they'd spent "eight weeks" on the road. They're a tired team, and that surely plays into how bad they looked against Tampa Bay and New York.

But those two games were certainly a wake up call. The Flyers aren't as good as they've looked in the last month, either.