Flyers prospect Anthony Stolarz leaves game after getting cut by skate in back of leg, will likely miss a few weeks

The London Knights goalie and Flyers' 2012 draft pick left a game after a gruesome incident in which he took a skate to the back of his calf, and received 55 stitches for it.

Share All sharing options for: Flyers prospect Anthony Stolarz leaves game after getting cut by skate in back of leg, will likely miss a few weeks

Scary scene on Friday night in London, Ont., where Flyers prospect Anthony Stolarz went down early in the game after suffering an apparent skate to the back of his leg in an Ontario Hockey League game between Stolarz's London Knights and the Sagniaw Spirit.

Per Ryan Pyette of the London Free Press:

The Philadelphia Flyers' prospect writhed in pain on the ice and left a lot of blood in the blue paint in front of his net.

Stolarz himself gave us all the following update from Twitter last night not too long after the incident occurred:

At the hospital now. Thank you all for the kind words. Nothing too serious and I'll be looking to get right back on the as soon as I can.

However, TSN's Bob McKenzie gave another update on Stolarz's status this morning that was a bit less optimistic:

That's not exactly good news for Stolarz or his team, of course, but given what happened it sure sounds (and looks) like things could have been a lot worse for him.

Video of the incident here. Obvious warning: there is a lot of blood in it. If that's not your thing, below is a (non-bloody) image of what certainly appears to be Locke's skate heading straight for the back of Stolarz' calf, c/o Neate Sager of Yahoo!'s Buzzing the Net: 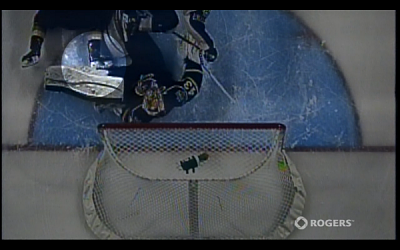 Stolarz, a second-round pick of the Flyers in the 2012 draft and the best goaltending prospect in the team's system, has had himself quite a good season. His .925 save percentage in 30 starts is good for second in the entire OHL, and he recorded a shutout in his only start as the backup for Team USA in the World Junior Championships in December and January. Hopefully his recovery goes as planned and he gets back on the ice at full strength soon.

Bill Meltzer had an interesting note this morning about the whole thing:

OHL rules require goalies to wear cut-proof leg guards (such as kevlar socks) under their uniforms. Many do not do so, citing "comfort".

(NOTE: Meltzer later clarified that the league does not "require" cut-proof guards, but that it "recommends" them.)

You'd certainly have imagine a few more goalies and maybe even skaters will make the decision to wear kevlar socks now after Stolarz's injury. We've seen things like this happen a lot in the past year to various hockey players -- from Ottawa's Erik Karlsson to Toronto's Dave Bolland to the Flyers' own Eric Wellwood -- and the more that incidents like this happen, the more players will hopefully make the choice to try and protect themselves from injuries like Stolarz's.