The Flyers re-signed goalie Steve Mason to a three-year, $12.3 million deal on Saturday. It is not a terrible contract. However, there are some problems with it, especially the timing of it.

By now, you have heard that the Flyers and goaltender Steve Mason have agreed to a three-year, $12.3 million contract extension, making it worth $4.1 million per year against the salary cap. The deal begins next season and runs through the end of the 2016-17 season, at which time Mason will be 28 and an unrestricted free agent. The deal does not include a no-trade clause, per ESPN's Pierre Lebrun.

Twitter, for most of the afternoon, was ablaze with people -- Flyers and non-Flyers fans alike -- talking a lot about the contract. Most seem to think it's a bad deal. Not all, but most.

Maybe it's just because of anchoring bias (i.e. what happened the last time the Flyers signed a goalie to a long-term contract?), but I do not find this to be a terrible deal. However, that does not mean that I think it's a good deal. Let's run through all sides of it quickly.

• In Eric's article, he tells us that (a) a player who can make his team six goals better is making them roughly one win better, (b) one win is typically worth about $3.1 million in unrestricted free agency, and (c) a replacement-level goaltender is worth about $700,000 and stops about 91.3% of the shots he faces at even strength.

• $4.31 million / $3.1 million per win = approximately 1.39 wins. If we go back to "six goals equals one win", that means the Flyers are expecting Mason to be worth about 8.34 goals more than a replacement-level goalie over the course of a full season.

So here's the first question: On its own, how much is a $4.1 million average annual value (AAV) worth to a team?

Last month when Henrik Lundqvist signed an extension with the New York Rangers, our own Eric T. worked out roughly how much more valuable he had to be than a replacement goalie to be worth that contract. It's an excellent post and you should read through it all.

If we apply roughly the same math that Eric used in that post -- and you can see exactly how in the sidebar here -- we find that this contract expects Mason to post roughly a .918 even-strength save percentage next year. That's not an overwhelming expectation -- it's actually below the current league average, which is .922 -- but it's also a figure that Mason has only topped in a full season once: his rookie year, 2008-09. He's on pace for a .923 this year. He's posted exactly a .911 in each of his other four NHL seasons.

Basically: the contract sets an expectation that's not exactly unrealistic, but it's one Mason's had trouble reaching for most of his career. Whether or not he'll improve enough to get there is something people have varying opinions on, but we'll get to that in a second.

So that's the expectation based on his theoretical market value. What about his value relative to his peers?

How Mason's deal stacks up

Below is a list of the 20 highest-paid goalies for next season, as of this very moment, courtesy of the wonderful capgeek.com: 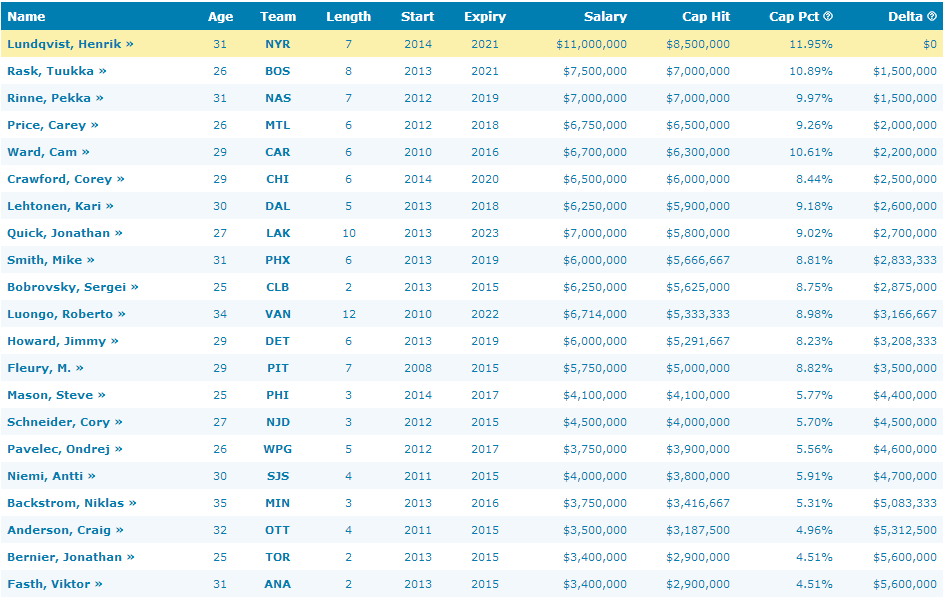 You'll see Mason there, 14th on the list. Ryan Miller, Jaroslav Halak, Jonas Hiller and James Reimer are all hitting free agency of some form this summer, so chances are that number will drop another couple of spots. In any event, the Flyers will be paying Mason as if he's roughly an average starting goalie.

Whether or not you think Steve Mason is an average starting goalie probably depends on your opinion of him.

As Eric T. reminds us, the best guess is probably his career save percentage. Goalies have lots of stretches where they play above and below their actual talent level, and usually the larger the sample size you're guessing off of, the better a guess you'll be making.

But maybe you think that Mason's overall performance in his career, including his mostly-underwhelming performance with the Blue Jackets, doesn't paint a fair picture of his actual ability. Maybe you like his work ethic and attitude and commitment to improving that he's shown here, and think that will lead to good results.

Generally speaking, I'm on the "he hasn't been good for most of his career, and he's got a ways to go to prove he can do this for a full season" side of things. But most of us probably have our minds made up on that front either way, though, and not much more I could say would push anyone in any given direction. So let's move on.

In terms of length, the deal is for three years. Of the 13 guys making more than him, 12 of them were signed to longer contracts than that. So it's a multi-year deal, which is less than ideal, but it's not a huge, massive commitment (like the last time the Flyers reacted to a small sample by overpaying for goaltending).

Mason started this year really well, as you assuredly know. His numbers for the season on the whole, even with his performance since December taken into account, are starting-goaltender-worthy. But what was the harm in waiting out the next 34 games (and hopefully more in the playoffs) to let that sample size grow a bit more? I'm not going to totally rule out the possibility that he's actually become a better goalie since he arrived here, and that he's not the loser he was in Columbus. But if that's the case, why not wait another two months just to be sure?

The Flyers had Mason's restricted free agent rights. They could match any offer that they wanted on him in the offseason (while being more confident that Mason had turned a corner). They could just negotiate with him, and leverage his status into a decent deal. Given the strength of the goalie market this offseason (see the names mentioned above), I can't help but think they could either have come up with this deal then or found an acceptable if not superior alternative. 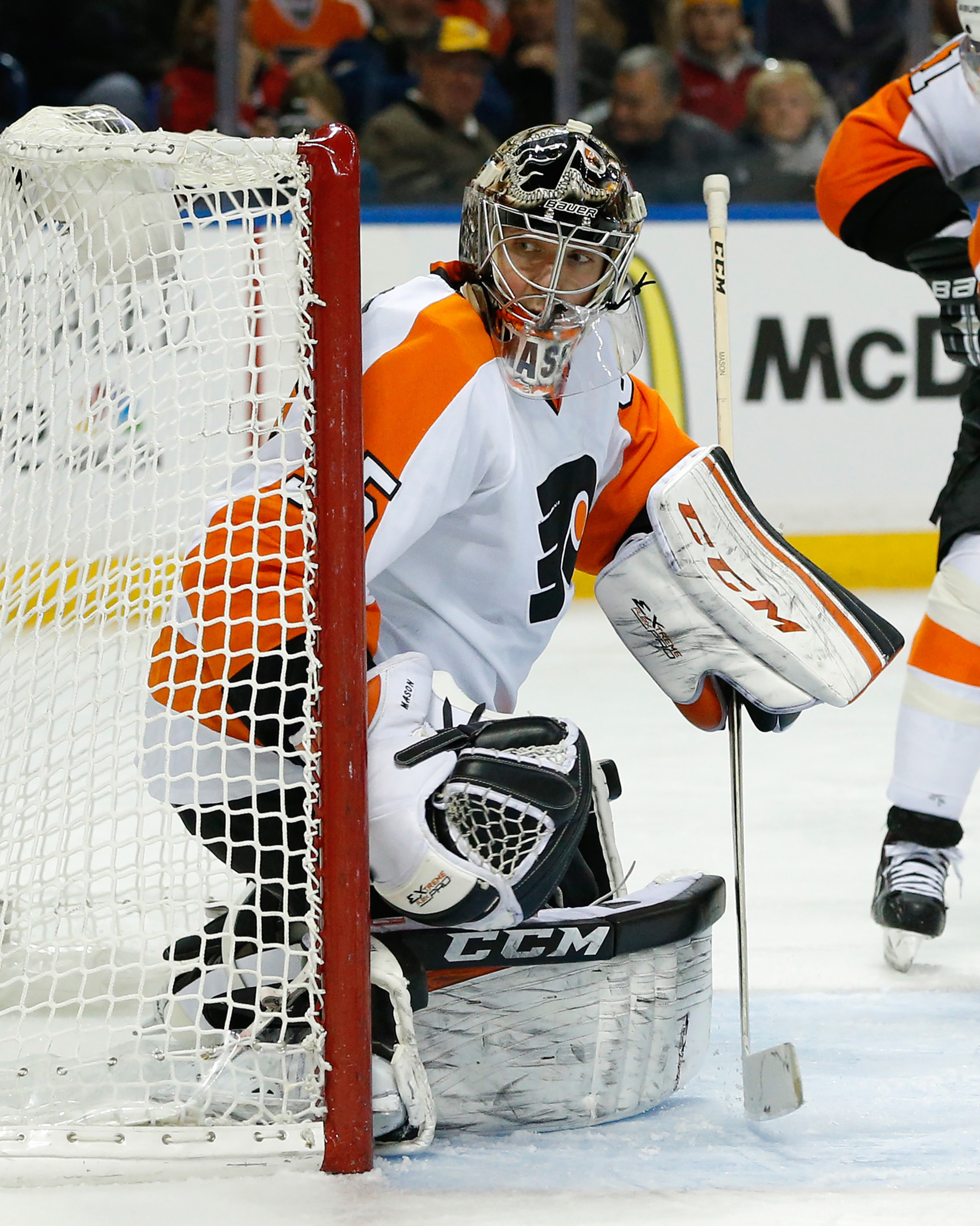 Hell, worst-case scenario, they could have gone to arbitration with Mason, at which point they could more or less say the same thing we're saying now: that Mason's career performance does not merit a contract worth a huge AAV.

It almost makes you think that the Flyers saw Mason's numbers in the last six weeks or so and thought that they would catch Mason while his stock was low, expecting him to then rebound to the level of play we saw in the season's first two months. Which is, uh, not at all how the whole "projecting goalies" thing works, but hey, it's the Flyers we're talking about here.

Yes, it's possible that Mason turns around his performance of late, plays well in the last two months and in the playoffs, and ends up asking for more than this. But I think that's a risk worth taking -- again, when Mason's career has only shown brief stretches of potential surrounded by stretches of poor play, I don't think it's unreasonable for the Flyers to ask to see that potential work out for another two months.

All in all, this isn't a catastrophe. Goalies are getting big money and/or big term in this day and age, and I was really worried that Mason was going to get one or both. Three years is manageable, and the dollar amount, while high, isn't crippling.

But it's still a pretty healthy commitment to a guy who still has a lot to prove in the NHL. It's Paul Holmgren and company making a firm statement that they think the 26 games Mason played between April 6 and November 30 of 2013 represent a skill level close to what he is actually capable of, and that they think the Mason that played poorly before and after that time is a mirage. It's very, very risky, and if they're wrong and the Mason we get moving forward is a .906 or worse goalie, the Flyers are going to need really, really good performances up and down the rest of the lineup to remain competitive.

Nine months ago, I was skeptical about this whole Steve Mason thing. He's somewhat proven me wrong, as he's been respectable on the whole since then. But I'm skeptical again that this is going to work out. I'm rooting for him to prove me wrong again, but I'm not getting my hopes up.