The Flyers' worst statistical defenseman is still getting second pairing minutes despite a disastrous January. Is it time to make a change?

Share All sharing options for: The Nicklas Grossmann problem

Desperate to shake up a struggling roster, Flyers coach Craig Berube made the decision to add Erik Gustafsson to the lineup for last Saturday's game against the Boston Bruins.

Either Andrej Meszaros or Luke Schenn seemed to be the likely casualties. So when it was announced shortly before gametime that Meszaros would face his 21st healthy scratch of the season, it was no surprise.

"Mez’s defensive play has fallen and I didn’t like his game in Columbus, so I went with [Gustafsson]," Berube stated after the benching.

It's tough to argue that Meszaros had a strong game on Thursday, although surely Nathan Horton had no complaints, as Mike Halford of Pro Hockey Talk noted. And Gustafsson's speed and puck moving ability are a welcome addition to the defense.

But was Meszaros really the ideal player to remove from the lineup? Could there be another, bigger liability receiving significantly more ice time?

Grossmann and the defensive zone

Nicklas Grossmann has many fans among many Philadelphia fans and journalists alike. Sam Carchidi in late December even called him the Flyers' best defenseman to that point in the season.

Via the eye test, Grossmann can appear to be the Flyers' best pure defensive defenseman. To start, the Swedish blueliner generally avoids the egregious positioning errors that plague the Flyers at times. He is always among the team leaders in blocked shots. He plays physical without taking himself out of the play, unlike his sometimes overaggressive teammate, Luke Schenn. And overall, he seems to have a calm, controlled demeanor in the defensive end.

But maybe Grossmann gets a bit too comfortable in the defensive zone. After all, he's by far the worst Flyers defenseman at escaping it.

Thanks to the work of Pierce Cuneen (@pcuneen19) and @2_for_slashing, defensive zone exits have been tracked for each Philadelphia Flyers game. Total exit attempts, successful exit percentage, and successful exits with possession have all been recorded.

The numbers are not flattering to Grossmann.

He ranks last among Flyers defensemen with a successful defensive zone exit percentage of 66.8 percent. So for every three chances that Grossmann has to clear the puck out of the defensive zone, he fails to do so at least once.

It gets even worse when it comes to zone exits with possession. Only 31.1 percent of Grossmann's zone exit attempts leave the defensive end successfully and also see the Flyers retain possession of the puck past the blue line.

That's by far the worst on the team -- a full eight percentage points worse than any other Flyer. A majority of his "successful" zone exits lead to results such as misfired passes, harmless neutral zone clearing attempts that go right back to the opposition, or icings.

Grossmann may make fewer obvious mistakes in his own end than other defensemen (debatable, but possible). But when his inability to clear the zone results in extended cycles and repeated opponent possessions, shots and chances continue to add up. Eventually, some of those constant chances are bound to become goals.

And because they rarely leave the defensive zone with Grossmann on the ice, the Flyers are not scoring enough goals to compensate for the high goals against totals.

Grossmann might be an impressive defensive defenseman to watch. But there can indeed be too much of a good thing.

Even ardent defenders of the Swedish defenseman have conceded that he is not exactly having a stellar month of January.

Repeated minor penalties, blown defensive assignments, and worst of all, numerous goals against has even the most anti-stat fans frustrated with Grossmann. 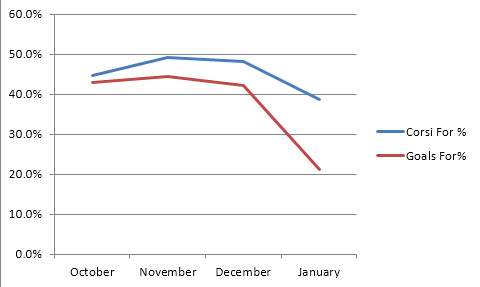 Not surprisingly, the numbers match with the eyes in this case.

Grossmann's numbers truly have fallen off a cliff in January. His possession statistics are below the 40 percent mark, a level reserved for the Colton Orrs and Luke Gazdics of the NHL.

He's even worse when evaluated by the most basic of stats: goals. In January, Grossmann has been on the ice for four Philadelphia goals, and a whopping 15 goals by the opposition.

It's notable, however, that even in Grossmann's strongest months of the season, he failed to post a Corsi over 50 percent or a goal differential rate over 45 percent.

January has been a trainwreck for the 29-year old defenseman, but his play was below-average even before his recent swoon.

Grossmann's poor statistics, in other words, can not simply be explained away by a few bad weeks.

Dragging his teammates down

Throughout the course of this season, Nicklas Grossmann has received 5v5 ice time with each regular member of the defense. As a result, we can measure how he has performed with every defensive partner.

Unfortunately, it appears that Grossmann's presence lowers the efficiency of the entire Flyers defense.

Not one defenseman is better from a possession standpoint when playing with Nicklas Grossmann. Five of the six Flyers blueliners are positive possession players overall when away from Grossmann.

Mark Streit, who has been saddled with him on his pairing more than any other defenseman, actually has solid second pairing-worthy statistics when freed of Grossmann. In addition to his decent Corsi, his goals-for percentage sans Grossmann is a strong 56.7 percentage.

Sean Couturier's statistics with and without Grossmann are even more eye-popping.

In the 304:58 5v5 minutes he has spent with Grossmann this season, his Corsi For is 41.8 percent, worse than Zac Rinaldo's current full-season percentage. But in the 401:16 5v5 minutes away from Grossmann, Couturier's possession numbers jump to 55.9 percent, a level which would surpass even Jakub Voracek.

Berube seems to use Grossmann's pairing with the Couturier line in shutdown situations, such as tough defensive zone draws, which along with score effects, would help explain the poor statistics to an extent. But starting in the defensive end also forces Grossmann to generate more of the very same zone exits that he has struggled with so much this season.

Not every player has such a dramatic split. But up and down the lineup, almost every Flyer has been better from both a possession standpoint and a goals standpoint when away from Nicklas Grossmann.

In the end, Grossmann's role will be decided by Craig Berube. And Berube appears to be a definite Grossmann fan.

After all, Grossmann remains third on the team in average 5v5 minutes per game. His January swoon has not caused a dramatic decline in his overall ice time -- this month, he has averaged a little less than 16:00 minutes of even strength time per game.

Players like Erik Gustafsson, Andrej Meszaros, and even Luke Schenn have all been scratched at least once this season. None has statistics as poor as those posted by Grossmann.

But not only has Grossmann's name never been mentioned by team insiders as a potential scratch, he has not even been removed from the second pairing despite his horrific January.

It's past time to consider both options.