Flyers at Avalanche recap: Win streak comes to an end in a weird loss

Injuries stacking up, failure to convert on some solid chances, and some excellent goaltending from Semyon Varlamov led to the Flyers' win streak coming to an end.

Share All sharing options for: Flyers at Avalanche recap: Win streak comes to an end in a weird loss

It's not to say that this was a game the Flyers dominated for the duration of and only lost because of a white-hot goalie or something. They didn't, even though Semyon Varlamov was fantastic and was definitely the Avs' best player. The Avs probably got the better of the play tonight, and you kind of wish that you'd see a better performance from the Flyers.

But with Matt Read missing the game with an "upper-body injury", and with Michael Raffl being taken out in the first period with a concussion suffered on a high hit by Gabriel Landeskog, it kind of seemed like this was an uphill battle from the start. Craig Berube had to basically just throw his players on the ice three at a time, and it seemed like the fact that they were within a few really close chances late in the game of tying it was a testament to the fact that they were fighting throughout this one to get back in it.

The head coach agreed with that sentiment as well:

Berube was happy with #Flyers' effort; they were without two key forwards (Read, Raffl): "The effort was there. There were no passengers."

(This, for comparison, coming from the guy who ripped the Flyers after their win against Vancouver on Monday.)

I try not to be too easy on this team after losses, but it seemed from the start like it wasn't gonna be their night. It wasn't. And they were still close. Good on 'em, I guess. They're on a tough road trip against the Western Conference (in the altitute tonight!) and they aren't gonna win 'em all.

* So as mentioned above, the lines for the game got a little bit ridiculous after Raffl was taken out. With Read already out, and with the team's three fourth-liners (Zac Rinaldo, Adam Hall, and Jay Rosehill) never ones to get a ton of ice time anyways ... the Flyers were basically cycling seven, eight, nine forwards around the three different forward spots as they pleased. Here was every combination that had been on the ice for at least one 5-on-5 event (i.e. shot attempt, faceoff, hit, giveaway, etc.) through the end of the second period, in order:

There were 32 of them. And that's just through two periods. That's not to say Berube actively called for 32 different line combinations -- some of them were likely only on the ice for a few seconds and one event -- and that's not to say this was all Berube's fault, because this was clearly a tough situation. But in any event, it's pretty clear that the line blender was on full purée mode after Raffl headed to the quiet room.

* Hopefully Raffl's injury, by the way, isn't serious. I'm not optimistic -- the fact that the team went right out and called it a "concussion" rather than just a "head injury" or an "upper-body injury" doesn't seem like a good sign -- but he's added some speed and hockey smarts to this team's top-6 and it's clear that this team sees him as a key moving forward. Here's hoping the team handles his injury with the proper care and that, ultimately, his concussion doesn't have him sidelines too long.

* Steve Mason will get the loss -- his first regulation loss in nearly a month -- and the game-winning goal for Colorado by Ryan O'Reilly was one he'd probably like another crack at, as it came from a weird angle and snuck by Mason after he initially got a piece of it. That said, he ended the night with 29 saves on 31 shots, and he made some nice saves in all three periods to keep the game within striking distance. Shame that he would end up getting the loss -- he had a nice game overall. Just got outplayed by the other guy. (Varlamov, as mentioned earlier, was quite good tonight, making a ton of saves on good Flyers chances and ending the game as the first star.)

* The other goal the Flyers gave up was probably the lowlight of the evening. It began with an ugly turnover in the neutral zone by Sean Couturier (who had what seemed like a very uncharacteristically tough game tonight, at least in the early going), it saw multiple players (looking at you, Steve Downie) look a bit slow to get back on D on the odd-man rush that ensued for Colorado, and it ended with four different Flyers playing Four Corners around Jamie McGinn, who cleaned up the rebound from Matt Duchene's shot right in front of Mason. As such: 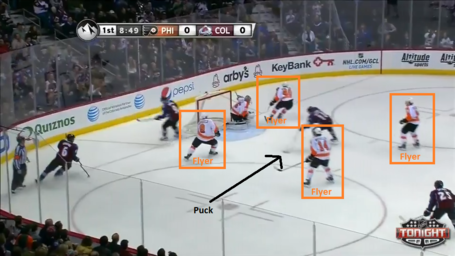 * There were definitely some chances left on the ice tonight, the most of which probably came from the combination of Scott Hartnell, Brayden Schenn, and Wayne Simmonds. Simmonds got the team's only goal (a deflection in front on a shot from Andrej Meszaros), continuing his hot play of late, and the aforementioned trio combined for 12 shots on goal and a number of near misses. Schenn played a career-high in minutes tonight (21:40), likely thanks in part to Raffl's injury, and Hartnell seemed like he was thiiiiiiiiis close to potting a goal two or three different times.

Overall, not the prettiest loss, but as mentioned above, it seemed like the deck was stacked against them here and they did what they could.