The 38-year-old Finnish defenseman is a big reason why Philadelphia's top pairing is having so much success this season. Let's take a look

Share All sharing options for: Kimmo Timonen deserving of his $6 million deal

Last week, Charlie O'Connor published an article explaining how Braydon Coburn has been able to turn his play around after a pretty bad disastrous 2013 lockout-shortened season. It's time to switch gears and acknowledge the second half of Philadelphia's best defensive pairing this season: Kimmo Timonen.

Note: All stats were gathered from Extra Skater and Hockey Analysis. Go check both of 'em out. They're saviors.

The signing came after a handful of botched attempts to strengthen the blue-line through free agency and an offer sheet in 2012 (Ryan Suter and Shea Weber), the injury to Chris Pronger and the snubbing departure of Matt Carle. Timonen was essentially the only remaining option available to address Philadelphia's need for a top-pairing defenseman. Welp..

A large portion of the vitriol aimed at the extension stemmed from the fact that Timonen was aging; it was evident that his acceleration had decreased over the course of the previous season, and some were worried that he'd have a problem keeping up with a full season of first-pairing responsibilities. Others were worried that he was about to reach the point where he'd no longer be able to play through a plethora of injuries, like he had in the past.

He couldn't possibly handle another full-season, could he? Forcing Timonen to play against tough competition would be a recipe for disaster, right?

The most efficient way of determining a defenseman's contribution to their team is to examine the amount of team shot attempts for/against while said defenseman is on the ice. Tyler Dellow put it best in his analysis back on December 5, 2013 regarding Florida's value signing of Tom Gilbert before the start of the 2013-2014 season:

It'd be foolish to use the team's even-strength shooting percentage of 6.3% and the team's even strength save percentage of .936 (when Timonen is on the ice) in an argument for/against Timonen in the first place, as he has little to no control over them. Timonen's point total doesn't paint a clear enough picture re: how well he's controlling play while he's on the ice. What's there to look at, then? How Timonen drives possession through shot attempts for/against.

So let's do just that.

There has been a slight drop in Timonen's total TOI, as is expected; he's an aging blue-liner facing tough minutes on a pretty mediocre possession team. Timonen's TOI Quality of Competition is second on the backend only to Braydon Coburn, who Charlie has already discussed at length. He's still being worked hard. Despite having the second highest TOIQoC, Timonen has been the Flyers' best defensemen at driving possession at even-strength play. A Corsi For of almost 54% in close situations is really, really good.

It's hard to ignore Kimmo's O/DSt% of 56.9% - the highest of any Flyers defenseman by almost 3%. He's certainly getting sheltered due to his age and declining acceleration, and he's still one of PHI's most gifted defensemen in the offensive zone. One would imagine the offensive and neutral zones are where he'd get most of his zone starts.

So we'll need to dig deeper and take a look at how Kimmo affects the players he's on the ice with.

Timonen has been a huge contributor to Braydon Coburn's success; in 275:16 minutes of score-close together, the two have combined for a 54.2 Corsi For%. Yeah, that's really dang good. Away from Coburn, Timonen has been able to hold his own; in 82.1 minutes (yeah, small sample size), his Corsi For% is almost exactly the same as it is with Coburn at 54.1%. It appears that Kimmo Timonen is a bigger contributor to the success of the top pairing than Braydon Coburn (disclaimer: this is not a knock on Braydon Coburn).

It's not just about his defensive partner, though. Timonen positively impacts almost every Philadelphia forward from a possession standpoint. In fact, every single forward who has played at least 75 minutes of even-strength time with Kimmo Timonen has performed better than without him. It's pretty crazy. 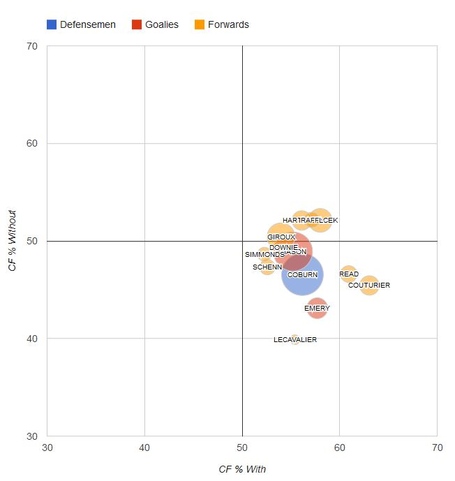 The size of the above dots are relative to the amount of even-strength ice time shared with Timonen. Sean Couturier has a 60.4% Corsi For (!!) in almost 200 even-strength minutes that he's shared with Kimmo. This team is a heck of a lot better at even-strength when 44 is on the ice; there's no doubt about it.

But how does Timonen stack up to comparable defensemen (by cap percentage) around the NHL?

Kimmo's right smack in the middle, between Duncan Keith and Erik Karlsson. The O/DSt% of all 5 of those players averages out to 54.8%, so, in terms of deployment, they're all being used in the same manner. Also: stop being so ridiculously good, Chicago.

Is he worth his extension?

A lot of people groaned at the idea of a 38-year-old Kimmo Timonen being the face of the Philadelphia Flyers' blueline for another year. Some have already written off the extension because of his (slightly) decreased TOI, decreased production and the higher frequency at which he commits minor penalties (due to aging/decreasing acceleration).

But it appears that, even after a rough start to the season, Kimmo Timonen is still Philadelphia's best defenseman at even-strength, and almost every single forward performs better with him on the ice. He's a monster at driving possession, limiting attempts in the defensive zone, and he's still remotely effective at quarterbacking the first-line power play. 44 is also performing on par with comparable defensemen around the league.

His slight loss of mobility due to aging has been properly compensated for by an increase in offensive and neutral zone starts. It's nice to see the Flyers coaching staff effectively counteract a potential problem.